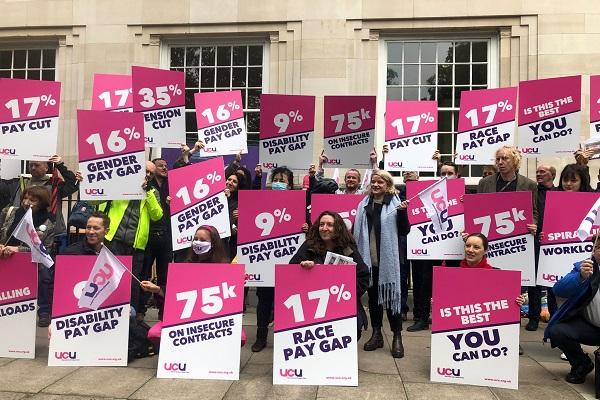 Friday’s UCU National Executive Committee (NEC) meeting was the first meeting of the newly-elected committee after Congress.  The General Secretary gave her report, which she also recorded for broadcast.

The General Secretary was questioned on the line in her report saying that new grounds need to be established for both the Four Fights and USS disputes. She replied that advice suggesting that the ballots would be vulnerable to legal challenges needed to be taken seriously, and that we should consider new grounds for dispute anyway in light of developments such as the imposition of USS changes on 1st April.

The danger is that this becomes another reason to justify the delaying of the ballots called for by the recent Sector Conference. These ballots can be simply authorised by HE officers but, so far, no officers’ meeting has taken place since Congress. Jo Grady said that UCU was ‘waiting’ for the HEC on 1st July, but an HEC decision is not necessary. If new grounds are needed, they can be drawn up quickly. UCU Left HE officers again made it clear that they are ready to meet with minimum notice to authorise ballots.

Jo Grady also argued that reaching the 50% threshold in an aggregated ballot was not good enough. She believes we should be aiming to achieve 60% or 70% turnouts, and that requires us to ‘pause and reflect’. Of course, it is true that winning a ballot requires a serious campaign, ideally starting before the ballot opens, but at the moment nothing is coming from HQ.

In other words, despite failing to win support for her strategy of increasing membership density before relaunching our national disputes, the General Secretary is still trying to postpone future action until next year at the earliest. The problem is not her opinion, but the danger of delay creating demoralisation and a fait accompli.

Apart from removing UCU from the growing trade union revolt against the cost of living crisis, which is set to include our sister education unions, it would leave an increasing number of HE branches – among them Dundee, Goldsmiths, RCA, Wolverhampton, De Montfort, Roehampton, Huddersfield – to fight alone against vicious attacks by their local managements.

The University of Wolverhampton dispute was made a dispute of national significance. The university is imposing wholesale course closures, halting recruitment of students and has launched a massive ‘voluntary’ redundancy scheme. This is a major attack on working class regional higher education.

A motion calling for UCU to support the legal challenge to USS crowdjustice campaign (L5) and engage with the members who have launched case was carried at NEC, so this is now backed by the entire union.

A late motion calling on UCU to submit a call to EHRC to extend Equal Pay claims to other protected characteristics (currently sex discrimination only) was ruled out of order on grounds it need not have been submitted late and it involved a significant amount of work.

UCU banners and delegations joined Saturday’s TUC demonstration called in response to the cost of living crisis. The demonstration was big and lively, and featured an impressive contingent from the RMT as they prepare for national strike action this week.

A range of unions are now balloting or preparing to ballot over the drastic falls in the value of the pay current being experienced by all workers. To stop the Tories and the bosses using inflation to further drive down wages and working conditions, we need to get behind the railworkers and do everything we can encourage a widespread workers’ revolt against the cost of living crisis.