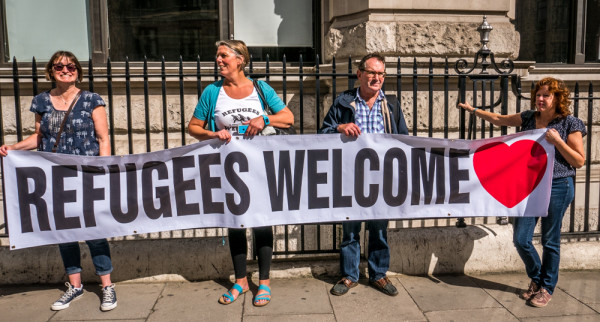 Two weeks to go to decide if Britain should remain in or leave the European Union (EU). Most UCU members in my workplace seem to favour remaining in the EU. Many cite the virulently racist nature of the leave campaign as justification to vote to remain. For many the thought of Boris Johnson, who is increasingly morphing into Donald Trump, leading the country is a frightening one.

Whilst I too share these fears I don’t except that the Remain campaign led by Cameron et al is less racist or less dangerous to working people. In fact the reason why I support leaving the EU is because every anti-racist and anti-austerity campaigner would be faced with a far more confident Cameron after a victorious vote to remain, itching to push through his privatising agenda.

The idea that Cameron is less of a racist compared to IDS or Johnson doesn’t match up to his history. Throughout his premiership he has continually played the race card. It was only a few months ago that he was blaming Muslim women for not ‘integrating’ and accepting ‘British values’. It is Cameron who has been at the forefront of attacking the welfare state, driving down living standards and cutting the benefits of some of the most vulnerable in society.

Is the European Union more progressive?

The fear of being accused of being a ‘little Englander’ has lured many of those on the left to come in behind the Remain campaign believing it to be a more of an internationalist position to take. But we only have to look at what is happening in the Mediterranean and the murder of refugees fleeing the impact of European backed imperial wars to see that Europe is not a frontier for liberation but a fortress Europe, blocking entry to those who desperately need help.

Greece also shows the true face of the pro-austerity core of the European Union. The Troika doing the bidding of the IMF and European bankers imposed a ‘structural adjustment’ programme on Greece reminiscent of that the IMF imposed on Zimbabwe in the early 1980s with the same inevitable consequences; devastating attacks on the Greece working class.

The ruling elite are evenly split over remaining in or leaving the European Union. At the heart of the argument lies a debate about the best way to reverse the historic decline of British capitalism, a decline that can be traced from the early 20th century as Britain lost control of its vast empire and Germany and the US became the economic powerhouses in Europe and across the globe.

In the 1950s the argument was between those who believed that they had to integrate with Western Europe to reverse this decline on the one hand, and those who believed Britain could continue to go it alone on the other. In the 1960s/70s it was between those employers who saw Europe as their key market in contrast to a minority who had their main investments in the US, where Britain was and is the largest overseas investor.

It is this concern, making British capitalism profitable and a player on the world economic scene, that drives the EU debate today.

It is out of these concerns that a European Union has emerged. A EU that is about driving forward the competitive interests of multinational companies and the financial sectors that support them. This comes with all the necessary measures intrinsic to the development of capitalist states; the ratcheting up of the rate of exploitation of working people through driving down living conditions and wages (ie an austerity programme), the support and financing of imperialist wars in the Middle East and Eastern Europe and the use of racism to divide the peoples of Europe though blocking the free movement of refugees.

Cameron, Johnson and Farage; the racists can be stopped.

It is the fear of racism that motivates many on the left to look for the lesser of two evils and leads many to support remaining in the EU. However both sides of the campaign have raised the level of racist hysteria around the issue of immigration to new heights. There seems to be unnecessary pessimism about the reasons why many working class people, according to the polls, will be supporting exit. It is not because they are all racists. Antonio Gramsci, the Italian Marxist, used the phrase ‘dual consciousness’ to explain how working people can hold contradictory ideas.

It would be a mistake to assume that either people are all racist or anti-racist. Life would be very easy for those of us who are in the business of winning people to challenging government attacks if this were the case. We would simply need to identify those who were anti-racist and join them. But we have all met people who are furious at the unjust nature of society. At the way the 1% take all the wealth that the 99% produce and at the same time hold the belief that immigrants are in some way to blame for their increasing immiseration. With the continual bombardment of anti-immigrant propaganda and being passive in the face of the barrage of attacks on their lives, many will feel that the anti-immigrant lies provide an explanation for their predicament.

This is why I think it is a mistake that Jeremy Corbyn and John McDonnell have not stuck with their previously held belief that the European Union is a bosses’ club and that we should leave. If they had done so they would have be able to provide an internationalist case for leaving the EU. They would have been able to connect with those working class people who are enraged by the austerity agenda of the government and at the same time challenges the lies about immigrants.

The danger is that by not providing an independent internationalist Leave position to that of the two main leave and remain camps it can play into the hands of Farage allowing him to pose as the person who speaks for the ‘working class bloke down the pub’.

Leave or remain, neither side of the employers have a solution to the economic crisis ushered in by the financial crash of 2008 let alone the historic decline of British capitalism. The splits in the Tory party reflect the deep divisions amongst the employers. They might seem that they are at each other’s throats (and indeed they do have a deep loathing for one another) but they are united by one key issue – any ‘recovery’ must not be at the expense of big business or the financial sector – it must be sucked out of those who work or who survive through living on benefits.

In the aftermath of the 1st World War the Irish poet William Butler Yeats penned the poem The Second Coming in which he warned that ‘the centre cannot hold’. Indeed to borrow from another Marxist thinker, Eric Hobsbawm, we live in ‘an age of extremes’. As the main political parties over a thirty year period rushed to the centre ground of politics across Europe and the US they have lost their purchase on the working class. Their politicians are seen as corrupt and out of touch with the concerns of ordinary people. From right to left we see new political representatives who claim that they speak for the poor and the oppressed. The more far sighted sections of the employing class will be having real fears about this and will be weighing up how best to protect their interests – either by lurching to the right or to the left – to ride the blows that are coming their way.

In or out the antidote is to unite and fight

The fall out of the referendum will be a significant political crisis for the government. Rumours are spreading fast that a snap general election may be called, possibly as early as Christmas. Therefore the day after the vote, in or out, the anti-austerity movement must continue to unite to defend living standards and against more privatisation if it is able to shape the direction of the struggle.

The best antidote to whichever racist wins the referendum will be to get onto the streets as soon as possible to show that a united working class, that is black, white, migrant, men, women, disabled and LGBT will not be divided.

As we head towards the end of the academic year many UCU members in HE will be striking alongside the NUT. UCU and the NUS have agreed to call a national demonstration at the beginning of the autumn term. And more possibilities for coordinated action across the education sector in the first ever cradle to the grave strike to defend working class education is becoming a real possibility.

The first show of this unity whatever side you are on the in/out debate will come just two days before the vote itself. The convoy to Calais on the 18th June will see tens of thousands uniting around the slogan ‘Refugees are welcome here’. Both Jeremy Corbyn and John McDonnell will be speaking in London seeing the convoy off.

Let’s make sure this day is a demonstration of working class unity based upon a real internationalism.

4 Replies to “Whoever wins the EU referendum, working class people will be faced with a renewed offensive on their living standards.”