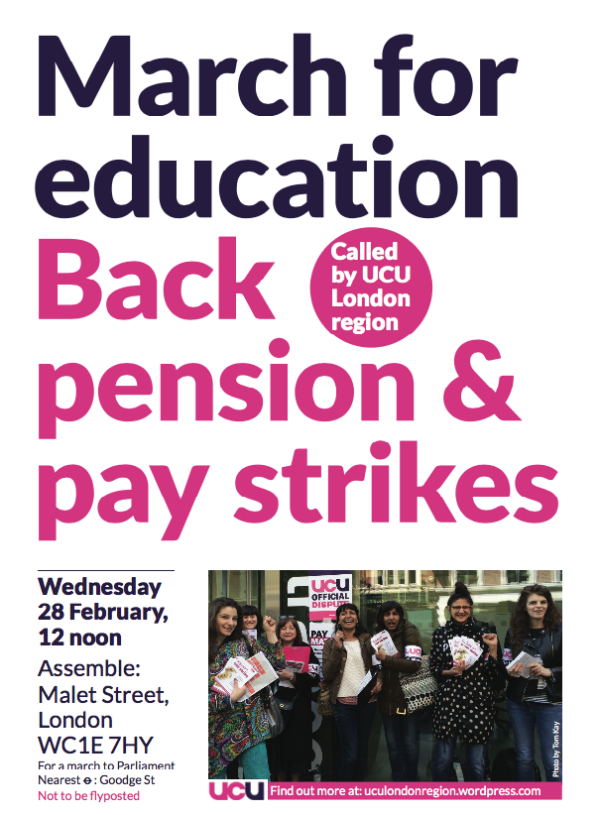 UCU members in 16 colleges have voted by 92% on a 63% turn out to take escalating strike action. The employers have been notified that the first phase of action will be a two-day strike on the 28th February and the 1st March followed by a second phase of 3 days of action within the following 28 days if management fail to make significant moves.

The first day of this action will be coordinated alongside tens of thousands of UCU members in 61 universities fighting to defend the USS pension scheme in higher education.

On the same day UCU London Region has called a march on Parliament and calls upon the whole trade union and student movement to join them.

The overwhelming vote for action reflects the deep frustration and anger which UCU members feel who work in the FE sector. Our pay has been cut by 21% since 2009. Our working conditions have worsened as workloads spiral upwards as a result of 15 thousand lecturers losing their jobs over the same time period. Because of this many of the UCU branches in the 16 colleges that are taking part in the action have also put in claims demanding progress to be made on observation polices, fractionalisation, teaching hours and holiday entitlement as well as pay.

It is ironic that the Tory’s attempt to make it even harder for trade unionists to take legal industrial action through passing the Trade Union Act a year ago has created a new layer of activists in the unions. The experience of trade unions when they have attempted an industrial action ballot has seen a very positive response. Where reps have implemented the UCU “Get the Vote Out” plan, backed up with imaginative publicity and use of social media, members have responded magnificently.

And it’s not just in the traditionally stronger branches where this has happened. The less well organised branches have also experience more people getting involved and joining the union. Epping Forrest branch got 56% turn out and 100% voted to take action. Havering branch achieved a 78% vote for action on a 58% turnout. Redbridge branch have gone from 30 UCU members to 80.

There are 56 local claims that branches have submitted to their employers many of which could be a part of a second wave of industrial action.

Members are determined that this battle will not go the way of the other pay and conditions battles in the past. We want change and we want it now. The AoC award of 1% simply will not do. Clearly the underfunding of the sector by successive governments has left many colleges finding it difficult to make ends meet. But we know that the money is there both at a governmental and college level.

The government can find £1bn to bribed the DUP and another £40bn to exit Europe. The new supergroups that have been created across the country have significant turn overs and reserves. Not all in the sector have faced cuts to their living standards. A small minority of senior post holders have been awarded lucrative salaries rising to hundreds of thousands of pounds. The money is there to pay all who work in the sector a decent living wage and to resource decent working conditions.

Already some employers have made moves to try and head of action. The Redbridge College employer has reportedly offered a 6% award worth around £2k a year. At Epping college offered a 3% pay rise but members are unhappy with this because it is linked to achieving a better OFSTED grade.

Whilst this battle is about getting better pay and conditions for lecturers the massive mandate for action was also motivated by what many see as the wrong direction that the sector is heading in – the stack them high, sell them cheap model is one that many revile.

Rush collections and solidarity messages to: