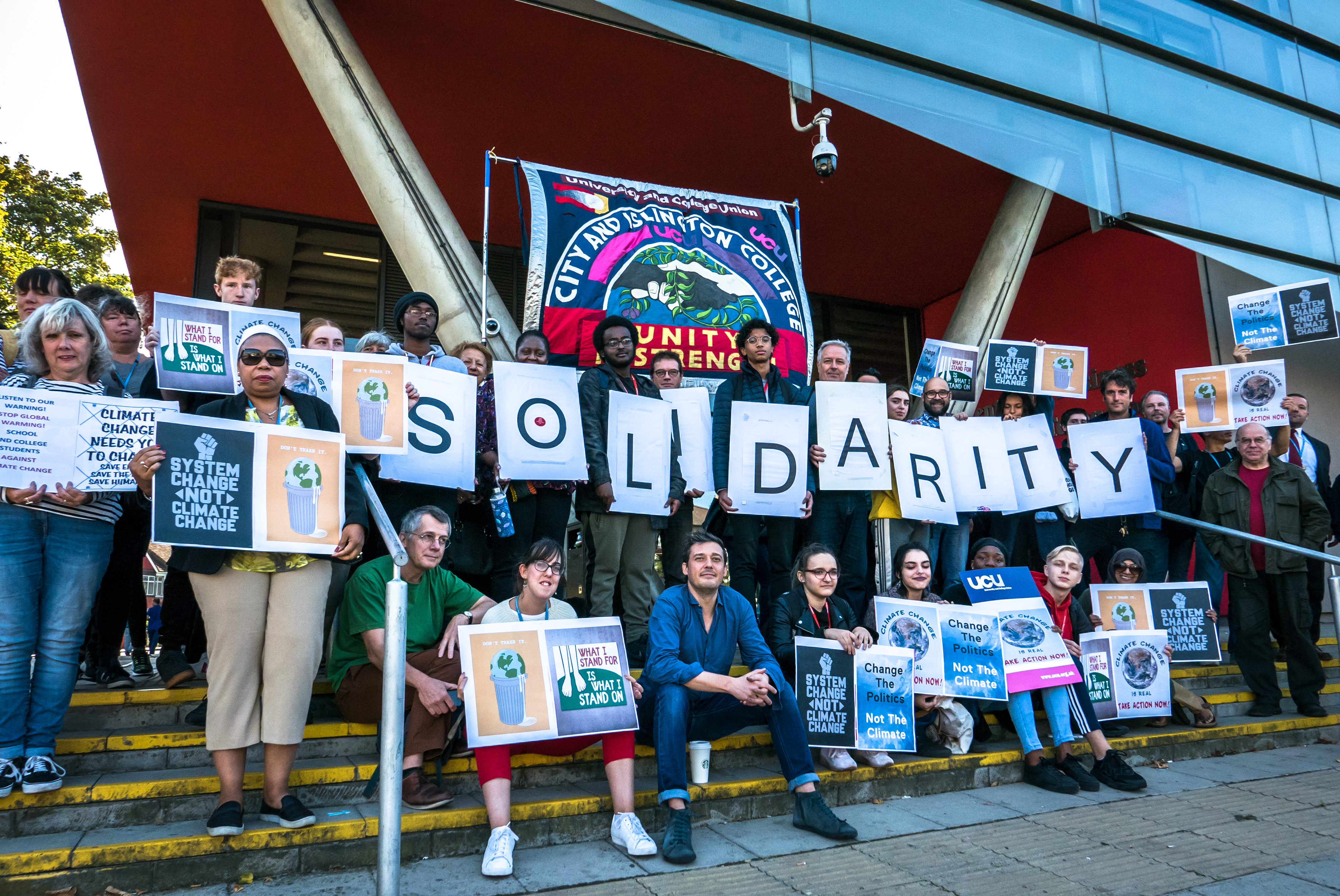 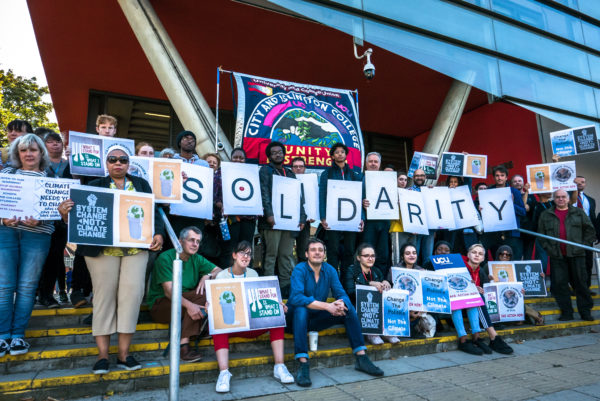 September 20 2019 will go down as an important moment in the campaign for climate justice. On the morning of the 20th, going through my Twitter feed at 7am, it was already clear that the day was going to be of historic importance. Reports flooding in from Australia where hundreds of thousands of school students were pouring on to the streets, was moving. Continuing to scroll through my feed, further reports came in from Australia and Tasmania of workers joining them – dockworkers striking in solidarity with the school students.

By the time I left the house that morning, it was clear that the global climate strike was going to be a game changer.

An estimated 3.5 million school students protested around the globe – 163 countries and still counting. From Kabul to Kenya and from Fiji to Delhi school students defied authorities and took to the streets.

But what was different about this #FridaysforFuture strike was that the school students did not stand alone. It is difficult to measure exactly how many workers took some form of action on the day but across the globe you can safely say it was the biggest trade union response so far.

400 stevedores from Hutchison Port in Australia stopped work between 10am to 2pm to join the school students. Thousands of Amazon workers, organised in a new network called Amazon Employees for Climate Justice, walked off the job in solidarity with students and over the inaction of Amazon to respond to the climate emergency. 3,000 walked out in Seattle.

In Britain it was a historic day. It was the biggest ever trade union action over climate change. Tens of thousands of civil servants, local government workers, teachers, rail workers, hospital workers, lecturers, bus worker and postal workers took a myriad of actions and protests to demonstrate their solidarity with the school students’ action. Some walked out, others organised lunchtime protests and workplace events to demonstrate their support.

The key point here is not if workers took unofficial strike action or not on the day; it is the fact that tens of thousands of workers in the UK took action in solidarity with the school students as organised labour.

I am proud that it was UCU that led the call for solidarity within the trade union movement and delivered the action that was necessary. Well over a hundred colleges and universities took action on the day. UCU worked with organisations like the Campaign Against Climate Change Trade Union group  and with UKSCN who helped to build momentum to gain support for our TUC motion.

Whilst the 20th protests were not as big as the antiwar protests in 2003, the momentum is in that direction and more importantly the response from organised labour was bigger.

School Students – a history of resistance. 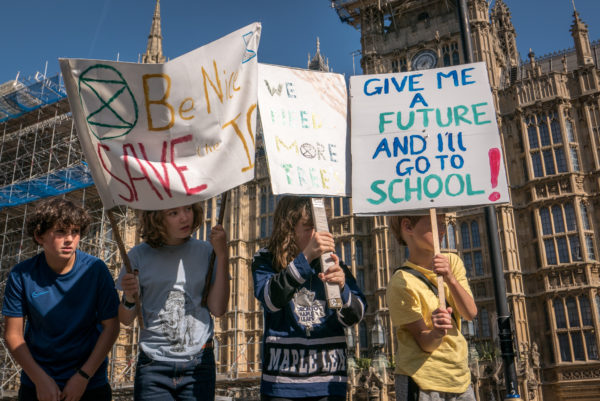 In the recent past it was too often common to hear, within the labour and trade union movement, older trade unionists complain that young people weren’t political, that they were self-interested and more concerned about their looks and their latest electronic gadgets than they were about the world they live in. Even when it was acknowledged that on a rare occasion, young people had taken some form of action, it was often disparaged as individualistic and lacking in understanding of the collective power that workers have.

But it is very clear that the trade union movement owes a great debt to the school student movement for reminding us what collective power looks like and giving confidence to workers to follow suit. Greta Thunberg is quite an extraordinary political leader. It is strange to see world leaders falling over themselves to have selfies taken with a sixteen-year-old girl with Asperger’s, who keeps telling them that they are destroying the planet and they are arses for doing so! On the other hand, powerful organisations and right-wing media outlets are working overtime to try to undermine her, by encouraging vicious bullying about her physical appearance and her parent’s motivations.

The rich and powerful do not know how to deal with her. They are fearful of her and the mass movement she has inspired.

Throughout history school students have played a central role in resistance. In 1976 in Soweto in South Africa it was the heroic struggle of Black school students in defiance of the imposition of Afrikaans in schools – the language of white rule – which took the struggle against apartheid to a new level. Leading eventually to the collapse of the racist Apartheid regime and the release of Nelson Mandela. It is in this tradition that our school students’ today stand.

Of course, this is not to say that we do not have work to do to deepen this revolt for climate Justice within working class communities. Clearly the protests are not led by, as some disparagingly describe it, ‘Bourgeois on Bicycles’. 20 September revealed a much wider layer of not just trade unionists but also working-class school students participating. But the movement does need to reach out further.

In the run up to the 20th out of seventy GCSE English students that I teach, only four had heard of Greta Thunberg and only a few more knew about what was going to take place on Friday 20th. They may not have known about the movement but they were all very knowledgeable about this issue of climate change. They knew about the science and the arguments that lay behind the science. This is not something that is often taught in schools.

They have found out about it through talking to their friends and through social media.

It is important to understand if we are going to be able to engage a wider layer of working-class students and encourage them to join the movement, and we should not patronise them, presuming they are ignorant of the issues. Most do understand the issues and the threat posed by climate change, but are often lacking in hope, derived from experience, that change can happen and action to tackle climate change can occur. 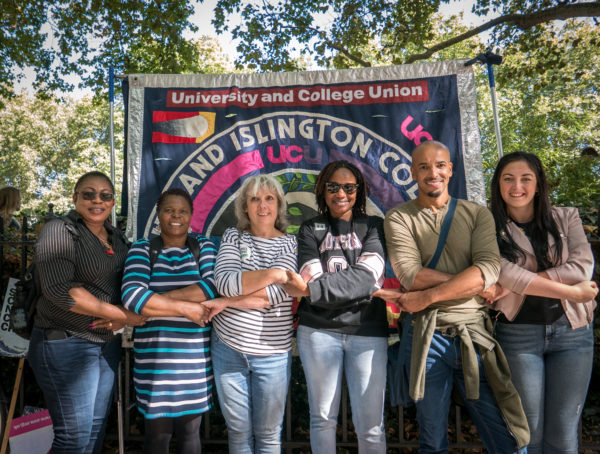 Climate Change is a class issue. A recent opinion poll revealed that the majority of people in the UK believe that action to tackle climate change must be a government priority. Whilst the devastation wrecked by climate change knows no boundaries and affects us all. Those who have contributed least to the problem, in the poorest and richest parts of the world suffer the consequences of climate change the greatest. It is only the working class who have the ‘self’ interest as a class to resolve the climate crisis. The multinational fossil fuel companies are only concerned about profit margins and not the impact their industry is having on the planet.

Political strikes do not stay at the political level. They often quickly feed into the economic concerns that workers have. For the vast majority of workers that took some form of action on the day, whilst the issue of climate change was a central one, they carry with them one hundred and one economic concerns brought about by over a decade of austerity.

The slogan of striking PCS workers from BEIS on the demo was , ‘for a living wage on a living planet’. UCU members at Nottingham College, who are taking 15 days of strike action over the imposition of new contracts, struck on 20 September too.

The confidence and enthusiasm shown on Friday will feed back into the confidence of people to fight economic issues. It will be interesting to see the results of the UCU pay/pensions ballots in HE of those who took some form of action on climate. 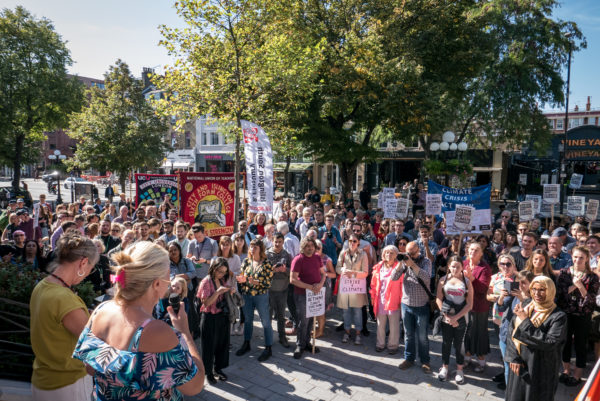 We don’t have to look too far back in history to see how this can happen. In 2010 students protesting over the raising of fees and the cutting of Education Maintenance Allowance directly built the confidence of the trade union movement leading to the biggest one-day strike over pensions involving 29 unions and 2 million workers. Unfortunately, it was cut short by the leaderships selling a shoddy deal. The next step to linking the campaign for action on climate change and against austerity will be in Manchester outside the Tory Party conference.

What we saw on Friday was that achieving climate justice is ‘mission possible’. But if the movement is going to be transformed then we need more political strikes. Extinction Rebellion is launching its next round of action on 7 October. We need to make sure that unions mobilise for these events. We must also continue to educate our movement.

Many schools on Friday in response to the call for workplace campaign action turned their classrooms over to teaching young people about climate change and organising inspiring events. At my college we will be launching a themed learning week on Climate Change, Power and Society. The NEU, NUS and UCU have organised a conference on 12 October, ‘Climate Emergency – Education for the Future’.

There will be further calls for solidarity action to join school students strikes. Next year the UK Climate and Trade Union movement will need to take seriously its responsibility to mobilise for COP 26 (UN Conference of the Parties), the UN talks organised to take forward the Paris Agreement, which will be held in Glasgow in 2020. Witnessing the inspiring demonstrations and strikes on Friday that took place across Scotland those attending the COP look set to receive a warm welcome!

The school students have taught us many important lessons over the past year let’s see if we can become as dedicated, ambitious and bold as them – we have a world to win.