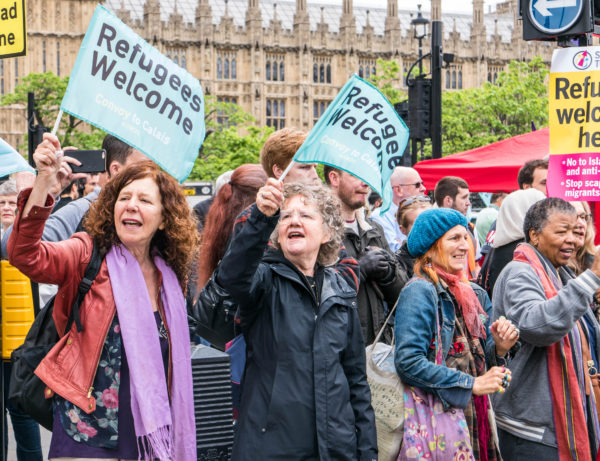 The horrific murder of the Labour MP Jo Cox is a moment that has revealed how racism, stoked up by mainstream political parties and media over fears of immigration, can lead to violent extremism. As Jonathan Freedland states in an article in the Guardian, ‘if you inject enough poison into our politics, somebody will get sick’.

Thomas Mair, the man who shot Jo Cox, shouted before he did so, ‘Britain first’ the name of a fascist organisation set up by ex-members of the British National Party. He had links with far right and fascist organisations in the US and South Africa. When asked his name in court he replied, ‘My name is death to traitors, freedom for Britain’.

Whilst the press coverage has been full of remorse for Jo’s death and denunciation of her killer, not surprisingly there has been no self-examination of their role and the consequences of creating a climate of fear and hatred towards those fleeing war and persecution and those who try to help them.

It does not take much imagination to visualise the headlines if Jo’s killer had been non-white and shouted, ‘Allahu Akbar’ as he shot her to death. The headlines would be ‘Islamic terrorist kills politician’ and there would be articles calling upon the government to copy Donald Trump’s call by banning Muslims from coming into Britain.

Some of the media commentary has pointed to the vile anti-immigrant hysteria that has been whipped up during the EU referendum campaign. The latest example of this was Nigel Farage’s overtly racist Brexit campaign poster that shows a queue of refugees supposedly trying to get into Britain with the caption, ‘Breaking point’. This is true. However, the reality is that this kind of racist narrative has been developed over many years.

This includes the continued lies about how immigration has created the crisis in housing and the NHS. Lies that the cuts in our wage packets are due to immigrant labour providing a cheap source of labour for the employers. More recently a sexualisation of anti-immigrant racism has been developed. Child sex abuse, according to the tabloid press, has become synonymous with gangs of Asian (Muslim) men grooming white girls. Nigel Farage’s recent comments that remaining in the EU will lead to more attacks on women like that which took place in Cologne on New Year’s Eve is another example of this sexualisation of anti-immigrant racism.

A racist narrative years in the making

The press has consciously set about trying to provide a scapegoat for the inability of the employers and government to address the deterioration of working people’s living standards. The constant drip, drip, drip of lies about the impact of immigration has meant that according to a recent opinion poll people believe that 35% of the population are immigrants when the real figure is only 13%.

I was looking back recently at some of the GCSE English resources I have used over the years. One is a lesson about identifying political bias within the press where I give students five headlines about immigration. Their task is to work out which newspapers they are from. One is, ‘Asylum seeker ate my Donkey’. No prizes where this came from!
The Tory party has fed these fears through their propaganda and pernicious laws like Prevent. Labour, in office and when electioneering, has too often echoed these anti-immigrant views.

It is in this context that Jo’s murder took place. She was a principled Labour politician who campaigned to build solidarity with refugees and to try and reverse the Tory government’s racist policies. Because of these views she was targeted by a racist who gunned her down. Yes, Thomas Mair might be a ‘lone’ fascist supporter with a history of mental illness but this does not disguise that fact that he was a product of a society that allows its press and political parties to spew out racist lies about immigrants.

The editors of these newspapers and the campaign managers might not have pulled the trigger that killed Jo but they must take responsibility and be held to account for their role in creating a climate of fear that gives birth to extremism.

Luckily, despite this constant barrage of xenophobia, the vast majority of working people do not hold these racist views. Despite what some of the liberal journalists who write for the Guardian might believe, those Labour supporters that are going to vote to leave the EU are not defined by anti-immigrant racism.

John Harris’s interviews for the Guardian with Labour supporters in Stoke, who are going to vote to leave, reveal they will do so not out of racial hatred towards immigrants but to give Cameron’s Tory government a kick in the teeth for all the hurt and pain they have suffered under their rule. Their leave vote is an anti-austerity vote not an anti-immigrant one. Just like those in Scotland who voted for independence, they did so not because of some virulent nationalism but because they despised the Tory government and all that they stood for. 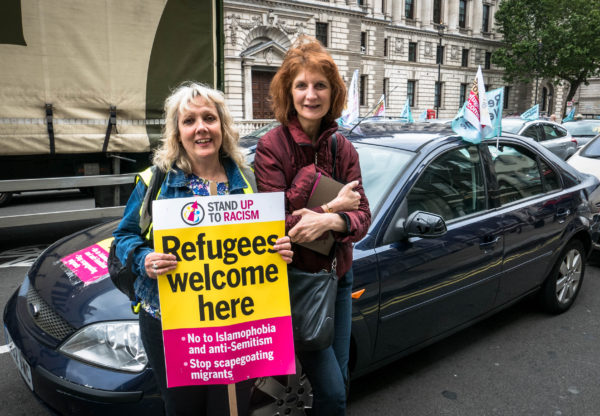 City and Islington College UCU members about to set off on the convoy to Calais.

On Saturday a convoy of over 200 hundred cars, vans and lorries attempted to cross the border to France. They were hoping to take food, clothes, medicines and money to the refugees in Calais. Thousands of people had collected from tens of thousands of others across Britain to show their solidarity with the refugees stuck at the border.

These people and their actions symbolise the real humanity of working people in Britain today. Is was a moving sight to see the convoy set off from central London to try and break the French authorities’ ban on them crossing the border into France. Once again we see the inhumanity of those who control fortress Europe in which the movement of capital goes unchecked. Whilst people trying to help those who are doing what humans have always done, ever since the beginning of civilisation, -migrate – are forcibly prevented from doing so.

The outcome of the EU referendum will not silence those who wish to divide us.It is the internationalism and solidarity shown by the convoy that can begin to undermine the establishment’s climate of fear.

1 thought on “Those responsible for creating a climate of fear over immigration must be held to account.”