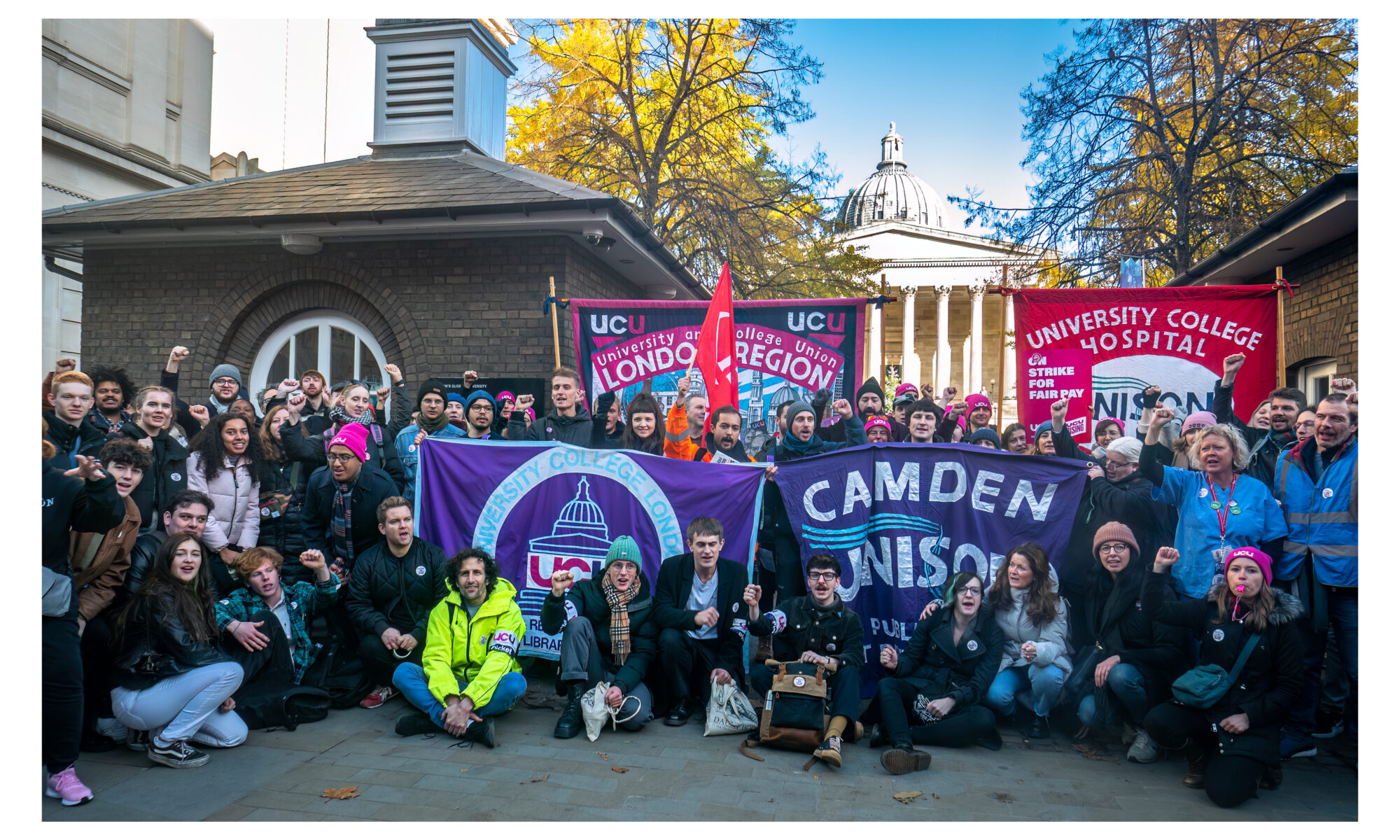 Twenty twenty-two will be remembered as the year that organised labour returned. More strike days have been lost since the summer than any time since 2011. Perhaps more importantly than the numbers is the attempt to coordinate the action across different unions. We have seen rail and postal workers strike on the same day as nurses and higher education workers.  The question that faces the movement is – will we coordinate and escalate our action in a way that allows us to win?

More unions are set to strike in 2023. February has been pencilled in as the month in which up to half million workers could coordinate their action including 350,000 teachers.

Predictably the media and press have responded to the strikes with the usual attempts to blame the strikers for ruining Christmas and putting people’s lives at risk.  Despite their relentless attempt to divide the ‘public’ against striking workers, polls show that the majority of people support those taking action for more pay and to protect services.

The government and the employers have significantly lost the battle for the ‘hearts and minds’ of the public.

Commentators speak of the return of strikes as a central part of daily life as a turning point. However, if this is to be a turning point that benefits the working class as a whole then we need victories.

There have been some very significant victories especially in the private sector. Liverpool Dockers, Bus drivers and Barristers. These victories are important, demonstrating the power of hard hitting strike action over a quick period of time. However, they do not generalise in a way that lifts the whole of the class, as would be the case if the current national strikes won.

The stakes are high for both sides. We only need to look to Italy and France to see what happens when strikes don’t succeed in improving working peoples living standards – the far-right feeds on despair.

The government and employers are digging in. They are doing so because they are desperate to keep profit margins high at any expense. The Financial Times surveyed 100 leading economists, the vast majority of which believed that the UK will have the longest recession compared to other G7 countries.

They recognise that a victory for any one of the groups of workers taking national action would open the floodgates. It is one thing for a local employer to concede to local demands but completely another for government and employers to reach a compromise with a union taking national action. For them this is more than a battle about keeping pay below inflation.

The arguments put by governments and the employers are simply not convincing. The usual tropes of ‘wage rises cause inflation’ do not cut it. The obvious wealth inequality that exists in society is well known.

What creates such rage about this inequality is not simply that the rich are getting wealthier whilst we are getting poorer but they are doing so at our expense!

The government and employers are becoming increasingly aware that what lies behind the solid support for the strikes is a much bigger desire among the public than simply seeing workers win a pay rise which keeps up with the cost-of-living crisis.

The inability for the government and employers to win ‘heart and minds’ doesn’t simply lie with pay inequality. It is also because the ‘public’ want to see a more democratically run society which prioritises public services which deliver for society and people.  One in which profit margins must not be the concern for a national health service, rail network or a postal service.

The strikes have also highlighted how unhappy people are at work. The bullying managerialism that is rife in every workplace, the long hours and the struggle to maintain a work/life balance, are all leading to significant increases in physical and mental ill health.

In short, the government and employers are becoming increasingly alert to the fact that a deal that would be considered by the public as a victory would not only be a victory for increased pay but a defeat for everything this government, and all the ones that preceded it over the past 40 years, have stood for – the zealot like belief in the market, competition and profit as the only way society can be run effectively.

The strikes give the public a glimpse that it ‘is not necessarily so’.

Never been a better time to fight and win.

If you add to the mix the skill shortages in key sectors like health, teaching and social care and you have an explosive combination, which puts those who are fighting back in a good position to win – or should. All the arguments that are usually put forward by union leaders that we can’t escalate because we don’t have ‘public opinion on our side’ or, ‘members aren’t up for indefinite action’ or ‘the government/employers are too strong and united’ are ones that clearly don’t hold today, if they ever did.

Incredible ballot results, solid strikes, lively pickets and excellent solidarity all demonstrate workers are up for taking significant action including indefinite action. The government is clearly weak and divided. If they called an election around the theme, ‘who runs the country the government or the unions’ as Heath did in 1972, Sunak would get the same answer…

As for public opinion, unions, union leaders, strikes and coordinated strikes have never been so popular. The role played by the dreadful Starmer – not supporting strikes and disciplining Labour MPs who appear on picket lines – has allowed the Mick Lynch and other trade union leaders to fill the political vacuum left by a rightward moving Labour leadership desperate to prove that they are fit to govern.

However, although a useful sign of the weakness of the government’s position, unfortunately public opinion does not win strikes – more strikes and solidarity do. The Great Miners’ strike of 1984-5 highest recorded public support for the miners was 35%. But this was not the reason why the miners lost. It was the failure of the TUC and Labour leadership to turn that 35% into solidarity strike action.

The high levels of support for the strikes at the moment can quickly evaporate if they are not pursuing a strategy that is clearly putting the government and employers under pressure.

Bring down the Tories: Make the country ungovernable.

We are in a very good position to win. But to do so we will need to take the action that can win. The government and the employers are working together to ensure that they inflict a serious defeat on the rail and postal workers to show others thinking of doing the same that they too will be crushed if they follow. Just like after the miners defeat in 1984/5 trade union leaders will be lining up to tell those arguing for action, ‘if the rail or postal workers can’t do it – what chance have we?’

The government appear to want to adopt tactics learnt from the past. The government response to the 1926 General Strike was to pass laws to make it easier for the employers to break the strikes, make scabbing easier and use the army. However, the government victory came not from new laws but because the TUC, supported by the left-wing TU leaders, called the general strike off on the seventh day. This left the miners to fight alone leading to an unnecessary devastating defeat. The debate about the defeat of 1926 General strike is pursued here in this interesting debate between Duncan Hallas, leading member of the SWP and Tony Benn (sadly, both now passed) – it’s worth a watch. Tony Benn & Duncan Hallas: Lessons of 1926 General Strike

It is clear that Sunak is preparing new trade union legislation to make it even harder for workers to take legal strike action. Worryingly, Paul Novak, the new TUC GS, response to these new laws is to threaten to take the government to court. This strategy clearly will not work and its failure will not only make it even more difficult for workers to withdraw their labour but it will leave those who taking action potentially isolated.

We’ve been here before….

To maintain the level of support from the public as well as from the workers who are taking strike action there needs be a strategy which convinces that victory is possible.

There are times in which merely the result of an industrial action ballot is enough to bring the employers back to the table and agree a significant deal. Or a few days of action can force the employers to back down. But we can’t play by the same old rules using the same strategies. Their side isn’t neither should ours.

As argued above, currently the stakes are too high for the government and the employers to respond to significant ballot results or one- or two-days action. The employers are prepared to ride out several two day strikes over a period of months. The government and employers have held the line.  The RMT and CWU are right to shift to calling more sustained action over a shorter period of time.

This doesn’t mean that the government and employers can’t be beaten. They can. But to do so we have to raise the stakes ourselves through prolonged strikes over a shorter period to make the country ungovernable. This would increase the pressure on government, challenge their current strategy of waiting out strikes and provoke divisions amongst their side as some sections of the employers would fear increased crisis and rising and generalised resistance across society.

It doesn’t automatically mean that to win workers have to take indefinite action for months and months.  In fact, if the postal and rail workers had taken all their days of strike action all in one go over a week or two-week period it is very likely the government and the employers would have conceded by now.

For workers taking strike action to sustain more prolonged action over a shorter period it will take, out of necessity to facilitate such organisation, more active participation of those on strike with the decisions and running of the disputes through strike committees.

Without such organisation prolonged strike action will be far more difficult to achieve.

For those who are about to enter the field of battle the lessons to draw from the action so far is not to adopt ‘smart’ strategies, or look to limit days of strike action over a long period of time. The government and employers and prepared for that. What they are not prepared for is sustained action including indefinite action over a matter of weeks.

Coordinating and escalating on this basis will put real pressure on the government to concede as employer’s fear where this action might end if concessions aren’t made.

If 2023 is to be the year remembered as the year in which workers won then we will need to take the action that can deliver that victory.