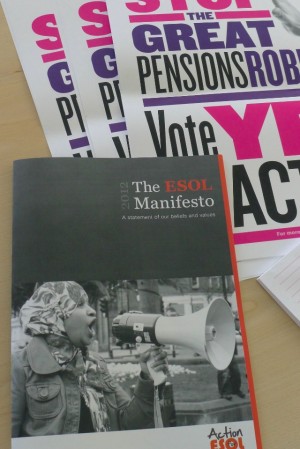 Action for ESOL (English for Speakers of Other Languages) launched its new manifesto for ESOL on Saturday March 3rd at UCU Head Office in north London.

A good turnout included MP Heidi Alexander, representatives from the Refugee Council, Migrant Workers Association and other partner organisations, along with ESOL researchers, teachers and UCU members from FE colleges in and around London and the Midlands.

The purpose of the launch was to celebrate the success of the campaign and to look at the new manifesto and how it can be used in future ESOL campaigning. The afternoon started with a celebratory journey through the campaign highlights and the people and protests which helped to bring about the huge success.

A wide-spread grassroots campaign led by students and practitioners, combined with the support and parliamentary lobbying of education organisations such as UCU, NATECLA, NIACE and many MPs around the country, all contributed to an almost total U-Turn on the coalition government’s plans to cut funding for ESOL learners.

Heidi Alexander MP told the launch how she was inspired after meeting students at a local Lewisham community centre and reading letters from students in Lewisham who explained why English was so important to them and why they needed to be able to continue their ESOL classes.

A video was shown, made by Reflect ESOL, of the fantastic Old Palace Yard demonstration outside parliament on March 24th last year, when ESOL students marched from the protest to hand in a petition to Downing Street with over 20,000 signatures, including Noam Chomsky, Ken Loach and Ken Livingstone.

All speakers celebrated the campaign’s success and the inspiration of all the students round the country who explained powerfully why ESOL matters.

The 2nd part of the launch focussed on how the manifesto was written and what it’s about.

Like the campaign itself the manifesto was initiated by practitioners on the ground in a collaborative process and the issues set out in the manifesto for ESOL centre around the issues faced by migrants, needs of students and ‘production-line’ teaching, marketisation and labour-market agendas, valuing the role of teachers and their input into curricula, and commitment to consistent funding.

These issues for ESOL are fundamental to how practitioners see what ESOL is and where it should be going. These same issues affect the wider FE sector, and elements of the ESOL manifesto are recognisable in other FE manifestos such as the UCU paper – “Jobs and Education, Regaining the Trust of Young People”.

Action for ESOL is now looking to the future and ways to continue the grassroots aspect of the campaign by involving students in the manifesto as its taken forward from the today’s launch, and how the ESOL community can unite around the common issues and links it has with the wider Adult, Community and Further Education sector.