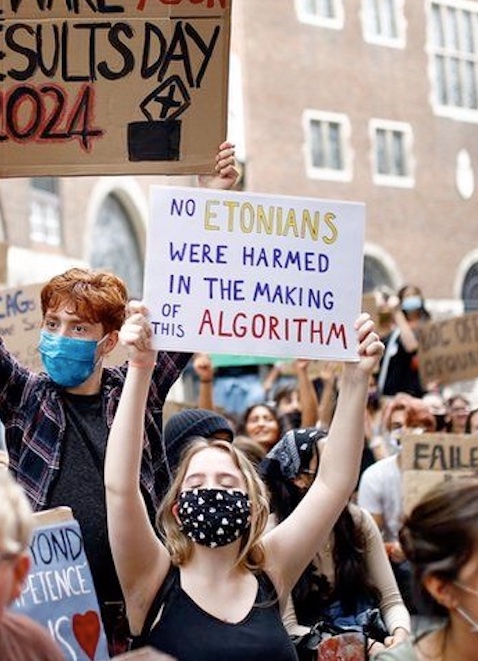 The U-turn made by the government in allowing teacher assessment to grade A levels and GCSEs is a huge victory for working class students and their families.

This has been achieved through student and parent rage and protest. The government had demonstrated its complete contempt for the young working class. The A level exam results fiasco is undoubtedly one of the great educational scandals of our age. The fear of even greater protests after GCSE results were due on Thursday made the government and OFQUAL think again about using its ‘algorithm’ to grade 100,000s of students.

An apology is not good enough. Williamson should resign and OFQUAL should be abolished. I have no sympathy for OFQUAL – it’s a willing accomplice of government and should be scrapped.

This is not the first time that the exam system has been shown to institutionalise class bias in its chosen method of assessment – see here. In 2012 students received lower grades to avoid ‘grade inflation’, despite sitting the same exam but at different times. Awarding bodies were told by government to reduce the grades. I seconded the NUT (as it was then) motion at the TUC conference on behalf of UCU (passed unanimously) calling for students’ work to be regraded and for an enquiry into the scandal. Whilst the devolved nations ordered their awarding bodies not to reduce the grades, the English government did not unfortunately follow suite.

Then, as now, what this crass attempt to rig the exam results did was to shine a light on the corrupt and biased method of exam assessment. Thousands of students and parents for the first time can see how blatantly the assessment model favours the children of the wealthy.

As the placard of one student demonstrating outside Parliament this week read “I’m more than my postcode”.

What makes this year’s attempt to rig the exams even more callous and blatant is the fact that it has been brought about under very unique circumstances – the public health crisis. Many of those who teach in the sector, as soon as OFQUAL announced its method of assessment when all exams were cancelled this summer, argued that it would lead to students from poorer and BAME backgrounds being discriminated against. As Marian Mayer points out in her blog:

So why is such a clearly biased method of assessment preferred? The public health crisis has exposed its inequality (as it has for many other social issues) but this assessment method is used year in year out as Melissa Benn explains:

Rather than using a system known as “criterion-referencing”, where students are awarded a grade in any given subject according to whether they meet an agreed standard, students’ exam grades are instead decided every year in reference to each other – an arrangement called “norm-referencing”. Many teachers have long despaired about explaining to students that their results depend not just on their own efforts, but on how well or badly others in a year group have performed.’

This is all done in the name of controlling the great evil of ‘grade inflation’.  It is at this time of year that the right-wing media decry the achievements made by working class students as more and more achieve 8/9s in their GCSEs and A*, As in their A levels.

Teachers, against many of their best instincts, have got on with implementing the exam-oriented syllabuses and have become adept at getting young people through exams. No longer is the A*/A grade or a 9 simply the domain of middle-class children; many more working-class pupils are achieving these grades.  Rather than celebrating these achievements we find that year on year, egged on by the Telegraph and Mail, governments say that this can’t be right, the exams must be too easy.  “How can our universities tell who is really suited to attend when everyone gets good exam results?”, they complain.

Governments have tried a number of different ways to sift out the ‘really able’ student who truly merits being at university. For example, they introduced the A*. However, teachers have drilled their students too well and the ‘wrong types’ were still getting A*s.

This is of course very useful for the government.  They will now be able to claim that the raising of fees has not deterred young people to apply to university – there are plenty of places left – students just can’t get the required grades, they will argue.

‘Grade inflation’ we are told by those who have been the main drivers of test mania in education, must be driven down! It is a nonsense, they cry, to expect a year on year rise in GCSE/A level grades. The exam boards therefore each year work out ways to rig the exam results to ensure that significant numbers of young people do not get the good grades that they should have.

By controlling who gets to university and who doesn’t Johnson and his Eton friends maintain control over the pathways to power and wealth.

Of course, measuring student achievement with other students in a year group is not done on a level playing field. Working class students are measured against those who attend schools that have facilities that students from working class backgrounds would find hard to even imagine.

Eton for example has 1,200 pupils and 160 teachers – that’s an 8:1 ratio. They have a School Library, which provides over 30,000 resources. It has twenty-four science laboratories. Every student at Eton College has his own study-bedroom and their own private space where they ‘can entertain friends’. Half of the pupils have their own chefs and their own house dining-rooms and ‘every house provides a mid-morning Chambers snack and a mid-afternoon boy’s tea’.

Needless to say, the curriculum that is on offer is extremely diverse. There is not a hint of narrowing down the pupil’s education to ‘employability’. In fact, a diverse curriculum is seen as essential. The Music department at Eton consists of:

‘a purpose-built orchestral rehearsal room, recording studio, computer room with twelve PC workstations, a pre/post-production suite, rock band studio, electric guitar teaching room, and twelve other teaching and practice rooms. While the facilities at the old building has been rebuilt and consists of three floors of teaching, rehearsal and practice rooms, together with a 250-seater Concert Hall, academic teaching rooms, a library and an organ room. Currently, there are 122 Music Scholars and Music Exhibitioners at Eton College.

Over 1,000 music lessons are taught each week by a music staff of seven full-time masters and over seventy visiting teachers; instruments range from sitar and tabla to the full range of orchestral and solo instruments.’

The pupils’ fitness is also well catered for. There are Badminton courts, ten squash courts, 12 tennis courts and a 25m indoor swimming pool all set in 400 acres of land that, ‘ has 22 groundsmen, gardeners and estate workers who maintain and manage over 400 acres of land varying from prestige sports surfaces to wild flower areas, hay meadows, historic gardens and over 4000 mainly indigenous trees.’

I wonder how our students would fare if they were given access to such facilities and support. But unless parents have £42,501 spare per year to spend on their kid’s education, we will never know.

This is why students were right to take to the streets to show their rage to the blatant attempt to maintain class privilege. They were also right to demand that colleges and universities honour their offers, award teacher assessment grades and abolish the ‘algorithm’.

Now we need to fight to ensure there is no return to the exam factory.

This means raising our alternatives to the elitist education system based on marketisation and competition.