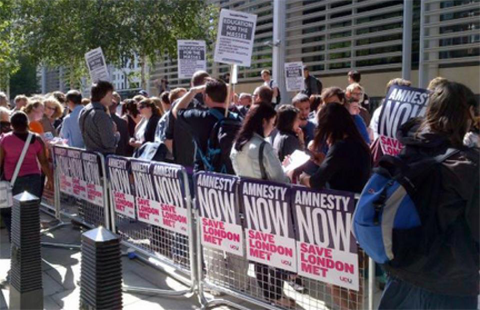 NB – Mark was unable to complete the speech in its entirety and a small part of the speech towards the end was left out when proposing the motion.

Just over two weeks ago thousands of international students studying at London Metropolitan University – my university, woke up to a headline in the Sunday Times that said their leave to study in the UK was to be withdrawn, and that they only had sixty days to find another university or they were to be forcibly deported.

In one stroke of a pen the Government (via the UK Boarder Agency) blighted the lives of over 2,500 international students.

As Ed Balls put it yesterday – ‘This is absolutely disgraceful’!

These aren’t just stats. These are people just like you and me, trying to better themselves and support their families and communities.

They are like Dean, a student on my MSc Computer Forensics course. Dean is from Nigeria, and he has already successfully studied and passed a pre-master’s degree in Computing at London Met. He should now be about to start his seconder semester on his MSc.

So far Dean and his family have paid over £15,000 in course fees. He attends class. He has passed all his exams. His English is excellent!

He is half-way through his course and he doesn’t want to change university. He wants to stay at London Met with the lecturers he knows and his student friends – and he should be allowed to do so!

On receiving news of his predicament Dean phoned his family in Lagos to try and explain the dire situation. His father suffered a heart attack as he absorbed the terrible news!

Dean is now scarred to leave the country to see his seriously ill father as he thinks he will not be allowed back to complete the course he and his family have sacrificed so much for. This is an absolute outrage!

Dean is not ‘BOGUS’, or a ‘SCROUNGER’, or an ‘ILLEGAL’, or any of the other filthy, racist abuse spewed by bigoted Tories and their right-wing friends in the gutter press. The very language that gives succour to the racists and fascists of the EDL and BNP as they attempt to divide us.

Well, I’m PROUD that Dean and his fellow international students are in my class. We all benefit from the different geographical, cultural, and social perspectives that such students bring.

I’m PROUD that London Met has the most working class and ethnically diverse student body of ANY UK university, and that we host the TUC archive and the internationally acclaimed Women’s Library.

And I’m PROUD that we defend multiculturalism in the face of attacks by Cameron and friends. Hopefully, Ed Milliband will now add his own voice to such a necessary defence.

We are demanding an immediate amnesty for ALL of London Met’s international students so that they can continue their studies at London Met and not be farmed out across the UK or forcibly deported.

We support Jeremy Corbyn’s Early Day Motion (EDM437) that argues for the reversal of this appalling decision. Please get your MP to sign up!

We are saying loud and clear:

YES TO EDUCATION – NO TO DEPORTATION – AMNESTY NOW!

But this isn’t just about London Met. This is an attack on all our international students across all universities.

International students bring in billions of pounds to our economy, they help sustain our universities, and as I’ve already said they add much welcome diversity and multicultural perspective.

This attack on London Met has sent shockwaves throughout the world. It has effectively put a banner across the UK that says ‘YOU ARE NOT WELCOME HERE!’ – and it needs to be reversed!

But why are international students included in net migration targets in the first place?

I’ll tell you why. International students are being used as a political punch-bag as the Tories pander to a racist ‘tough on immigration’ agenda in a desperate attempt to divide us in order to weakem our ability to resist their attacks upon us.

Our REAL ENEMIES are the Tories and their privatising friends!

And a brief word to our own management at London Met. We will work with you to defend our students and save our university. But don’t you even dare consider taking us down a privatisation, outsourcing, or shared-service route as a proposed ‘solution’ to the financial pressure the university is now under or further cutting jobs! It’s no solution and you will be vigorously resisted!

UCU are therefore supporting lunchtime protests outside all universities and colleges throughout the UK this Friday in solidarity with London Met international students – please do everything you can to join us.

Stand with our sisters and brothers as they face the threat of deportation.

SAVE OUR STUDENTS – SAVE LONDON MET!