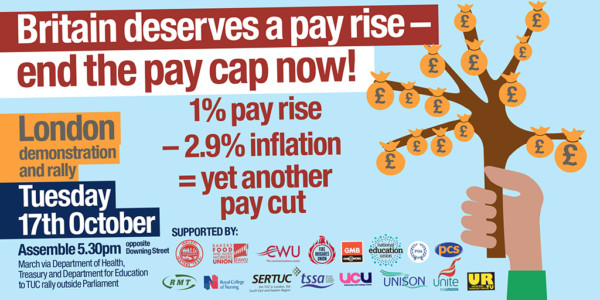 Act now to make them listen: Vote in the UCU e-consultation on pay.

The UCU met with our employer’s yesterday for national pay talks to hear the AoC response to our pay claim submitted in May.

Rather than help to restore our pay, our employers backed the pay freeze and once again have offered us a pay cut.

The offer of 1% is in fact worse than last year.  Once the rising cost of inflation is taken into account. The CPI is currently at 2.9% with RPI at 3.9%.  Our pay is falling behind even faster this year! The offer of 1% is just £5 per week.

The UCU submitted a headline pay claim of 3% plus inflation.

Our claim was designed to restore pay and close the gap between the Principals pay and their staff.

Since 2009 the average lecturer has seen their pay cut by around 21% or £8000. A principal would have lost, in the same period, £32,000. An extraordinary amount considering it is the equivalent to many lecturers annual salary and for some it is a lot less.

The Government is losing the argument on pay and austerity. They are making one concession after another such as the pay award to police, fire service and prison officers. In fact this morning the government have signalled they will end the 1% pay gap for all workers.

This makes the AoC offer even more ridiculous and out of touch.

Vote in the e-consultation on pay.

It is even more important to make sure your voice is heard:

Pay in the news:

TES, Colleges must step out of the shadows for fair pay