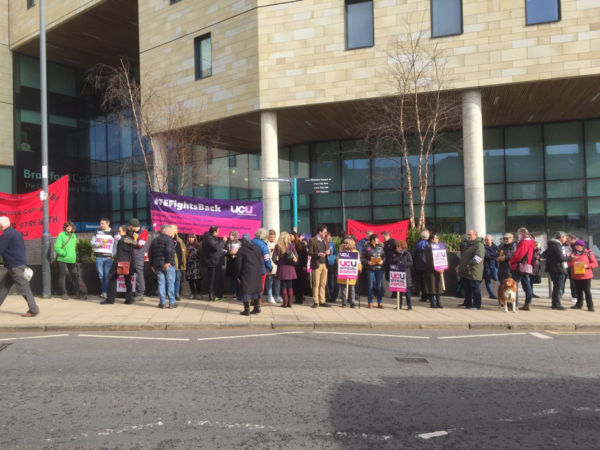 We have also won an improved observation policy and we are creating a climate in which the executive of Bradford College now know that they need to address the appallingly low morale of staff. The college executive has tried to suggest that the wins UCU members have achieved are a result of their good will; this is very far from the case.

Q: How have UCU members achieved this in the context of a financially ‘mismanaged’ college?

A:  Through demonstrating unity and a willingness to take strike action.

We took a total of 10 days strike action during 2018/19 academic year and we announced 16 further days of escalating strike action to hit the 2019 autumn term.

Despite the Tory anti trade union laws, the branch organised successful campaigns to get the vote out twice over this past year. The first occasion was last autumn when as part of #FEFightsback campaign we became one of the super 6 FE branches (and the largest branch) to beat the ballot threshold.

We took 7 days of strike action over pay between November and March.

At mass branch meetings, UCU members unanimously voted to ballot on both: fighting redundancies and to continue pursuing the fight for fair pay despite opposition from the regional official.

The ballots in June 2019 secured 60% turnout with 93% in favour of industrial action to fight compulsory redundancies and 61% turnout with 86% in favour of continuing the fight for fair pay and the 6 month time limit on ballots would cover the autumn term.

During the strike days we had picket lines with 50 plus picketers. On one occasion, the executive had to close the college!  We received messages, donations and visits supporting us from other UCU branches both locally, nationally and from individuals with national positions including the VP Nita Sanghera to name just one.  We received support from Leeds TUC and from the local community. We had support from local MPs and councillors, two of whom spoke on the picket lines and signed our petition calling on the executive to cut their salaries to the average college salary. All of this helped achieve these wins.

The negotiations over the redundancies were backed-up by the strikes and mass support from all quarters and despite the threat of 132 FTE job losses, we halted compulsory redundancies; a fantastic achievement for the branch and a testament to the work the branch officers and reps put in to support members.

Over the 18/19 pay claim, it was only after taking the first 7 days of strike action and 3 more being threatened that we finally started having talks with HR over pay. With the realities of college finances, in mind we asked for 5 days holiday back on the academic contract. When this was put to members many felt that, given the financially bankrupt situation of the college, this was going to be the best we could get. But 5 days extra holidays on their own would not be enough for all our members in particular for people on term-time only (TTO) contracts or people on hourly paid contracts (HPL) who had also taken strike action.

Fractionalisation had been part of the 16/17 pay claim and the only part of that claim that had not been addressed.

By the end of the year we had finally had some slightly more positive conversations with positive noises but nothing tangible had been offered so we had to take the 3 further strike days over pay and jobs in July.

When members came back from summer leave, a message came from the College Exec with news of the extra holidays but it was be piloted and HPLs and TTO people couldn’t be included. This was unacceptable and members were clear that the deal could not be done unless 1) the holidays were formally put in the contract and 2) there had to be improvements for HPLs and TTOs.

So the branch announced our planned 16 days of escalating strike action if we didn’t see results. On 11th September UCU negotiators had a 5.5 hour meeting with exec to discuss an outstanding member at risk of compulsory redundancy, the 5 day holiday pilot and to initiate time-bound negotiations on the part time hourly paid contract and usage.

By the end of this meeting we had agreements on all three issues, including an uplift of the holiday pay percentage for TTO & HPLs. With all this in principle agreed, we knocked off the first three September strike days but kept the October dates live.

With the pressure of the looming autumn strikes, we gained 5 days extra holidays for all staff and an anti-casualisation agreement which stipulates those working at the college for two years have the right to be offered a fractional contract based on the hours they have been working. The implementation date is from 1st November with over a 100 members standing to benefit from more secure employment at the college.

Holidays do not pay the bills.  While the above are significant victories, UCU members at Bradford College are now in their 11th year without a significant pay rise. But the government has finally announced extra funding in FE. Bradford College could be in line to receive £883,019 in 20/21.

Our 18/29 win needs to be celebrated but also built on to ensure funding will finally go towards fair pay rises for our underpaid, undervalued and overworked members.