Get the Vote Out: Unite the sectors, reverse the pay decline – and make the pre-92 employers pay for USS 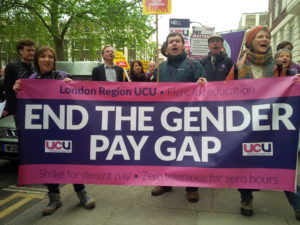 USS dispute, our union now has an opportunity to unite the HE sector over pay. If activists get behind this fight in the way that we did around USS in Pre-92 we can build the union and show that we are a force to be reckoned with across both parts of the sector.

It may be old fashioned for some, but activists should be clear: our strikes are part of a class struggle over the future of Higher Education, and our members – and non-members around us, who joined to participate in it – recognise this basic fact. A recent survey of branches involved in the USS dispute found that those with the strongest left leadership that took the firmest position against retreat, were also the branches whose membership grew the most – in some cases by over 50% in three months.

A proper national pay fight would be unfinished business for the new young and older members, from PhD students to young administrators, researchers and teaching fellows, who joined UCU in their tens of thousands during the USS dispute. Close to the breadline and a long way from their pension, they staffed our picket lines from Day 1. A pay fight would also address the gender pay gap and the bitterness created by horrendous workloads which were highlighted in the USS strikes. Now is the time to take up their fight – over pay, casualisation, inequality and workload – and show that UCU is the union they deserve.

In Pre-92, with the USS pension debate closeted in the JEP over the summer, starting a pay campaign might appear a diversion. It is the opposite. If we take this opportunity seriously, a strong Get the Vote Out campaign over pay can do two things. It will make clear we expect the employers to pay any increased contributions to USS (rising to 3.7% by April 2020, i.e. a pay cut). It will be a dress rehearsal for Round 2 of USS campaign in the Autumn term should the JEP fail to move the position of the USS ‘deficit’.

In post-92 it can halt the crisis emerging over jobs and workloads arising from the market for student fees. There is a jobs massacre concentrated in Post-92 (London Met, Man Met, Westminster…) but also spreading to Pre-92 (Manchester, Liverpool…). Brexit looms over the market madness that sees superb Post-92 courses unfilled and lecturers sacked, while students flock to the Pre-92 down the road. This market madness means any grace is temporary, and no job is safe. The need for a pay fight that can unite the sector on our terms cannot be understated.

We must stand together, staff and students, to defend Higher Education as a public good, with staff paid properly, and pensions that won’t mean poverty in retirement.

Get the Vote Out, Starting Now

We need a ‘GTVO’ campaign in every branch to start as soon as possible. Start with a GTVO organising meeting for reps and members who want to get involved. Go through the arguments with members and plan a strategy. Ask members to focus on reminding colleagues in their own department. Ask members to inform the branch when they vote and keep an accurate list of who is still to vote. The main reason members don’t vote is simply because they forget to vote. So keep reminding them with regular communications. If they have lost their ballot paper they can ask for another one.

Get posters up everywhere across the college, and draft targeted messages to members – at least one a week reminding members to vote. Some teaching staff will get ballot papers sent to their department address, and may not pick them up until before the start of term. But they can vote earlier, if they ask for a replacement ballot paper sent to their home address.

Organise a branch meeting at the end of September at the start of the Autumn term, to prepare a Stage 2 mass campaign. Organise meetings in departments and buildings ensuring that members in off-site institutes are able to attend.

The vote closes on 19 October, which means paper ballots should be in the post by 16 October to be safe.