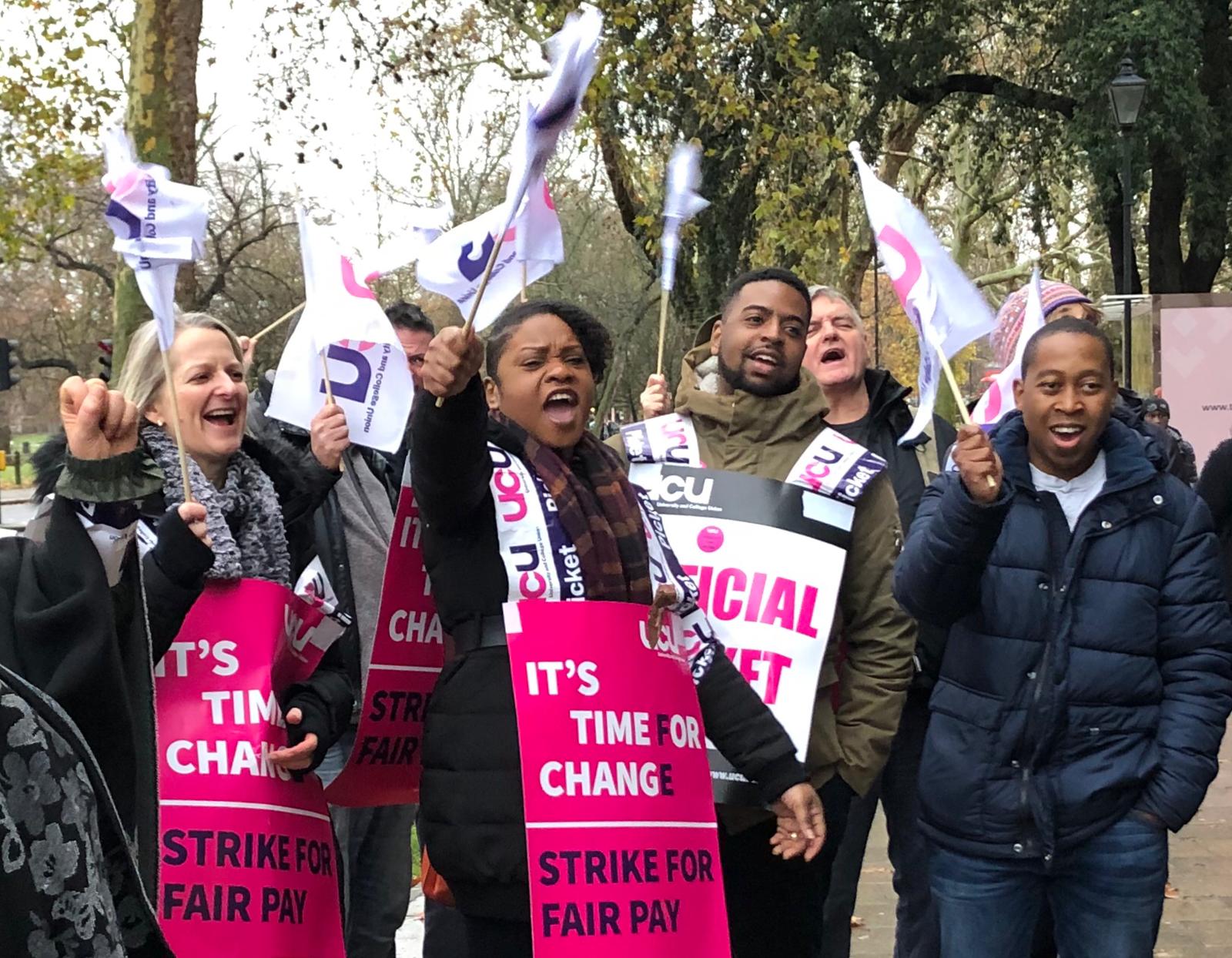 Download the UCU left leaflet for strikes on Wednesday and Thursday.

UCU members at six English colleges will strike for fair pay on Wednesday 28 and Thursday 29 November this week.
The action is timed to coincide with the re-opening of a wider ballot of 26 colleges who aim to join the action in the new year. Last year’s FE strikes in a limited number of colleges demonstrated that concerted Get The Vote Out campaigning could push through the anti-union thresholds and win concessions.

Strike action at the three London colleges that make up the Capital City College Group (CCCG) led to a significant victory winning the 5% pay award UCU is claiming for all colleges and fractionalisation rights for casual workers. The new CEO of the Group has also waived his right to a bonus. This deal shows that money can be found. Colleges have not only overpaid their senior managers  while letting staff pay stagnate, but have wasted huge sums of money on new buildings and failed initiatives which should and could have gone to pay staff a decent salary to combat the rising costs of living. The CCCG deal should be rolled out to all colleges.

If even the employers are starting to grasp the idea that it is no longer credible to run a college on low paid teaching and support staff while giving big pay awards to the senior management team (SMT), it is definitely time for us to step up the fight.

Members in FE are sick of watching management ignore the need to recruit and retain staff on decent pay rates and exploit existing workers by ramping up contact hours, pointless data collection tasks and using the threat of redundancy to intimidate.
The value of our pay has fallen by 24% in the last decade, yet SMT have not faced the same level of decline and, in some cases, record pay awards have been made to them in newly merged institutions.
Consistent government underfunding has caused the rot, but a bad situation has been made worse by the ways in which some Colleges have set about chasing the latest fad in funding streams, rewarding the higher paid and closing courses for short term expediency rather than looking to growth.
We want our FE colleges to be effective and progressive. The landmark deal at CCCG shows that the pay fight is at the heart of any action to transform our colleges.   Solidarity for the six on strike this week can help build the fighback and get the vote out in your college or university too. The same managerialism that has laid waste to much of FE is now infecting higher education. The fight for pay is the key to turning this back.
Send messages of support and solidarity to: