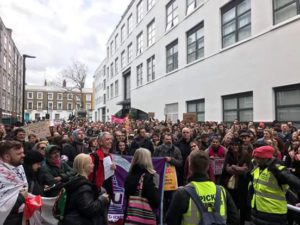 The deadline is 12 noon on 6 September.  All delegates from pre-92 branches to Congress and the June special HE sector conference are entitled to vote.

*Look for the email from Kay Metcalfe through ‘surveygizmo’with the subject line “Ballot: USS National Dispute Committee”. If you attended Congress, are from a pre-92 university and have not received your ballot please let Kay know by emailing her directly (kmetcalfe@ucu.org.uk).

What is the USS National DIspute Committee?

During the USS strikes, UCU called ‘branch delegate meetings’. But members who attended could not vote and the status of these meetings was extremely opaque. Real decisions were made by the HEC. This led to a serious crisis of accountability for UCU.

The aim of the original USS Strike (now ‘Dispute’) Committee motion was simply to put branch delegate meetings on a constitutional footing, as a type of Special HE Sector Conference (HESC). This would mean that they could take binding decisions. However, the Right on the HEC voted to interpret the motion, one that stipulated that the Dispute Committee would be made up of all members of HESC, as one that would be made up of a small subset of elected members of HESC!

This is not an election process that the supporters of the motion (UCL, Goldsmiths and Sheffield among others) sought. The structure of the Committee in future could be revised by a motion heard at the next HESC.

But this ballot is important nonetheless.

Please circulate this email to your Congress and HESC branch delegates.