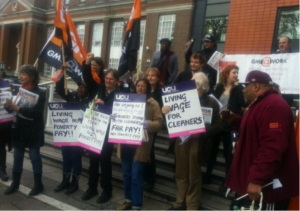 On Friday 8 November cleaners at the College of Haringey, Enfield and North East London (CONEL) in Tottenham led a noisy protest against plans by cleaning contractor Ocean to cut their contracts from 51 to 39 weeks in the year from January 2014. The cleaners are on minimum wage and this amounts to a 23% pay cut!

The protest was organised by the cleaners and their union GMB with the support of the UCU lecturers union. This was the first time many of the women had ever been on a demonstration of any kind, but they were emboldened by the experience and committed to continuing the fight.

GMB rep Steve Sweeney said: ‘This is supposed to be a community college and yet it is utterly shameful that the lowest paid in the college are having their terms, conditions and pay cut even further. CONEL will say it is up to Ocean and Ocean will say it is down to the cuts by CONEL – when it comes to financial savings it is always the lowest paid that suffer the brunt of it.’

Jenny Sutton, chair of UCU at CONEL, said ‘Cleaners are an essential part of our college community, and even though management may not value them enough to pay them a living wage, teaching staff regard all support staff as valued colleagues and friends. We are facing pay cuts too: whilst the richest 1% have taken 90% of the increase in national wealth in the past 5 years, the real value of lecturers’ pay has been cut by 15% since 2009, and lecturers in FE are currently balloting for strike action over pay. As workers, we are all in it together and will stand and fight together.’

The unions say CONEL could save money by cutting the six-figure wages of some of its senior management and stop hiring consultants who charge hundreds of pounds per day for their time. 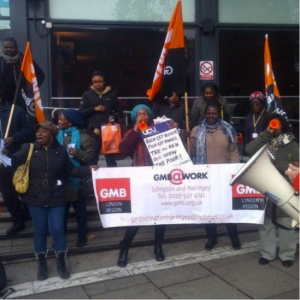 The protest comes in the same week that Mayor of London Boris Johnson raised the London Living Wage to £8.80 per hour, with Haringey Council announcing yesterday that none of its staff, contractors, agency or temporary workers would be paid less than this, and has called on all of its suppliers to commit to it as

well. Council leader Claire Kober said: ‘Paying a fair wage isn’t just the right thing to do – it also puts more money into pockets that will be spent in our local economy, boosting trade and helping businesses. Our position on paying the London Living Wage is clear and we’ll continue to press for workers across London to earn enough for a decent quality of life.’

Haringey Trades Council were also present at the protest. Haringey TUC secretary Keith Flett said: ‘We don’t often agree with the Mayor of London but on this one Boris is right. Every worker in the capital should be paid the London Living Wage. The attempt to cut wages of cleaners at CONEL even further is a disgrace and against trends in the industry too.’