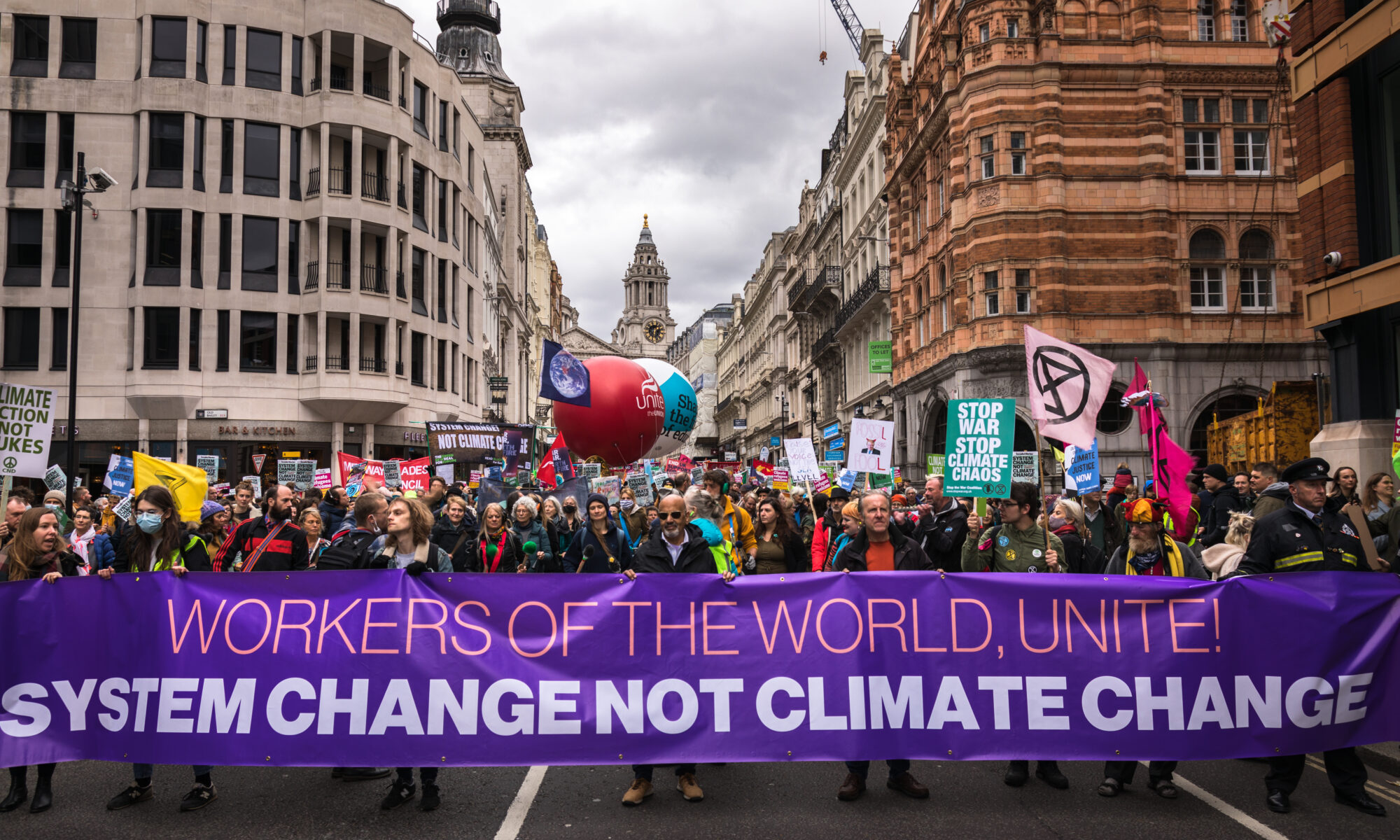 Despite all the pomp and ceremony and the promise of responding to the most significant climate and ecological crisis facing humankind, COP26, hosted by Johnson’s UK government, failed miserably.

The People’s Summit taking place at the same time, organised by the COP26 Coalition, a coalition of campaign groups, NGOs, trade unions and faith groups, put the official conference to shame in terms of climate justice.

The UN COP26 talks failed to deliver what is needed. Fossil fuels have been targeted for the first time as drivers of global warming, but eliminating the use of coal was replaced at the last minute by phasing down coal use. Oil and gas, the other two key fossil fuels, were not mentioned at all. The focus is also net zero by 2050 rather than true zero by 2030.  Net zero relies on all kinds of market mechanisms and unproved technologies to offset carbon and allow those most responsible to shift the problem to somewhere and someone else.

Meeting the urgent targets of 2030 to stay below 1.5 degrees warming was not achieved at Glasgow. The text of the final agreement includes the goal of limiting average global warming to below 1.5oC, but contains insufficient measures to do this in practice.  It has been suggested that targets from the Paris conference (many of which have still not been met) would lead to 3oC warming by 2100.  Glasgow has improved this to some extent and marginally reduced the likelihood of 3oC warming, but without guaranteeing reductions below 2oC.  A catastrophic 2.4-2.8oC temperature rise is still the trajectory facing the world.

For many of the most affected people and areas (MAPA), the issue of climate finance is crucial. In 2009 these countries were promised £100 billion a year to support their efforts to tackle a climate crisis for which they were not responsible. This money has never been delivered. In Glasgow some new commitments were made. Many of the countries of the Global North are planning to significantly increase and, in several cases, double their financial commitments.  However, total amounts are still less than the trillions required by the Global South.

The concept of climate justice is a crucial part of real solutions to the climate crisis. It arises from a recognition that it is the richest countries in the Global North that are largely responsible for the global climate crisis, but the countries of the Global South that will be most devastated by flooding, food shortages, poverty and the need to become or accept refugees.  There will also be disproportionate impacts on disabled people and women everywhere.

The agreements made at COP26 fail to deliver on climate justice and are a betrayal of those whose voices should have been heard most loudly. COP26 has been criticised by the COP26 Coalition as the more exclusionary ever with a predominance of white delegates from richer countries.  Campaigners have criticised the ‘hostile attitude’ of the UK Home office, the failure to meet promises to provide vaccinations to all delegates, Covid restrictions and visa problems disproportionately affecting delegates from Global South countries on the ‘red list’, and the lack of sufficient accommodation set aside for the event.  Some of the accommodation gap was filled by a homestay network (also criticised as it charged booking fees). Local activists set up an occupation to provide accommodation to visiting delegates and activists.  The COP26 venue was not fully wheelchair accessible and delegates unable to wait in queues for an hour or more were refused reasonable adjustment alternatives.  Excluding many of those most in need of climate justice is not the way to achieve it.

The real climate leadership in Glasgow was on the streets – building a movement for change.

There was a wide range of protests both in Glasgow and around the world on the Global Day of Action on November 6th.  Glasgow saw probably its largest demo ever of more than 100,000.  It was organised into blocs covering different themes. The trade union bloc was large with a strong presence of UCU banners and flags.

Demonstrations took place in towns and cities around the UK with many seeing their biggest climate demonstrations ever. Successful trade union blocs were organised on many of these demos. In London over 600 trade unionists from a wide range of unions including UCU joined a lively bloc. This involvement of trade unions is important and something we urgently need to build on.

During the two weeks in Glasgow, other protests and vigils included a Fridays For Future Student Climate Strike on Friday 5th November, interfaith vigils and an Extinction Rebellion ‘greenwash march’. A march on the Home Office location where asylum seekers are forced to sign on expressed support of migrants.  A climate and militarism rally highlighted the exclusion of military emissions in targets, despite the military being one of the biggest polluters.  Both UCU and UCU Scotland Congresses passed motions in support of action at COP26 and members participated in various marches and rallies.

The mobilisations show the potential to build a movement that can demand and deliver the huge transformation we need to avoid catastrophic climate change and to deliver a liveable planet for ordinary people around the world. UCU has an important role to play in this alongside and in solidarity with others in a movement demanding action now.

The failure and betrayal of COP26 makes this task more urgent than ever.

For more detailed analysis of COP26 outcomes click here What happened at COP26? And what next?