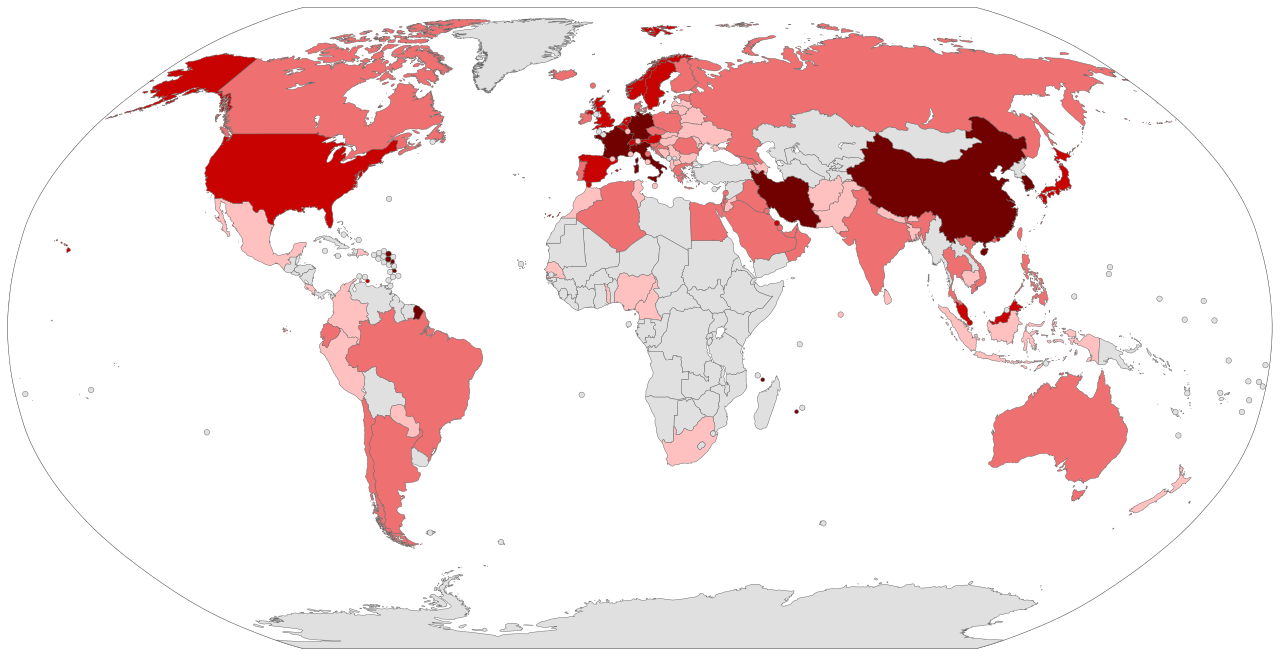 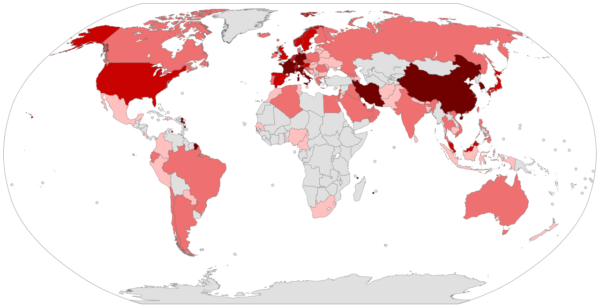 The outbreak of the Coronavirus COVID-19, has created panic across the globe.  The Italian government has just placed 16 million people under quarantine. Schools, universities, gyms, museums and nightclubs have been closed across the whole country. In total across the globe 100,686 people had been confirmed as having been infected as of Friday evening. Of those, 3,411 have died.

Global markets continue to fall as the virus spreads across the world. It appears the UK government is on the verge of making an announcement that could include the shutting of schools, colleges and universities before the Easter break. Department of health and social care figures showed 163 confirmed COVID-19 cases in the UK, an increase of 47 from the day before.

Clearly it is serious and we need to ensure we do all we can to stem the spread of the virus through our own personal hygiene habits. But the real barrier to stopping the spread is the government, the pharmaceutical companies and the marketised system that has caused the virus and allowed it to spread. It is they who we will need to fight if we are going to ensure that working people, once again, are not made to pay the price of a dysfunctional system that puts profit before peoples’ lives.

The 1980s saw over half a million people die in the US alone from the HIV virus.  The Reagan and Thatcher government not only dragged their feet over the issue they propagated a vile homophobic campaign. This was taken up by the press dubbing AIDS as the ‘Gay plague’. This campaign of hate culminated in the implementation of Clause 28.

Governments opposed safe sex campaigns, an important response to prevent the spread of AIDs. Instead they preferred moralising about abstinence. It took campaigners like Larry Kramer to set up organisations such as ACT-UP, eventually changing government policy. The campaign eventually succeeded, but hundreds of thousands of gay men died needlessly before changes were brought about.

The racist Johnson will not miss an opportunity to use COVID-19 as an excuse to whip up even more hysteria over migrants and toughen immigration laws to stop people coming into ‘our’ country spreading disease, spurred on by the Sun and Daily Mail. The appalling rise of attacks on Chinese and South East Asian people since the spread of the Coronavirus is growing. We need to ensure that we show solidarity with these communities by demonstrating our support for them every time an attack takes place.

We should not allow the government to use COVID-19 to close down public protest. In Madrid tens of thousands marched to celebrate International Women’s Day despite growing fears about the spread of the virus.

Owen Jones points out that:

‘More than 3,000 people have succumbed to coronavirus yet, according to the World Health Organization, air pollution alone – just one aspect of our central planetary crisis – kills seven million people every year.’

and argues that government should show the same urgency in dealing with climate change as they do dealing with the spread of COVID-19.

Disease and death are endemic to a failing system

The outbreak of the COVID-19 has shaken the establishment. They recognise that their system simply does not have the infrastructure to deal with such an outbreak. Of course, they don’t and won’t draw the necessary conclusion from this – to reverse all the cuts to the NHS and the welfare state they have made in the last decade.

Writing in the The Guardian Polly Toynbee rightly argues:

‘…there is no way of keeping politics out of this. If this epidemic is only half as bad as the official worst-case scenario, the pressure on every aspect of public services will be tested to breaking point. The full effect of a decade of austerity is about to be brutally exposed.’

In fact it is not just the last decade in which the system has been at fault, but the way that Capitalism as an economic system based on exploitation to maximise profit, is not able to keep safe the population and the planet that we inhabit.

In the 19th century, the birth of Britain as the ‘workshop of the world’ brought with it disease and death. As millions of people moved from the countryside to the cities mass slums were created. Water-borne diseases like cholera killed thousands of working men, women and children. Frederick Engels describes powerfully in The Conditions of the English Working Class what life for working people was like living in Manchester and working in the ‘dark satanic mills’.

The outbreak of Covid-19 began in China, a country which has experienced the fastest and biggest levels of industrialisation ever seen in history, much of this in order to provide cheap manufactured products to the West and to enable it to compete with the US. What took Britain a hundred years to do in the 19th century China has managed in 35 with the same consequences for working people.

After the First World War, brought about by competing imperial rivalries, the biggest ever flu epidemic in history occurred. As Europe emerged from the rubble of that war, disease spread rapidly through the European populations and is estimated to have killed between 20 and 50 million people.

The spread of deadly viruses and the development of an economic system that brings wars, climate change and the deregulation of production has gone hand in hand.

The pharmaceutical companies and agribusiness

A central part of the inability of our society to deal with these crises is the deregulation of the pharmaceutical and food industries. There appears to be progress being made towards creating a vaccine for the virus. But why is it so difficult to find a cure for viruses that kills so many people?

Pharmaceuticals are a multi-billion-dollar business. This means that there is little or no collaboration between the multinationals, each wanting to be the first to find a cure so that they can make a fortune. It is accepted by most now that the anti-viral drugs that have allowed AIDS sufferers not to die could have been found many years before, saving millions of lives, if there had been a sharing of research.

‘Unless there’s a big market it’s not worth the while of a mega-company … There was no business case to make an Ebola vaccine for the people who needed it most.’

Buranyi carries on to argue that:

‘Even if research begins during a pandemic, the unpredictable nature of outbreaks means work is often shelved if the crisis dies down, and so progress halts until the next time a similar infection flares up.’

In short there is no planning by the pharmaceutical companies. Their only response is to gamble on the best place to direct resources to create new vaccines that will bring the biggest profit.

A lot has been made about the origins of COVID-19 being from a market in the Wuhan province of China. Its racist overtones are difficult to miss. That it was the behaviour of the ‘uncivilised’ people of the region, selling and eating wild animals that allowed the virus to jump from animals to humans.

Whilst it is true most viruses are spread from animals to humans, hence the names we give them (eg bird flu and swine flu), it isn’t because of ‘barbaric’ people eating wild and exotic animals. It is the unregulated agribusiness that has made the spread of disease more prolific. The industrialisation of pig, cattle and chicken farms on a scale never seen before in history has allowed new strains of flu to develop and combine which morph into killer diseases.

We will need to fight for our protection

Whilst we wash our hands more frequently, and for at least for 20 seconds or the time it takes to sing Happy Birthday twice (!), we will need, once again, to campaign for government to put in real measures that protect working people from the diseases their system has created.

This must start with ensuring if workers are laid off that those on casualised contracts are being paid sick pay from day one. No doubt the employers in the HE sector will try and use COVID-19 as an excuse not to address our demands and will threaten great reprisals if we don’t end our dispute and accept any derisory offer they make.  It would be insulting to everyone working in the sector if the employers look to us to increase workload or face job loses to mitigate the impact of the COVID-19 rather meet our demands.

It is the employers’ marketised model with its reliance on charging huge fees to overseas students and zero hours contracts that have created a crisis in the sector. Why would more of the same help to deal with COVID-19?

We must also be alert to any attempt by government to use the virus to bring in laws that make it easier for them to divide the working class. But above all we must put pressure on government to regulate the pharmaceutical companies and the agribusiness and demand that they reverse the austerity-driven cuts in the NHS and the welfare state.

3 Replies to “Coronavirus, capitalism and class”