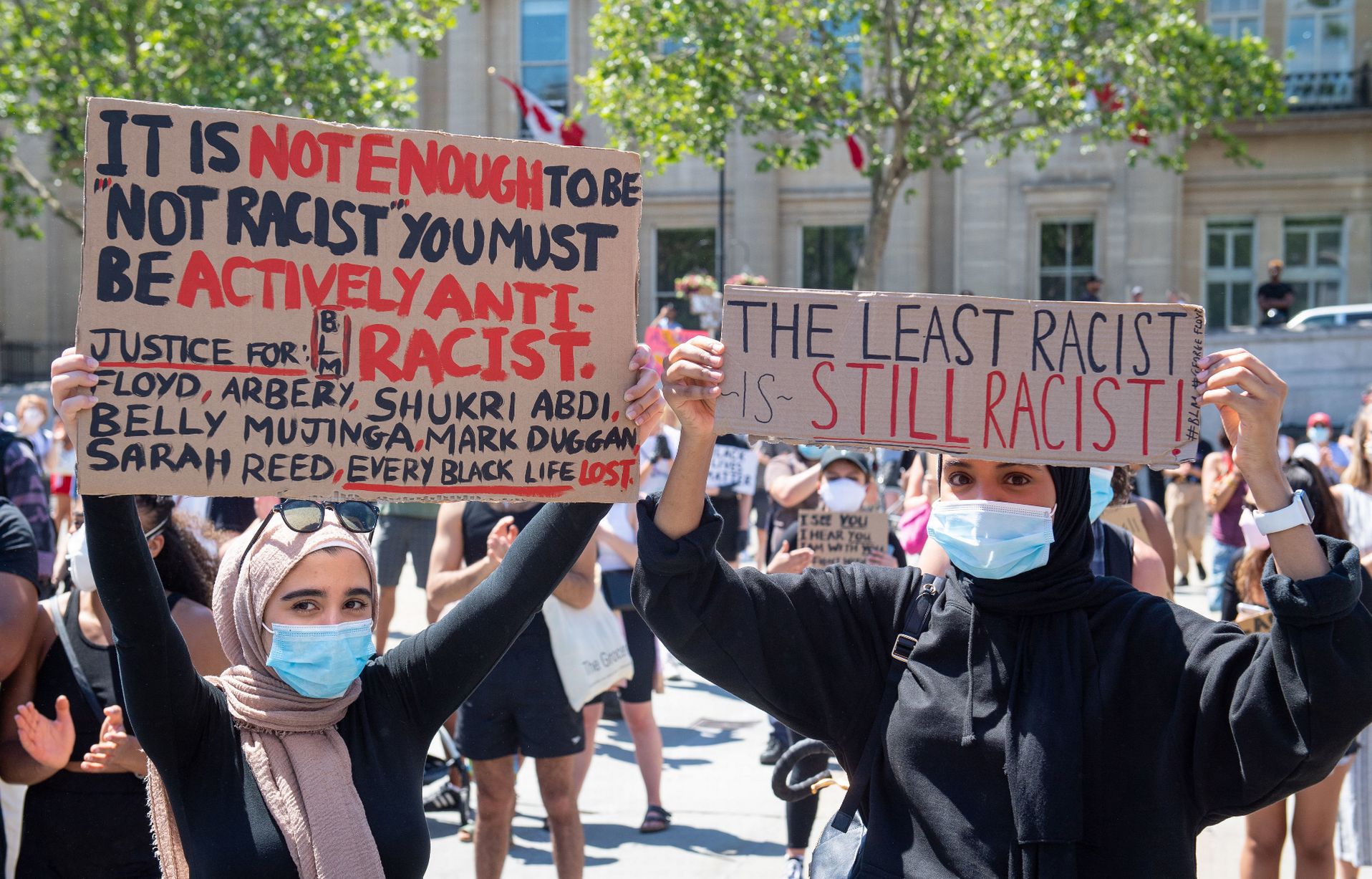 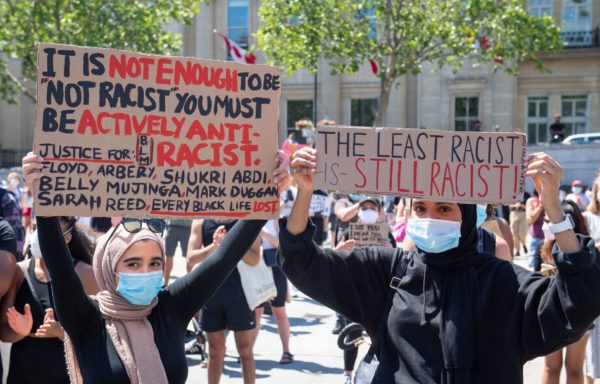 What is taking place across the United States of America is a rebellion. The murder of George Floyd has triggered an outpouring of rage and anger – as one black protester shouted at the police, ‘400 hundred years’. The shocking scene of George Floyd pleading for his life clearly repeating that he could not breathe, as a white policeman deliberately knelt on his neck, exposes the racist core of US society.

The rebellion has spread across the US to the door step of the White House. Trump’s response was to threaten the protesters that they would be, ‘greeted with the most vicious dogs, and most ominous weapons, I have ever seen. That’s when people would have been really badly hurt, at least.’

As the liberal press denounce the revolt as needless violence against property and looting, #BlackLivesmatter activists respond to such pleas in powerful and convincing ways. If you have not seen this speech by a young #Blacklivesmatter activist please do.

Whilst this is taking place Elon Musk launches a rocket into space costing billions of dollars. Read the brilliant poem by Gill Scott Heron, ‘Whitey on the moon’, written in 1970 This definitely an example of ‘first time tragedy, second time farce’.

What is also significant about these protests is that white people are on the demonstrations too. There is a great picture on Twitter of women from the Kentucky National Organisation of women attempting to protect the black protestors by standing between them and the police.

The resistance to racism is a central aspect driving the rebellion and it is not just in the US.  In France migrants and their supporters took to the streets in their thousands demanding that migrants are given the right to remain, for the closure of detention centres and better access to housing.

In Britain anti-racism is also driving the resistance to the government’s attempts to force workers back into unsafe workplaces. Covid 19 is having a disproportionate impact on people from BAME communities. Black people are four times more likely as white people to die a Covid-19-related death. Even when factors such as age, self-reported health, disability and other socio-demographic characteristics were taken into account, Black people were still twice as likely to die from Covid 19. Bangladeshi and Pakistani men and women were more than 1.8 times likely to die than their white counterparts. Diane Abbott MP has launched a campaign calling for an independent enquiry.

The NEU has now put teachers from BAME backgrounds on the list of vulnerable categories, which means any negotiations about returning to work must meet this criterion.

The petition calling for Cummings sacking has now reached one million. The disbelief that the key advisor to the PM could so blatantly break the rules of the lockdown is only matched by people’s disbelief that he is still in his position.

The Cummings debacle has acted as a lightning rod for all the pent-up frustration and fury over the government’s negligent handling of the coronavirus public health crisis and the clear class bias that informs their thinking.

Cummings’s attempt to justify his actions in the Rose Garden interview poured more fuel on to the outrage felt by millions. His utter contempt for all of us who did obey the lockdown rules and didn’t see our loved ones, even when they lay dying in care homes.

Cummings is hailed as being the mastermind who has his finger on the pulse of the public mood. It was always a lot of rubbish. Cummings just used old fashioned racism and xenophobia to win elections.

Neither he, nor most of the press (including and especially the liberal press), understood what lay behind the mood for Brexit and Johnson’s landslide victory. For some working people the hatred of the establishment, that had failed working class communities for so long, and the belief that Johnson would be different, won votes.

Johnson’s incompetent handling of the crisis is ensuring that that belief is being eroded by the day.

No return to unsafe workplaces

But parents, teachers and the public in general simply don’t believe the government that it is safe to begin the return to work. This is hardly surprising when you consider the facts.

The death rate, whilst falling, was yesterday still at 245 for a single day and Sage, the government’s scientific advisory committee, has had four of its members break ranks and warn against a 1st June return to work out of fear of creating a second wave of infection.

The NEU’s national political campaign has been excellent. It has put the government on the back foot. They have shown that unions can continue to use their collective power despite being in lockdown. They have held dozens of webinars across a range of issues and involved their members. The last one had 20,000 NEU members in attendance. Seventeen thousand teachers and education workers have joined the NEU in two weeks.

UCU: we need a national response

Unfortunately, the UCU’s response has not matched this in scale or ambition. We pride ourselves in UCU as being a union that punches above its weight. We have always been prepared to lead from the front. On pensions, pay and conditions we have struck, lobbied, helped initiate coordinated mass strikes in defence of our members’ pensions and pay and led the way in organising solidarity action with school climate strikes.

But we have seriously lagged behind when it has come to leading a national campaign against the government failures on coronavirus. This is crucial not just in this enormously important public health crisis, but also for the other battles we face.

When I or others make these criticisms, we get the same old sectarian red-baiting rants from the right in our union that we are criticising the work of the full-time officials. Let’s make it clear from the start, we are not. Whilst at the beginning the advice was far too cautious and officers who were prepared to lead unofficial protests to shut down colleges were disowned, the work they have done since in creating tools kits and advice on how branches can deal with the crisis are great.

But this cannot be a substitute for a national campaign. The attempt to bury the Four Fights dispute shows tactical naivety. When we are faced with mounting restructures, redundancies and possible closures of colleges and universities this is not the time to retreat.

Branch officers have had to campaign to get the most basic democratic forums to take place, such as ensuring that the NEC/FEC/HECs meet, during this crisis. Even after this was achieved, there were attempts to stifle discussion and the refusal to discuss motions on the flimsiest of bureaucratic reasons. UCU have only organised two FE and two HE national meetings and three other briefings. They were fine but they didn’t happen until 6 weeks into the lockdown. It has taken officers at a regional level to take the initiative to get branch officers’ meetings up and running.

When eventually the NEC did meet, discussed and passed a motion calling for a national campaign, still nothing has happened.

This must stop. Lives depend on it.

For universities and colleges, the threat to go back to work before it is safe to do so seems to be a less urgent one than that in schools, although new government guidelines clearing the way for more face-to-face teaching for some year 10 and 12 students by 15th June will raise real fears amongst members. But September is looming. Whilst we have some good guidance on this, we won’t be able to fight it on a college by college basis. We will need national protests.

This must start by calling a series of online national protests. We need UCU to produce resources to build the days of action. The first could be on casualisation and the next on racism and the protection of BAME members. Click here to see what Sean Wallis and I attempted to discuss at NEC as a strategy for how the union would conduct a national campaign (it was ruled out of order).

The employers are not playing by Queensbury rules, they never do. They are using the crisis to push through wholesale sackings and restructures that they have wanted to do for a long time. Thousands of university staff on fixed term contracts are currently losing their jobs. They are leaving it to the very last moment before we break up for summer to announce these restructures making it even more difficult to challenge.

They don’t play fair neither should we. If we really can’t find a firm that can run a ballot then we are faced with no other choice but to organise to take action without one, to protect lives and livelihoods.

It is easy to believe that in lockdown our collective power has been diminished. It hasn’t. The NEU campaign has shown not only can we organise under lockdown we can do so effectively. The government has been rattled by the resistance that the NEU have put up. The disarray they are in is because of the resistance that millions of people across Britain have shown. We might not be able to see it on our TV screens (as if we have ever been able to!) but it is going on. Through social media, petitions, zoom meetings protests lobbying as well as unofficial action.

From the streets of Minnesota to the boulevards of Paris people are saying enough is enough. In Britain the battle that is being waged to force people back into unsafe workplaces will determine how many lives are saved in the here and now and what the future will hold for working people. We need leadership that can rise to this challenge.

2 Replies to “Coronavirus: Rebellion and change – no return to unsafe workplaces”