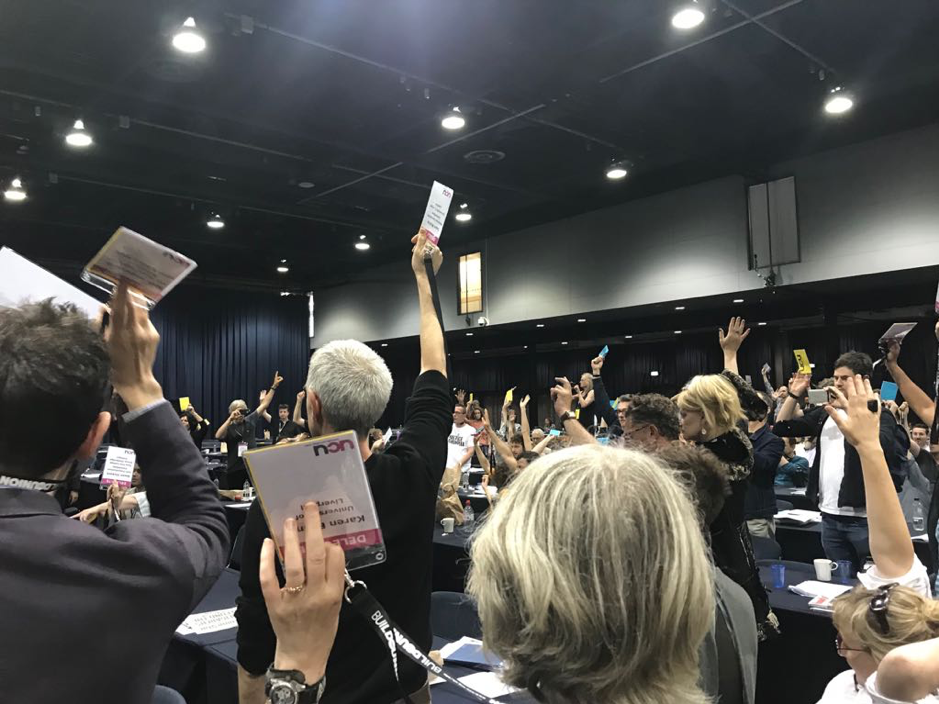 Here we go again! Once again, the General Secretary is doing everything she can to undo the decisions taken at the recent HE Sector Conference on next steps in the Four Fights and USS disputes.

She has today sent out a document inviting branches to express their opinion on the timing of ballots and action in those disputes – issues that were settled definitively by delegates to Sector Conference, the sovereign decision-making body of the union.

This behaviour has been a consistent feature of these disputes. This time last year, HEC refused to implement Sector Conference decisions designed to allow a ballot to take place in time for industrial action early in autumn term 2021. As a result, our first strikes didn’t take place until December, when the term was nearly over. The campaign was plagued by further prevarication, as well as the imposition of timetable of action which required some branches to strike out of term time or during reading weeks. This litany of failings culminated the calling of a marking boycott so late that many branches were unable to implement it.

This democratic deficit became an issue for the recent UCU Congress. A motion (L1) criticising the General Secretary for failing to ensure decisions were implemented was carried, and a censure motion only narrowly fell.

But it appears that the General Secretary is undeterred. Despite successive Sector Conferences in April and June deciding not to endorse her position that we should halt the Four Fights and USS disputes and only resume them after a period of reflection and preparation, she is now trying to achieve this outcome through the mechanism of a Branch Delegate Meeting.

The position established by the Sector Conference is straightforward and clear. Conference supported a motion (HE6 amended by HE6A.2) calling for simultaneous aggregated ballots in both disputes over the summer, closing in time to allow strike action in induction weeks this autumn. Conference also passed a motion (HE7) calling for a ballot during the autumn term to allow for action in the spring. These motions were ruled as not in conflict, and many delegates voted for both on the basis that an autumn reballot might be needed.

This motion (HE6/HE6A.2) builds on previous motions at the Special HE Sector Conferences calling for a summer ballot. Motion 13 at the Four Fights conference on 20 April, and Motion 12 at the USS Conference a week later, both called for a reballot “on HEC to schedule a ballot of members for all-out industrial action in the USS and Four Fights disputes, in order that action should commence from the beginning of the academic year 2022/2023”.  The General Secretary can hardly be surprised at the third vote in as many conferences in favour of a summer 2022 ballot!

Rather than implement the summer ballot, the General Secretary has adopted tactics designed to call these decisions into question and make them unworkable. A meeting of HE officers to authorise the ballot has still not taken place despite new officers being in place for two weeks. The possibility of legal challenges and the need to redraft the terms of the disputes have been used to justify delay. Now the GS is attempting to shape the outcome of Monday’s Branch Delegate Meeting to create enough leeway for next Friday’s Higher Education Committee Meeting to overturn Conference decisions.

The General Secretary is determined to get her own way whatever the cost to democracy. Question 5 for the BDM refers to the union’s 30% membership density and asks branches to support the strategy she proposed in her email of 13th April which has already been rejected by three Sector Conferences. The GS clearly believes we can’t win UK-wide disputes until some future moment when we have achieved greater density or a ‘super-majority’.

But you don’t build a union by putting off the fight until sometime in the future. Our experience is simple: when we fight, we grow. That’s how a stronger union with a greater density of membership is achieved.

Today, inflation reached a new 40-year height. The strikes by railworkers have put trade union power back on the agenda for the first time in years and are seriously challenging Boris Johnson. Teachers’ unions (NEU and NASUWT) are preparing to join postal workers (CWU) in balloting their members as part of a growing movement of workers against the cost of living crisis.

This is no time for UCU to decide to ‘pause and reflect’. Our wages are being slashed, our pensions have been trashed, and job insecurity, inequality and unhealthy workloads remain endemic. On top of that, a growing number of UCU branches are finding themselves under attack from draconian employers imposing wholesale course closures and sackings.

UCU branches should refuse to accept the undemocratic basis of the questions sent out for Monday’s BDM. We should avoid providing any excuse for HEC to overturn Conference decisions and we should demand that the General Secretary abides by motion L1 and ensures that those decisions are implemented – now!

Model motion: Democracy in the HE disputes

Persistent failure by the General Secretary to ensure that democratic decisions in the HE disputes are respected and implemented in a timely way.

The latest of these is a failure to promptly implement a summer ballot as called for by June Sector Conference.

That motion L1 from Brighton was passed by Congress 2022.

That the questions for Monday’s BDM are an attempt to overturn Conference decisions and are therefore democratically illegitimate.

Not to engage in the ‘consultation’ on the terms set out by UCU HQ.

To mandate its delegates to the BDM to call for the implementation of Conference decisions, in particular HEC6 as amended by HE6A.1.