Report back for UCU branches and regions

The Defend Further and Adult Education Conference: Shaping the future was a great success. We would like to thank everyone for attending. Around 100 people attended from across the country.  It brought together many of the different constituent parts that make up the Further and Adult Education sector. Practitioners from ESOL, ACE, 16-19 as well those who teach HE in FE debated and discussed alternatives to the Government’s market-led narrow vocationalism.  The conference sets it aim to build upon the campaigning work that has been done so far to promote and defend the sector.

Before the opening session, delegates were shown a 15-minute campaigning documentary video about Further and Adult Education made by Gerard Don-Daniel, from City and Islington College. The video had interviews with Jeremy Corbyn, the Leader of the Labour Party and the legendary Johnny Marr, ex Smith’s guitarist, defending the sector and condemning the government’s agenda.

This will be put online very soon and we encourage all UCU branches to organise a screening of the video, followed by discussion afterwards.

The opening session was led by Kevin Courtney, Deputy General Secretary of the NUT, who made a passionate speech about the importance of the sector and the damage the government’s area reviews will do to it if they are allowed to get away with the rationalisation agenda that lies behind the reviews. To great applause he informed us that that Sixth Form Teachers will be taking national strike action on the 15th March.  From the platform Sean Vernell, newly elected NEC member for London Region, pledged UCU’s support and that members would join NUT members on their picket lines.

In the workshops delegates participated in serious discussions ranging from Vocational vs academic; the false divide, ESOL: Language for life to Prevent; the demonising of a community and English and Numeracy; contextualising learning the key to understanding.  The powerpoint presentations from these workshops will be put online on the London Region website.

There will also be an e- publication (with hard copies made available) produced by UCU of the presentations and discussions that came out of the workshops. 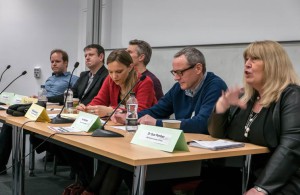 A key area of discussion was the post 16 area-reviews, and funding cuts.  All the panelists agreed that the area reviews were not only an effort to rationalise and cut the sector further, but also the reviews look to set the sector up for devolution of the adult budget to local commissioners. The panel had grave concerns that a devolved adult skills budget will result in provision which is chaotic, patchy, inconsistent, and makes national skills planning impossible, and privatisation very much more likely.

Another discussion point was ESOL and Adult Basic Education.  The panel shared their annoyance at the Government’s duplicitous treatment of ESOL and particularly Muslim women.  One point they did stress, however, was that in the next week, colleges will receive their adult skills funding, and that for the first time can make local decisions about how to demarcate this funding.

Michael Wilshaw was roundly condemned for his views that 16-19 year olds should be educated at school, rather than college.  Andrew Harden from UCU called for his immediate resignation for making such comments.

The conference finished with Gordon Marsden, Shadow Minister for Lifelong Learning speaking passionately in defence of FE and Adult Education. He particularly highlighted the role of HE in FE and how it had transformed so many people’s lives. His parliamentary team will now be looking to organise a meeting in the Commons in order to continue the promotion and defence of the sector.