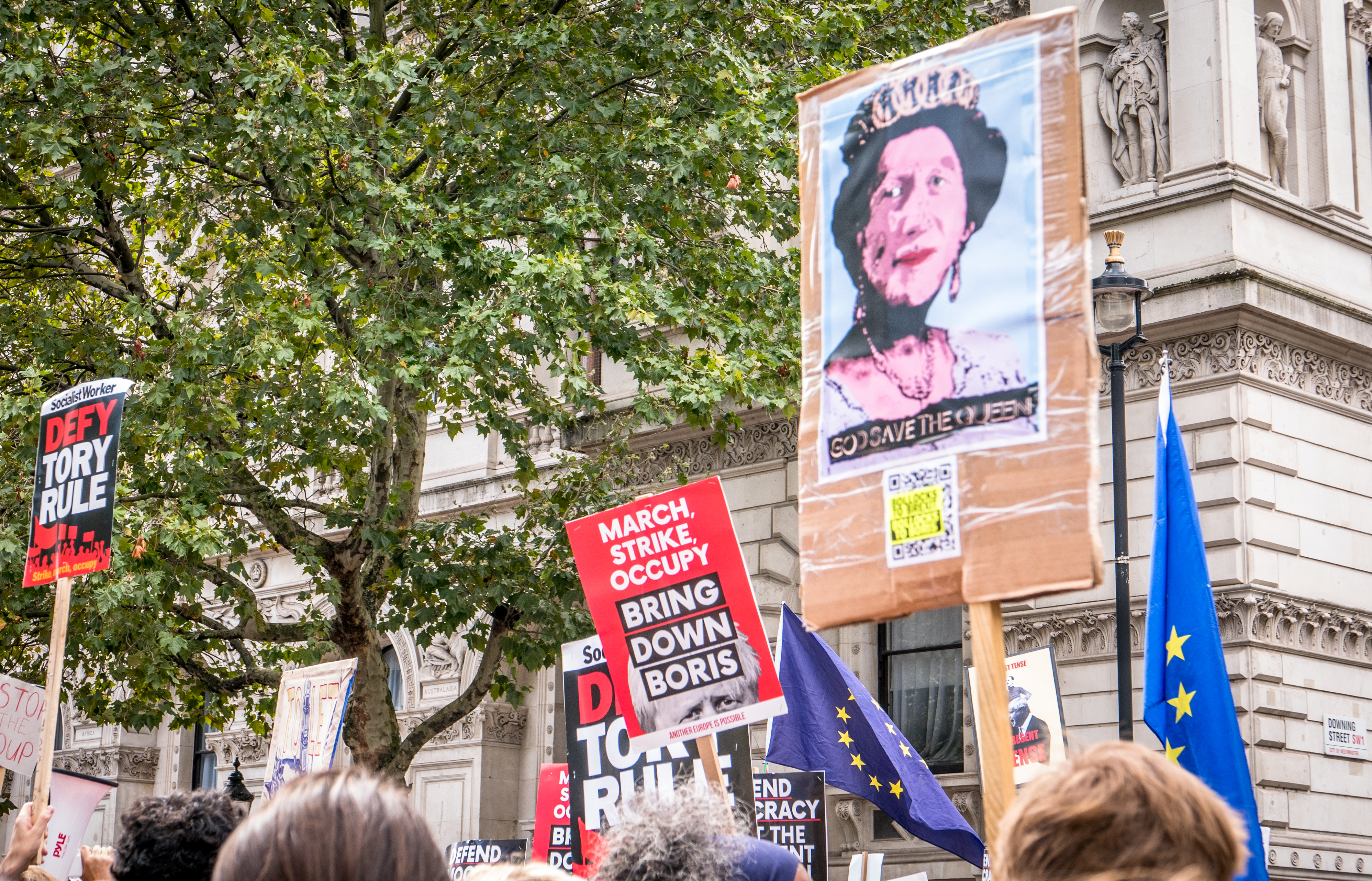 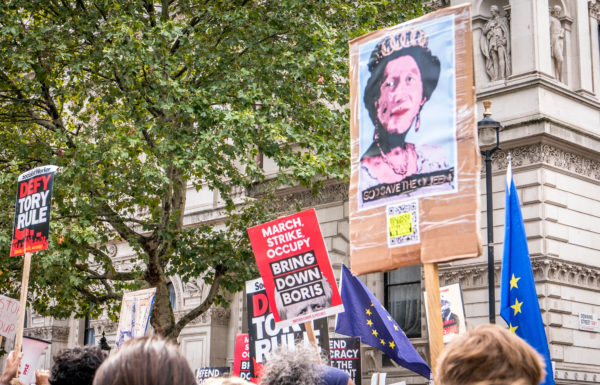 Boris Johnson has declared war on working people in Britain. His suspension of Parliament, in order to avoid parliamentary scrutiny of his planned no-deal Brexit by the 31stOctober, has led to tens of thousands of people across Britain taking to the streets in outrage to stop Johnson by-passing the democratic process.

Johnson’s offensive comes not from a position of strength. He is isolated not only from the majority of the electorate but also from those who someone like him could normally count on for support – the employers. John Rees in a well-argued piece in the Guardian draws comparisons with Charles 1st arguing:

“And this is where deeper and more meaningful parallels begin. The government of Boris Johnson is indeed a court clique, unsecured from its natural moorings in the wider political establishment.”

However,while it may appear that Johnson has made a colossal political error, it is possible that Johnson can survive this political crisis and even come out of it strengthened. How we campaign against Johnson bypassing parliamentary democracy, and under what slogans we choose to fight, is critical. It will determine whether the movement is able to put Johnson in the dustbin of history and Jeremy Corbyn into Downing Street or whether it allows Johnson to masquerade as the champion of the dispossessed against the so called metropolitan political elite.

Johnson’s parliamentary manoeuvre is a class attack.  It is an attempt to impose a neo-liberal, pro-market, pro-privatisation and pro-Trump Brexit – in short, an anti-working-class Brexit. Working class people who voted for Brexit did not vote for this. Corbyn has rightly argued that the main divide in Britain is not between leave and remain but between the haves and have-nots – those who have lost their jobs, homes and lives due to Tory austerity policies and those who have become even more fabulously wealthy on the back of working class immiseration.

The movement to defend democracy must unite people who voted leave and remain and mustn’t simply be under the banner of those who want to remain. Failure to do this will allow Johnson to portray himself as the man of the people, the person upholding the democratic outcome of the referendum.He will go to the country in the forthcoming general election under the banner of ‘the people or parliament’ and, if the movement has nothing to say to those working-class people who voted leave, Boris could become their champion.

The biggest affront to democracy in this country isn’t Johnson’s proroguing of parliament; it is the failure to call a general election after becoming Tory Party leader. Less than 100,000 Tory party members – mainly white, middle class and men – have imposed a Prime Minister on Britain who is now carrying out policies for which he clearly does not have a mandate.

The movement for democracy must have at its heart the call to remove Boris’s unelected Tory government and to call a general election now.

Uniting the have-nots against the haves.

There is too much pessimism amongst some of the Left in Britain. Too many have written off leave voters as racists who can’t possibly be won to vote for a Labour Party with radical, progressive, Socialist policies. It is the failure of many on the Left to understand the motivation of millions of working-class people who voted leave which prevents them from uniting the whole of the class against the Tories. The referendum vote to leave was a rage against the system – a system that has brought over a decade of poverty, despair and austerity. Even where this rage was expressed in anti-immigrant bile, the fuel that ignited this xenophobia was poverty.

Of course, poverty does not have to lead to some working people blaming immigrants for these problems. More fundamentally, it is the lack of resistance that leads people to look for scape-goats.

Failure to offer hope through uniting the working class in successful action against austerity is the key reason why the likes of Johnson, Farage and Trump can appear to offer working people hope. The more passive people are, the more isolated they feel and therefore the more difficult it becomes to get rid of the ‘muck of ages’, as in Marx described it, that divides people.

UCU is doing its bit to try and build the resistance. On Friday Tower Hamlets College UCU took its 6thday of strike action kicking off the third year of our campaign over pay and conditions. In HE, UCU members are about to be balloted in defence of their pensions and pay. UCU members across both sectors are gearing up to take solidarity action in support of the school students on 20thSeptember demanding climate justice. We will be taking a motion to the TUC calling on the congress to support a 30-minute workday stoppage in solidarity with the school students. There will also be a Stand up to Racism tour around the colleges and universities to stop the growth of far-right ideas and organisations.

But he did win the leadership of the Labour Party – not once, but twice – and got very close to beating Theresa May in the last election.  This is an incredible feat when you consider not only that he has been the most vilified political leader in modern political history but also because a significant number of his own MPs would prefer to keep Johnson in office rather than see Jeremy in number 10.

He succeeded because he did not come across as part of the political establishment. If he is to be able to win then he must continue to convince people that he has not changed.

Those in and around the leadership of the Labour Party have clearly made stupid tactical errors that have played into the hands of Johnson and Corbyn’s enemies across the parliamentary political spectrum.  Agreeing not to put a motion of no confidence, because the likes of Jo Swinson would not support Jeremy as leader of an interim government, and instead agreeing to back motions to thwart a no-deal Brexit was a huge error. It not only gave Johnson the green light to go on the offensive, it also confused and disorientated Corbyn’s supporters. Trying to play their parliamentary games only serves to further isolate Corbyn from those working-class communities which need a voice that speaks for them.

The stakes have dramatically risen in the last few days. There are two very clear outcomes. Either, through a mass movement organised along the lines described above, we are successful in stopping Johnson’s frontal assault on our class by ousting him and putting Corbyn into Downing St. Or Johnson is able to pose as the voice of the dispossessed, bolstering his support, to carry through a new offensive against the whole of the working class – both remainers and leavers.

To ensure that the former, and not the latter, is the outcome means the movement to stop Johnson must unite the whole of the working-class whatever way they voted in the referendum and not just one section of it. At the centre of this movement must be the call to stop Johnson, his attack on parliamentary democracy and his Tory policies, call a general election now and demand freedom of movement for all. If we are successful in achieving this and Corbyn puts forward policies which unite the have-nots against the haves at the centre of an election campaign to put Corbyn’s Labour Party into office, then we can succeed.

One Reply to “Don’t let Johnson become the champion of the dispossessed: Leave and Remain Unite”