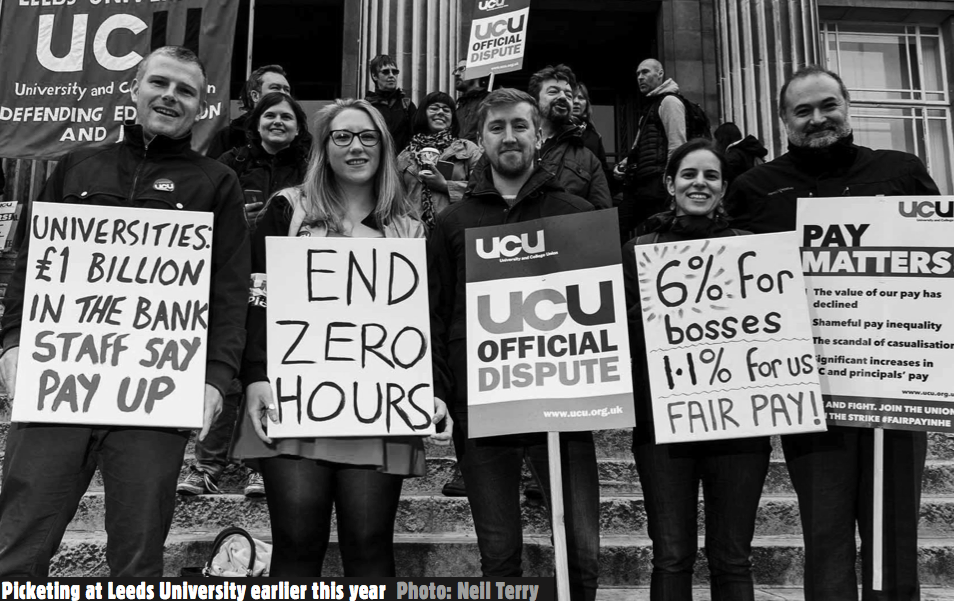 After a lengthy debate on Friday, the Higher Education Committee (HEC) of UCU voted, by a slim majority of 16:13 to halt our national campaign over pay and equality, in order to undertake a consultative ballot of members over the offer.

This decision of the HEC, justified as to ‘pause and consult’, was opposed by the left on the HEC. A vote for the union to recommend rejection of the offer and to continue the campaign was also lost by the same margin.

It is now urgent that activists seek to convince members to reject the pay offer and re-start the pay campaign. This means calling branch meetings to discuss the situation and for members to collectively decide to call for rejection.

We have taken action to close the gender pay gap, demanding action to reduce casualization and address headline pay erosion.

We took strike action before the summer, resigned from external examining duties in large numbers, and have undertaken a work to contract since.

Our campaign had achieved a slight increase in the headline pay offer from 1.0% to 1.1% and proposals for talks on gender and casualization.

Members can be proud that we have put equality at the heart or our campaign and forced our employers politically on the defensive.

This is why at Essex and LSE the employers have made proposals to begin to address the gender pay gap. But the national offer includes no real movement. No one has suggested this is a fair settlement: inflation for student fees is 2.8%. Why is inflation for pay at 1.1%?

The decision to halt the pay dispute now makes it much harder to fight for further concessions.

Within weeks, the Trade Union Act will soon require all trade union industrial action ballots to get 50% of eligible members to participate.

Since the formation of UCU, no national ballot has ever reached this figure, although local ballots over cuts and job losses regularly do.

We should be under no illusion that ending our pay dispute this year will allow us to resume it next year without a colossal effort by the UCU to get members to vote.

Brexit is fuelling inflation. The HE Bill is causing institutions to direct income to capital projects and speculative expansion. There is less and less money for pay.

The union faces the biggest challenge since its formation. There is now a real danger that we will be forced into local pay bargaining, limited by our own employers’ budgets, that they control.

So why has a majority of the HEC decided to abdicate leadership and halt our national pay campaign?

On paper, UCU has very good policy on addressing inequality in HE, fighting for higher pay, challenging the market in education, and so on.

But the majority of the HEC are pessimistic about members’ willingness to fight. So, when members rightly voice concerns about two-hour strikes – or imposed strike days in June – the right-wing of the union seize on this as evidence that members want to stop.

We believe this is a misreading of the situation, but it is in danger of becoming a self-fulfilling prophecy. Members voted to take strike action and ASOS last May. Since then, we have taken three days of strike action.

The employers have not significantly improved their offer, and many have moved to impose 1.1%.

If the HEC wanted to win they would agree to go around branches and campaign to build the action this term (not necessarily to immediately call more action, but to explain the strategy the union would need to win the dispute, including how branches would need to escalate to strikes in response to threats of pay docking).

In 2005, Sally Hunt led from the front to get branches to boycott exams. Members took action that led to a three-year pay increase. Contrast this with the situation now.

The Right have voted to poll members cold, over the heads of branch reps, with no improved offer, a Yes/No question and the threat of pay docking hanging over members.

UCU does not have a majority in the leadership that is resolute about organising a serious pay campaign to see these policies implemented.

So when reports reach the HEC about anxieties from members, instead of going to members and addressing these concerns and talking through the strategy, the majority panics.

The union has done a lot of work to build this pay campaign. Impressive websites have been created. Emails were sent out, all with excellent material. Thanks to these, members can be in no doubt about the injustice of unequal pay and casualisation.

What has been missing is a systematic campaign to convince members that the union is serious about winning.

Such a discussion has to confront not just the issues we are fighting over, but the strategy we need to win the dispute. A resolution from the left at the last HEC to have a national speaking tour of HEC and officials was never implemented. Instead member engagement is sought through electronic feedback from unscientific questionnaires – or consultative ballots with leading questions. Even recommending rejection in a consultative ballot was a step too far for the majority of the HEC!

The vote for a recommendation to reject the offer was lost by one vote. What kind of leadership have we got that refuses to lead?

We argued at HEC that surveys of members should be accompanied by contextual information, highlighting the more favourable timing of executing this dispute to win a victory now rather than putting off our claims to a future date when the draconian Trade Union Act requirements prevail.

We warned of the demoralising effects of this pattern of UCU leadership initiating action then retreating half way through a campaign.

We stressed the need to make the case to members that we must assert our strength and win this dispute. if we want to gain strength and confidence to fight the many battles ahead (with the HE Bill looming).

There is an alternative. If members vote to reject, UCU will call a strike day this term, and move to a marking boycott next term.

The two are interlinked – if members boycott exams, we can expect threats of 100% or 50% pay docking.

At that point branches will need to threaten escalation to bringing all members out on strike in order to get employers to back off.

Striking this term prepares members for defending colleagues participating in the marking boycott. Plus, we can strike ahead of the national demonstration for education on 19 November.

What You Can Do

1) Regions, branches and committees can all make recommendations to members.

If you can, call an emergency general meeting of members to discuss the situation. Part of that discussion must be to discuss the industrial action strategy outlined above.

2) Don’t wait but campaign for a Reject vote by talking to colleagues. Call meetings in departments. Email colleagues but most of all, try to discuss this face-to-face.

Every vote matters. Even if we don’t win the vote, every vote for action strengthens the union in the eyes of management.

Some members may be thinking about resigning. We have to make the argument that we are in this for the long haul, and that instead of resigning, they should direct their anger to help build a stronger union for the fights to come.

3) We need to strengthen the leadership of our union.

We have to ensure that members’ interests are genuinely reflected in the HEC, and ensure our branches and the leadership of the national union act in the members’ interest to fight for equality and pay.

To do this we need to campaign for a vote in the forthcoming elections for candidates who will do just that.

This is why UCU Left members stand for election – to try to build
a stronger, more democratic union that fights for its members’ interests together.