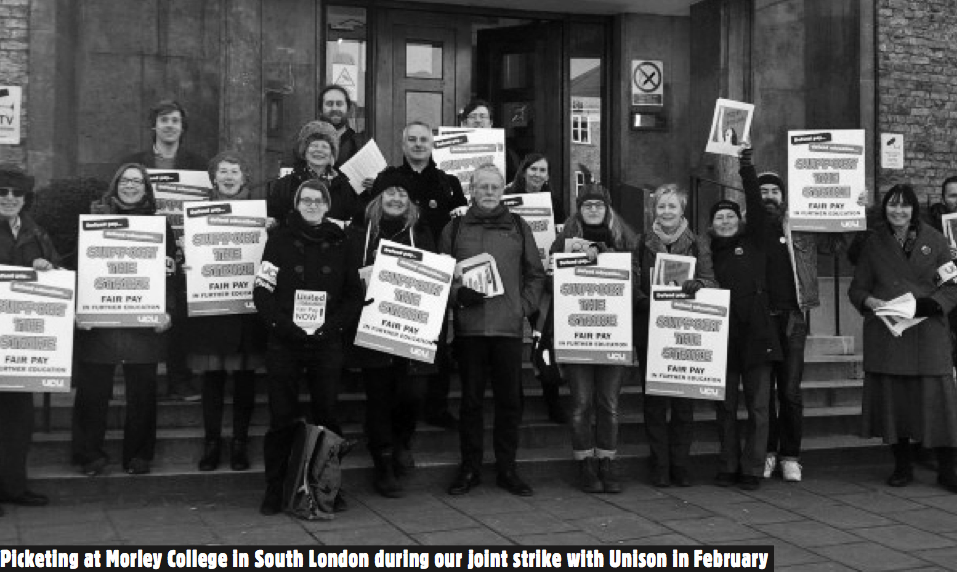 FE members are being consulted electronically on whether to accept or reject this year’s AoC pay offer.

UCU Left recommends to vote reject the AoC deal and implement the conference decision to ballot members in pursuit of the claim.

The negotiators met with the AoC to hear their response to our claim on Wednesday 21 September, outlined below.

While recognising the movement made by the employers, it is not enough.

Our claim for £1 per hour extra for all was not met. The AoC offer of 1% (or £250 a year for those on the bottom of the scale) works out to be less than £1 per day extra. The offer does not go far enough to address the 18% cut in wages over the last five years.

The claim had two other very important elements:

• All colleges to ensure fair pay for women by conducting equal pay audits or reviewing any existing audits; identifying any gender pay gap; and constructing an action plan with the trade unions locally to eliminate any such gaps

• Hourly paid, temporary, fixed- term or casual staff working
in a college for more than two years to be offered a permanent post on a pro-rata basis that is commensurate with the hours they actually work

UCU has reached an agreement with the AoC ensuring that equal pay for women through an action including an agreed tool kit that will be sent out to all college management.

However UCU is not happy with the AoC’s refusal to agree that hourly-paid lecturers working for two years should be offered a permanent post.

and perpetuate encroaching casualisation in our colleges.

Therefore all UCU members are encouraged to vote to reject the deal and implement the sector conference decision to ballot members in pursuit of the claim.