The past twelve months have seen a transformation of the union. Free membership for hourly paid PhD students who teach, mass mobilisations around the USS dispute in HE and similarly in the pay strikes in FE have created a record increase in membership of 24,000, a figure of 16,000 net.

This needs to be understood as a straw in the wind not an end point for the union. The processes leading to these developments have not disappeared and we are potentially only scratching the surface of the discontent in post-16 education that is driving participation and support for industrial action. It is for this reason that we need to fully understand and embrace the changes that have taken place and are yet to emerge in our union.

The open hostility to the marketisation of education is itself a reflection of the wider alienation and hostility to austerity and neo-liberalism. The rise of Corbynism is evidence that the political base of society in the UK has shifted dramatically. Since the 2017 election the May government has failed to establish itself as anything other than a zombie government lurching from crisis to crisis and loosing ministers along the way. In the process the ability to maintain their neo-liberal, intolerant and scapegoating ideology is being undermined. The Windrush debacle is the most recent and arguably the most significant of these. The ‘hostile environment’ for immigration has been exposed as the racist victimisation of minority populations that it is. Attempts to separate off ‘legal’ immigrants from ‘illegal’ immigrants fell flat when it became clear that the Home Office under Rudd, and May before her, systematically developed targets for deportations at any price. Even Boris Johnson was forced to call for an amnesty for all immigrants! Donald Trump’s visit to the UK in July now provides a fantastic opportunity to mobilise that discontent.

When the disputes over USS in pre-92 universities and currently FE pay erupted it should have come as no surprise that the hostility to the Tories would feed into these disputes. The hypocrisy of Vice Chancellors pay rises while pay for the rest has been driven ever lower and casualization has spread deeper and deeper into our education system was exposed. The inequality of the gender, and other, pay gaps also became a clear focal point of anger when employers sought to engineer the destruction of the USS pension scheme.

A decent pension was understood to be crucial not only for those with ‘secure’ employment but crucial for those who put up with so much discrimination and casusalisation in the hope of finally getting their foot on the academic ladder. Now all of those aspirations were to be dashed.

What was a surprise however was the extent to which members and non-members recognised these connections and immediately generalised their discontent. This was not simply a dispute over pensions. The dispute created an army of pension experts campaigning against marketisation and an army of activists willing to fight for change through 14 days of strike action. FE pay strikes now hold the potential for these arguments to spread beyond HE. The strikes again go to the heart of the very same issues effecting HE and have the very same generalising capabilities.

For UCU there is an important lesson that needs to be learnt, and learnt fast. Democracy and transparency in our decision making is crucial for members to feel the union is truly representing and reflecting members’ concerns. It is clearly the case that too many in the old leadership of the union are not simply resistant to calls for greater democracy and accountability but are actively hostile to it.

There is a prize to win if UCU responds to the calls from the activists to make this a genuinely member-led union. Our pay negotiations in HE and FE have already begun and, as expected gone nowhere. Yet Mark Serwotka, General Secretary of PCS, has already called for national pay strikes in the autumn. Pay disputes can address the issues of casualisation and pay discrimination in a direct way in which pensions never could. If we succeed in delivering co-ordinated pay strikes across the public sector we can win the changes members are demanding and more. But to do so means members must be in charge of this union and the transformation we are seeing in UCU must be delivered. 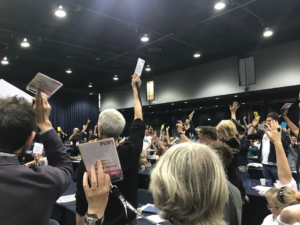