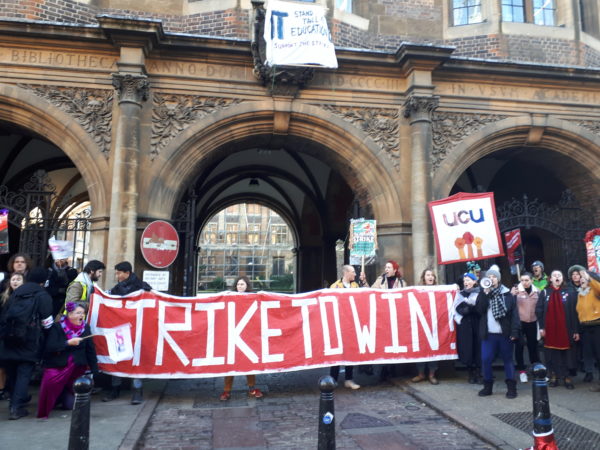 Strike to win – pickets and student supporters in Cambridge, 4 December 2019

The five issues we are fighting on are inextricably linked. We need to escalate to win on all of them.

We are in a fight to defend the future of Higher Education from the effects of marketisation. The Four Fights pay and equality campaign is central to that fight and it’s crucial for all of us that we win it.

Download and get this motion passed in your branch.

The threat to the USS pension is serious. It could mean the death of a pension worth the name in the pre-92 universities. But as round two in the USS fight was brewing, we realised that we could not afford to fight on pensions alone. The Four Fights campaign on pay, equality, casualisation and workload is a necessary compliment to the pension fight, for several crucial reasons.

1.Pensions are nothing other than deferred pay, pay that employers and employees agree to hold back until we need it when our working lives are over. If we don’t halt the ten-year erosion or our pay, any victory on pensions is partial at best.

2. It’s not much use defending the pension scheme if large numbers of our colleagues are effectively excluded from it because they are in insecure employment. Combatting casualisation is essential to ensuring a new generation of entrants to the scheme and guaranteeing its future health.

3. If we’re fighting over what is fair and right, we can’t afford to ignore inequality. Our pensions are better than most, but they don’t look so good from the perspective of women whose careers have stalled through maternity breaks or of BAME colleagues who have been passed over for promotion.

4. Excessive workloads which threaten our health and sometimes our lives are the product of the huge numbers of redundancies seen in the sector over the last few years. We face a Hobson’s choice: you can survive to claim a full pension or you can keep your mental health, not both.

But the final reason that the Four Fights is necessary is the most important of all. It is about unity. Unity is our chief weapon – unity across the sector and unity across our union.

With the help of the anti-union laws, our employers try to divide us from each other and limit our resistance. Round one of the USS fight was a game-changer for our union, but it only involved members in pre-92 institutions. Post-92 members are not allowed to be in dispute over USS, but we are not bystanders. We all know that attacks on TPS pensions will intensify if they succeed in wrecking USS.

Levels of casualisation are mostly lower in the post-92s than in the research-intensive universities, but the cancer of precarious contracts is an issue for all of us. Inequality is a scourge across the whole sector, while workloads are rising to unmanageable levels everywhere. Pay unites us all.

That’s why the decisions taken by Sector Conferences and the HEC to wage the Four Fights simultaneously with the pension fight was correct. The law dictates that they are two separate deputes, but it can’t stop us fighting them together.

We have made an excellent start. Eight days of strikes in 60 institutions represents an impressive demonstration of our intent. Some branches are in one dispute, some in two, but we have refused to separate our fights because to do so would play into the hands of those who want to use marketisation to fragment our sector.

Now the crucial task is to escalate the action. The reballots in 36 more branches are absolutely central to a Second Wave. The employers will be hoping that Labour’s election defeat has sapped our morale and we fail to bring more members into the fight. But we always knew that we would have to escalate whoever was in Downing Street. Where possible we should follow the lead of Cambridge who have twinned with Anglia Ruskin to help them get the vote out. Kent can twin with Canterbury Christ Church, Leeds with Leeds Beckett and Leeds Trinity and so on.

Escalation is also about upping the number of days of action in the Second Wave. December’s Sector Conference voted for 14 days of USS strikes in February and March. The HEC due to take place on January 30th must now endorse that decision and call the same days for the Four Fights dispute.

Now is not the time for hesitation or cold feet. Linking the issues and uniting members in escalating action is the way to win.