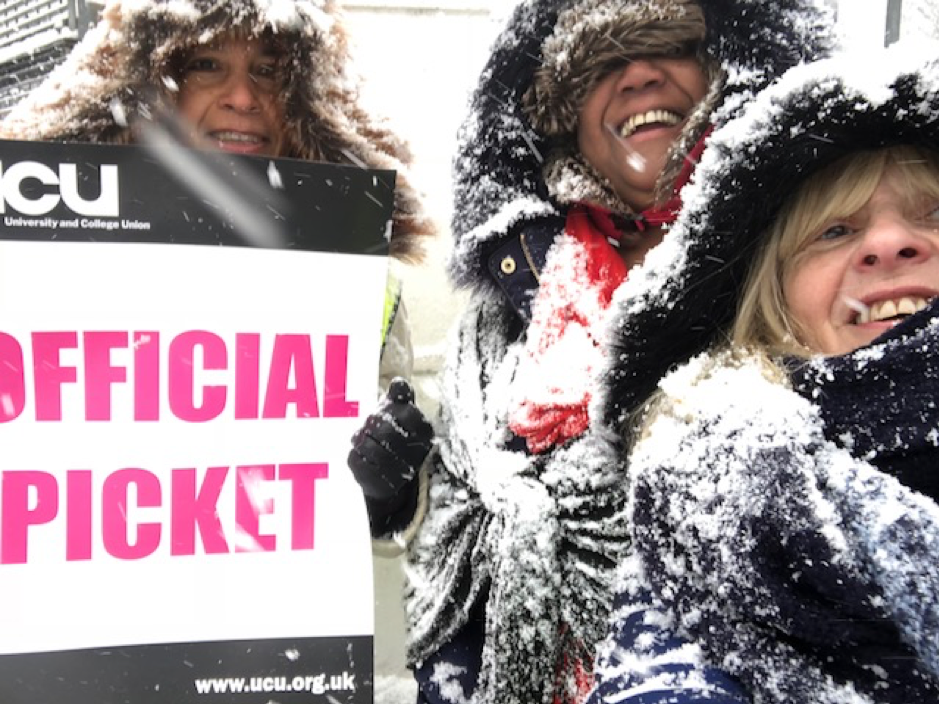 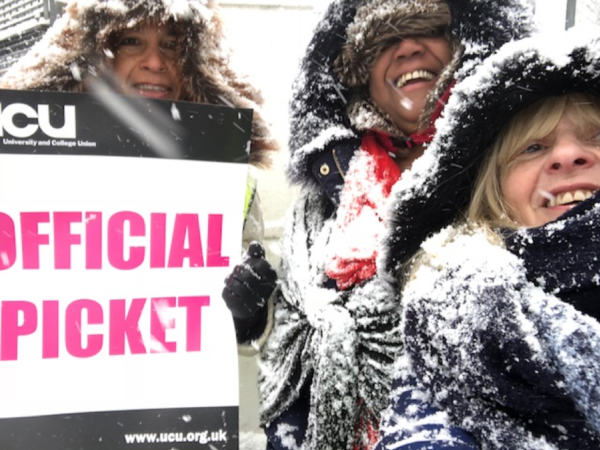 Further Education lecturers and students joined our magnificent battling HE comrades in a march on Parliament last Wednesday.  It was the first day of a two-day action in FE to be followed up by a further three days of strike action before Easter and possibly more days beyond that.  There was a confident, almost celebratory atmosphere on the snowy march which was reflected in the powerful messages of support (for “however long it takes”) from the ‘star-studded’ platform in the packed hall and surrounding streets at Westminster.

A particularly moving speech from UCU and UCL’s Sean Wallis ran with John McDonnell’s stance against the continuing commodification of education in the UK and passionately painted a picture of how we, as lecturers, nurture, support and inspire our learners in FE and in HE to journey to the limits of their current potential and then to look over the edge and set their sights on what lies beyond – for this was a demonstration to defend the very principles of education as we have known it.  This is a struggle not just about pensions and pay and equality for workers on precarious contracts.

I work in an inner-London ‘super-college’ – a merger of three (to date) financially strong colleges, stretching massively from Pimlico through Soho, Camden, Islington, Holloway and Finsbury Park on to Tottenham and Enfield.  The college group has a turnover of over £120M and £30M in cash reserves.  The top four people in the management hierarchy earn £3/4 M between them.  Last year the successful business-people on our Board of Governors set a budget with a surplus of £2.5M and an allocation of £½M for redundancies.  Teaching staff have not had anything more than a paycut (in real terms) for as long as we can remember and many of us with permanent contracts are working alongside hourly-paid colleagues who teach the same number of hours per week, are overloaded with the same admin and ‘other’ duties as the rest of us, have the same qualifications, get equally good observation grades and yet are re-employed year after year after year ….. some for as many as 10 years, 15 years, even 20 years on precarious contracts which reward them with not much more than half the salaries of permanent staff!  Being low-paid throughout your career impacts on your ambitions, your housing, your lifestyle choices and those of your family and your children. My college says it has sympathy with this group of staff but “can’t afford” to fractionalise them. 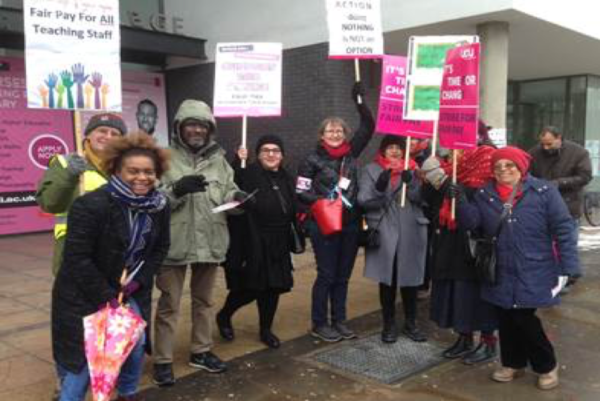 So we stood, last Thursday on the picket line in the bitterly cold winds and snow flurries singing our ‘silly’ “Super-college Fractionalisation – that is why we voted!” song, to the tune of Supercalifragalisticexpialidocious, waving our ‘Because we’re worth it’ banners, laughing and cheering as the bus drivers hooted their horns.  It made us feel better – doing nothing is not an option!  (If you haven’t seen it yet have a look at CLL members’ great rendition of Super-fractionalisation  Click to Download

We have a massive mandate behind us, with a 96% vote for ongoing action on a 63% turnout across 16 colleges in London (and two beyond).  Now we must stay strong and press on.  Our cause is just.  Even the AoC (the Association of Colleges – our employers’ representative organisation) when recommending only a 1% pay rise this year, said that, where affordable, colleges should look to pay more!  We have agreed to call a further three days of strike action (dates to be confirmed).