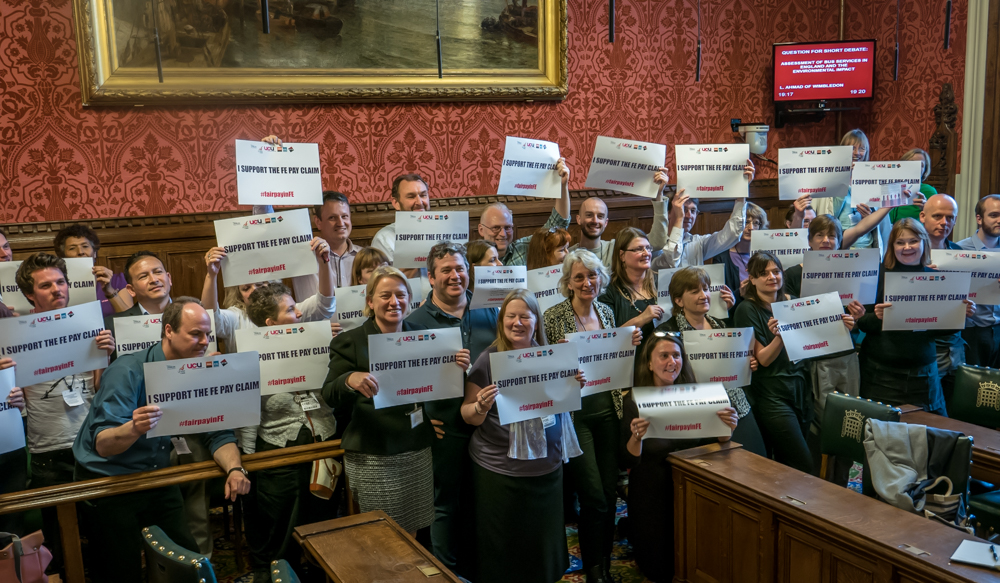 UCU members in FE have voted to accept a 1% pay deal. Some 66% of members voted to accept the offer while 33% voted to reject the deal and move to an industrial action ballot. It is clear from this vote that if the recommendation coming out of the FEC had been to reject the deal and fight for decent pay then that 33% could have been turned into a significant majority to take action.

Unfortunately, that’s not what happened. Instead the FEC voted, by one vote (and against national conference decision), to organise a consultative ballot, and put it out without recommendation. It was clear that the Independent Broad Left members on the FEC believed that we should accept the deal. But they hid behind the phrase ‘the best that can be achieved through negotiation’.

By not offering clear leadership many members will have seen this as a signal that the FEC (majority) was not up for a fight. Without any clear leadership, and the complete lack of any campaign (despite motion after motion calling for one), members reluctantly voted to accept.

The failure to provide leadership over pay is even more scandalous when we take into account that this was the last chance to implement the national conference decision to organise national action before the new ballot thresholds introduced by the Tory Trade Union Bill become law.

The retreat on pay will have a further negative impact. The battle against the gender pay gap and casualisation will be effectively deferred yet again.

These issues have been clear mobilising issues both in the FE and HE pay campaigns. New activists have been won to the union because UCU was seen as seriously prioritising these issues. There is a real danger that the retreat on the pay fight will be seen as an abandonment of the fight against gender pay and casualisation too.

We mustn’t let pay become a non-issue. Our members’ pay has been cut by 18% in real terms over the last five years. Inflation is set to rise in the coming months, hitting our pay packets even harder. Failing to fight on pay is not a realistic option for a trade union in these circumstances.

We will be putting in a new national claim to the employers in the new year as part of the annual pay round.

But with the abandonment by the FEC of national action this year over pay and the unlikelihood of any national action in the near future, we need to find ways to keep the pressure on the employers over this issue. There will be opportunities for branches to organise a campaign and ballot against those colleges who refuse to implement the 1% deal. Branch officers might find it hard, though, to convince members to fight over such a paltry amount.

We need branches, or better still branches acting collectively at regional level, to put in claims for £1 per hour extra for all. This claim can be run alongside other issues such as workload or the demand to fractionalise hourly paid lecturers.

Part of the reason the AoC offered more in response to our claim this year was because of the fear of more local claims being made. Local employers do not want branches turning up every April with wage demands and a threat of action.The AoC has to make itself relevant otherwise there is a real danger that it will cease to exist. Therefore, ironically, the more local pay claims are made the more pressure will be put on the AoC to have meaningful national bargaining.

However, this is not the whole story behind the small move in the right direction made by the AoC this year. Our national strike action and lobbies of parliament might not have made any major breakthrough on pay and conditions but they did have a political impact. The government didn’t make the cuts in funding that many expected. This has given many colleges a slight breathing space and many have held back this year from another round of job losses.

This is why the decision to abandon national action now was such a tragic mistake. We need to continue to campaign for national action to add real weight at the national negotiating table as well as strengthen our branches locally. And we need to make sure that the fight to end the gender pay gap and push back the tide of casualisation is not abandoned.

One Reply to “FE Pay Consultation – We mustn’t let pay become a non-issue.”