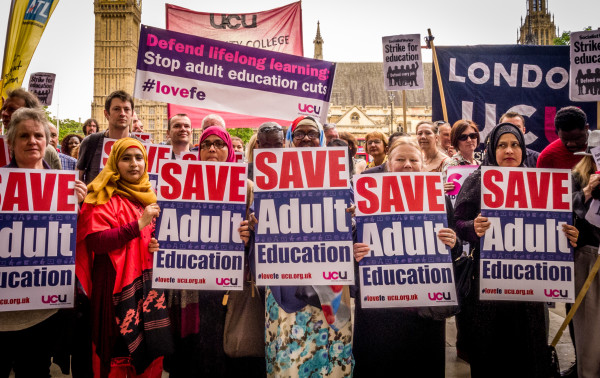 UNISON members in FE have voted by a margin of 2:1 to strike against the imposition of the employers 0 percent pay ‘offer’. UCU have a live ballot and will be joining UNSION for the first time in ten years in a joint national strike across all English colleges on Wednesday February 24th to demand £1 per hour extra for all.

UNISON and UCU members who have seen their pay cut in real terms by 15 percent over the last five years are furious with the employers’ insulting offer. With thousands of job losses over the last few years staff who are left working in the sector are faced with spiralling workloads making their job nearly impossible to carry out effectively. But not everything in the sector is being cut. It is a common joke within the sector that only one thing in FE rises year on year – principals’ pay! Many earn five times that of main grade lecturer and seven times that of support staff.

A reflection of how angry people are about their pay is the fact that in just one day eleven thousand people clicked on to UCU’s new ‘Rate for the Job’ on line tool.

The strike will take place in the context of the biggest government offensive against Further and Adult Education since Incorporation in 1993. Adult Education has been hit with a 40 percent cut resulting in thousands of job losses last year and four hundred thousand student places disappearing. That is on top of the one million student places that have been lost since 2010.

Alongside these cuts the government have launched their Post 16 area reviews for ‘fewer but more resilient colleges’ – a rationalisation programme that some are predicting could see the sector shrink from three hundred colleges to one hundred.

At a time when there are eight hundred thousand 16-24 year olds without work, education or training and 15 percent of 16-65 year olds who have no qualifications whatsoever this is a national scandal.

The NUT are also set to ballot their members working in Sixth Form Centres against the government’s plans to shrink the sector. The next stage in our campaign to defend working class education must be to organise a programme of coordinated strike action uniting all three unions.

Recently we have managed to get more sympathetic media coverage than ever before.

The last year has seen significant mobilisations against these attacks. There have been three parliamentary lobbies involving hundreds of students and staff, a fifteen hundred strong march on city hall as well as numerous days of action and Downing Street protests. One of the successes of the campaign so far has been to ensure more people know about what FE does. For example the fact that over three and half million people attend FE and the sector teaches more 16-18 year olds than any other sector, enrolling on a wide range of vocational and academic courses.

It is widely accepted that the government’s spending review did not cut the sector’s budget quite as deeply as everyone feared because of this campaign.

On the 5th March there is a major conference, Defend Further and Adult Education; shaping the future. This conference will bring together hundreds of practitioners, educationalists and students from across the country to discuss how we can develop an alternative to the government’s narrow educational agenda and to continue to build a movement to defend second chance education. Register now by clicking here  https://www.eventbrite.com/e/defending-further-and-adult-education-shaping-the-future-tickets-20057125402

Locating our fight to defend working class education in the battle against austerity.

Our fight to defend the sector takes place whilst millions of people are suffering the same attacks as we are. As more economic turmoil looks set to hit the global financial markets governments and employers once again are trying to blame immigrants and working people for their incompetence and greed. The introduction by the Tories of a new (anti) Trade Union Bill is their attempt to make it even more difficult for people to mobilise against their attacks on our services. This is why we should see our campaign as part of that wider battle against austerity.

Governments across Europe have increased their racist rhetoric in the past month chillingly reminiscent of the 1930s. Cameron’s threats to deport Muslin women if they refuse to learn English came in the same week as the press revealed that refugees were given wrist bands to identify them as migrants, were housed in homes with red doors and the Danish government passed a law that made it legal to confiscate refugees belongings to pay for their care.

One of the important changes that has taken place within the last six months has been the election of Jeremy Corbyn as leader of the Labour Party. It is a breath of fresh air to see the leader of the Labour party supporting strikes, joining an anti-racist demonstration in Calais and making it clear that the next Labour government, if elected, would restore the EMA. 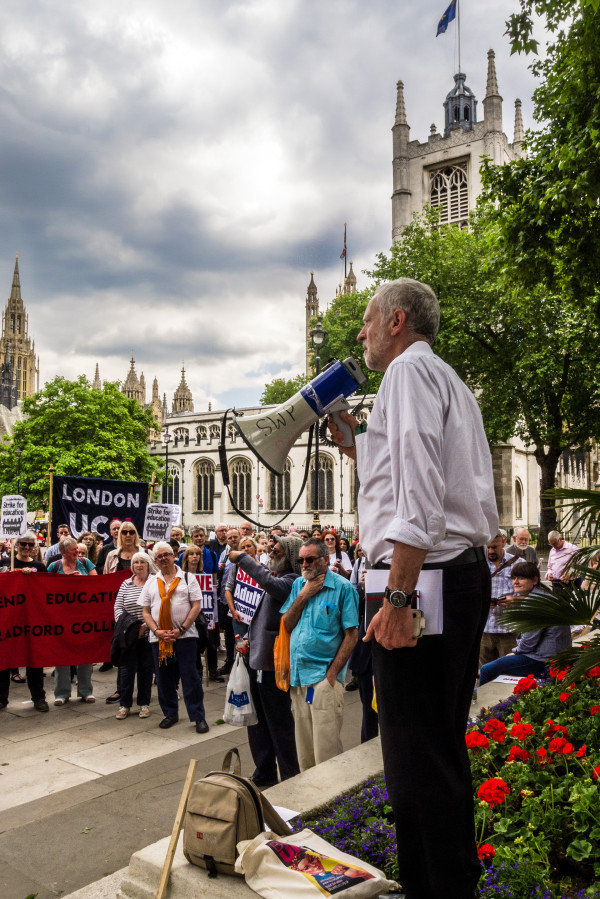 At the London UCU rally on our last strike day John McDonnell, Shadow Chancellor, spoke in support of our strike and Gordon Marsden, shadow FE Minister, told the audience that he supported all the demands of UCU’s FE charter https://www.ucu.org.uk/fecharter

I would encourage all those who want to see Jeremy as Prime Minister in 2020 to support the Jeremy 4PM tour JC4PM Tour Facebook page taking place over the next couple of months. The tour is not only to build support for Corbyn’s campaign but also to build the demonstration called by the People’s Assembly on April 16th.

This is going to be an important mobilisation against austerity. It has been themed as a march for homes, health, jobs and education (national demonstration on Saturday 16 April.) On the day we need to ensure that UCU has its own contingent with the defence of Further and Adult Education at the centre of it.

It matters who leads our union

The NEC and Vice Presidential elections now taking place in UCU are not disconnected from the issues discussed above. There is a clear choice in the elections for these seats. There are those standing in this election who have been at the centre of organising resistance and action to defend FE/HE and those who have not. We have a choice between those who have been active in their branches, doing casework, leading campaigns and fighting redundancies and those who have not, and we have a choice between those who are building their regions through taking initiatives to ensure that the future of our students and members are secured and those who are not.

I know who I will be voting for (https://uculeft.org/2016/01/ucu-vice-president-and-nec-elections/)