UCU left statement to defend pay and the sector.

All out for 10th November strike.

Yesterday the Further Education Committee voted for strike action to defend pay and pursue our claim for £1 per hour for all members. This fight underpins the battle for the future of FE.

Further and Adult education is in crisis. This summer, the Government launched a major programme of restructuring and mergers as part of £450m austerity cuts which will see 300 colleges broken up to as few as 70.

This is the biggest crisis in FE since incorporation. It will hasten the decline and marketisation of the sector and, if left unchallenged, there will no longer be a college at the heart of every community. There will be no second, or even first chances for the 3.5 million students we serve. Hundreds of thousands of unemployed teenagers will be barred from a general education and forced down a narrow skills agenda in education factories.

We play a key role in our colleges in transforming lives and opportunities – imagine what our communities would look like without our local colleges. For FE workers austerity cuts have taken the sector to breaking point : job losses, pay cuts, burgeoning workloads, growing class sizes, courses axed. We now face a stark choice – organise for defence of the sector or witness the rapid demise of everything we have stood for.

What can be done to reverse this decline and save the sector?

The YES vote for strike action for £1 per hour extra for all puts a stake in the ground for respect and recognition of the service we deliver. The unions put in a claim for £1 per hour extra for all to restore pay after 6 years of pay cuts but the employer’s response was unprecedented: recommending a 0% offer, implementing the Tory government’s pay freeze. This is on top of attacks on jobs, the casualization of the sector and mushrooming workloads.

Pay is a real issue for members as the cost of living increases. The average monthly rent is at a record high at £816 per month. Rents are a quarter higher than in 2010, with increases outstripping inflation.

The idea the employers are trying to sell is that if we all tighten our belts we can defend the sector and jobs. This is laughable. By implementing austerity cuts and freezing pay they concede the rationale that there is no money for education. Those Principals are now rushing to carve out their own fiefdoms, accepting this rationale.

A pay strike will be effective if it connects with the political mood. It has to call for more funding for FE. We are the guardians of education, the pay cut is a result of funding cuts. Standing up for pay has to be part of demanding funding for the sector.

We should march on BIS as part of our campaign to stop the cuts. We should initiate forums and rallies to build an alliance of unions to break the pay freeze. We must put real pressure on the AoC and the government. We know there are colleges that can afford to pay a better pay award. We can target strikes and also highlight the gender pay gap and that of black workers. We can expose disparity between those at the top and those on the bottom. The whole union can rally to support and generalise these disputes. 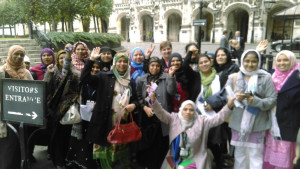 This week saw over 500 ESOL students and lecturers lobby Parliament to fight the £45m cut to the ESOL budget. This vibrant and diverse mass lobby vocalised the anger at the devastation these cuts represent. A break-away group demonstrated against the BIS department responsible for the cuts, taking the argument to the place where these decisions are made. The ESOL campaign is a lesson for all of us.

​The #LoveFE campaign showed the potential for a fightback with two lobbies of Parliament and 42,500 people signing the petition against the 24% cut to ASB budget.

Unfortunately the momentum of this campaign was not sustained beyond local fragmented disputes to defend jobs. By and large these were effective at stopping compulsory redundancies locally, but there was no serious attempt to locate this as part of a national campaign. So far, UCU has failed to mobilise this potential to build a mass campaign to defend the sector or adequately campaign to convince members angry about pay that we can win. Materials and publicity produced for this pay campaign were good and the union reached out to members in a way it had not done in recent years. There is a potential to rebuild confidence among members if we learn the lessons of the past but it must offer a convincing strategy on pay to members. We want no more stop-start approaches to one day strikes, no more retreats like the one from the mass mobilisations of the pension strikes, no more missed opportunities to unite with the NUT and other unions to defend pay. These retreats set us back, gave confidence to the employers and demoralised our members.

With more cuts to be announced in November and the acceleration of mergers, the union must refocus on building a national campaign for the defence of the whole of the sector. This means building for a mass national demonstration with the students and other education unions to defend Education from the Cradle to the Grave.

The CWU recently held a rally with Jeremy Corbyn in Manchester that saw 7000 people attend to defend “the people’s post”. Labour’s new Shadow Ministers have said that there needs to be a battle for post-16 education and called for a National Education Service.

There is potential to engage tens of thousands of UCU members in activity. We can recruit new reps, who joined the mass demonstrations against austerity, welcoming refugees and defending education, and who are excited by the idea of a pay strike.

TUC Congress passed a motion for coordinated, joint and sustained industrial action to break the pay freeze. FE Unison members voted by 95% to reject the pay cut and are writing to Principals asking them to make a significant offer or face ballots. UCU can play a role in reaching out to sister unions to unite to break the pay freeze.

All out for the 10 November strike – Fund pay – Fund FE.
The following motion was carried at the FEC on Saturday 17 October

2. The motion passed at the TUC calling for coordinated, sustained, joint action to break the pay freeze.

3. The successful mobilisation for the ESOL and adult education lobby of Parliament.

1. That for a pay campaign to be successful we need to locate it as part of the wider defence of further and attack education.

2. That further targeted action will be required to force concessions from the employers.

1. Call a national strike on 10 November.

2. To book a venue close to Parliament for a national rally at 1pm in London. We should invite speakers including MPs, sister unions, NUS, adult education campaigning bodies e.g NAICE, Action for ESOLl, and Labour leadership Jeremy Corbyn, John McDonnell, and shadow education ministers such as Gordon Marsden and Angela Eagle. Where appropriate regions or cities should call their own local rallies.

3. Demonstrate at BIS in London following the rally.

4. Contact the NUS to join their protest later on the same day.

6. Ensure campaigning materials are produced to make the case for funding pay as part of the campaign for funding FE. In these materials we should make the case for our pay claim, including highlighting inequality by gender and ethnicity, the lowest paid and those in casual contracts, the rising cost of living, principals pay and the need for parity with school teachers pay.

7. Contact sister trade unions to discuss and develop a coordinated strategy on pay.

8. To reconvene FEC at a time to be agreed today to review the pay campaign and agree the next steps, which could include how to implement the targeted action.

9. We should also explore how to take a national campaign forward such as organising for a national lobby of Parliament in the new year to defend pay and fund FE.