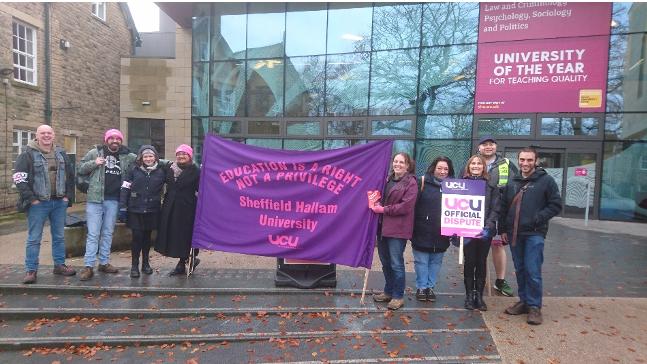 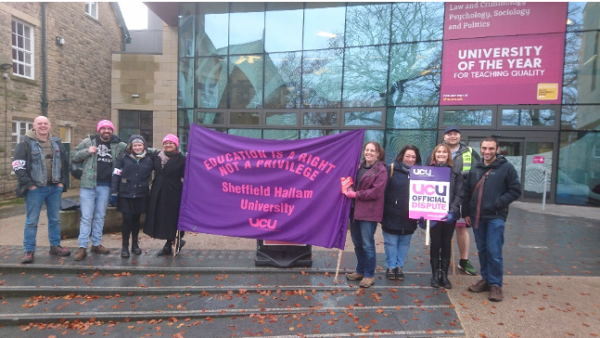 One of the Collegiate Campus picket lines in late November 2019

Excessive workloads are the scourge of the Higher Education sector, having been massively intensified over the last couple of decades, driven by marketisation – cutting costs, improving our ‘offer’, gaming metrics. In the post-92 sector this has taken the form of repeated attacks on the ‘national contract’, the framework for terms and conditions in the former polytechnics.

Some of these attacks have been incremental (a cut to dissertation supervision here, a larger class size there) while others have sought large scale increases in workload at a stroke.  In 2016 members at Sheffield Hallam faced the latter. Like similar efforts at Liverpool John Moores University that the local UCU branch saw off, these moves were couched in terms of ‘equity and transparency’. Yet it was clear to our members that a shift from primarily accounting for work in terms of ‘teaching hours’ to ‘teaching related hours’ would by sleight-of-hand create phantom ‘spare capacity’ on our members’ work-plans and lead to significant intensification.

Negotiations with management were stretched out over three long years, during which time they pressed ahead with the detrimental changes to work-planning. We already had a wealth of local evidence on endemic over-work, from external consultants’ reports to a survey of zero-hour Associate Lecturers and stress surveys of conducted by our H&S officer in 2015. We added to this with workload surveys conducted in 2017 and 2019 that revealed staff to be regularly working in excess of 60 hours per week and that 82% believed workload increases were due to the new framework.

And yet negotiations took us nowhere and our evidence was brushed aside. As a result, in spring of 2018 a branch meeting endorsed the pursuit of strike action. National disputes came along later that year and we decided to pause our local action to throw our energy into the national campaign. On reflection, this was a mistake. Though we launched our first ever serious drive to ‘get the vote out’ (largely by email), we ‘only’ achieved a 43.8% turnout on the disaggregated ballot. I say ‘only’ because this was perhaps the best turnout in any strike ballot in the history of our branch, but as we know, fell below the threshold mandated by the Tories’ anti-trade union laws. 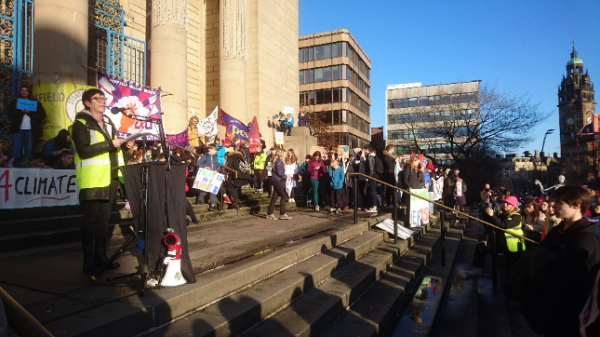 As we also know, when the ballot was re-run in early 2019 on a nationally aggregated basis, we also missed the legal threshold (national turnout was 41%). Nonetheless, this was the get the vote out campaign where our branch really started to find our feet. We produced our own leaflet, which localised arguments around executive pay, expenditure on buildings, the size of the gender pay gap and the casualised workforce. We got serious in terms of checking confirmed voters off of membership lists and even had our first foray into phone-banking.

As 2019 progressed we decided we had to return to the strategy of a local dispute in order to galvanise our membership. This must be seen in the context a decade where much national action was tokenistic at best (even though many were heartened by the success of the 2018 USS strike and the strength of picket lines at the neighbouring University of Sheffield). We geared up for a local indicative ballot in June/July of 2019, running as many phone banking sessions as was necessary until we were confident a majority of members had voted. In the end the result was 82% in favour of strike action on a 66% turnout. For the first time a win on statutory ballot under the new anti-TU law was in sight.

National disputes were then announced in the summer of that year, but this time we decided not to side-line our local dispute, but to push ahead with it, coordinating with regional officers so that the ballots for both disputes were posted out on the same day. This was the right decision, and the successful roll-out of our refined GTVO campaign saw an 84% vote in favour of strike action on a 53% turnout in the local dispute, followed a couple of weeks later by 76% vote in favour of action on a 56% turnout in the national dispute.

With this leverage we saw improved offers from management to settle the local dispute, but they did not go far enough and so we coupled 8 days of local action to run concurrently with those announced in the national dispute, leading to the first local strike at Sheffield Hallam in decades! During the strike, our membership was rock-solid, our pickets were bigger than ever, our website ran daily updates, we worked closely with the fantastic Sheffield Hallam Students Support the Strikes, held local rallies and a fantastic joint rally with University of Sheffield members (addressed by Jo Grady). We also made the most of management’s PR missteps – such as the now infamous ‘grass form’ – and hammered home our arguments to the local media. We even held a disco-picket!

While we saw some further movement from management in the new year of 2020, they had not met us halfway and so the branch also conjoined the local dispute to the 14 days action beginning in late February. During these strikes the breakthrough came and management offered us a deal that we could put to members, leading to the suspension of local strike action at the end of week 3 of that run (but remaining out on the national dispute). Ultimately that deal was endorsed at  a well-attended branch meeting (120 present) and an indicative ballot (93% in favour).

As I write this account, we now six weeks into the lockdown as the Coronavirus rages around us. There is a great deal of uncertainty as to what happens next. Nevertheless, it is important to take stock of what we have won at Sheffield Hallam. Significant increases in the hours on our workplan for ‘General Academic Duties’ (a catch all column for meetings, training and administration) and marking, the restoration of tariffs for Module and Course Leadership, and new agreements on identifying and tackling excessive workloads.

More than anything else, the first local strike action at Sheffield Hallam University in decades has rejuvenated the branch, adding close to a hundred members (taking us to around 900), leading to  new reps in departments that haven’t been covered for many years, and a membership that is increasingly vocal on a range of issues, from casualisation to bullying and harassment.

Our members can be extremely proud of themselves, as a branch we’ve moved from passivity to action. We end this dispute stronger, more confident and more effective than ever, ready to face whatever challenges come down the line!