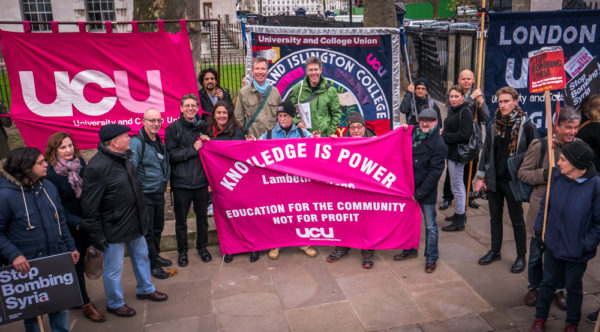 The FEC met on Friday and overwhelmingly (only one vote against) agreed to launch an industrial ballot over this year’s national pay claim. The meeting was upbeat. The results from the e-consultation were the most positive results for many years. With the need to comply with the new trade union laws, which stipulate that a 50% threshold must be reached in any industrial ballot before any action is implemented, these results provide an excellent platform to build a significant campaign around pay.

FEC members reported on the positive response they got from members about the pay campaign. Many branches that attempted to implement a systematic GTVO campaign got very good results.

The FEC agreed that the context of this year’s pay campaign provides favourable circumstances. With the Conservative government in disarray, and the cabinet split over lifting the public sector pay cap, the impact of a successful campaign involving strikes, demonstrations and lobbies could have a decisive impact on the governments’ and employers’ position on pay.

UCU and other unions met the AoC on 19th September where they made a recommendation to the principals to award 1% – another pay cut. The AoC added:

‘We note your comments on ethical leadership and where colleges are able to afford a higher award, they may wish to do so.”

Next steps in pay campaign: Prepare for action

The FEC agreed to automatically put all those branches that gained a 30% or above turnout into the national ballot. The FEC also agreed that those branches that achieved below a 30% turnout but request to be in the ballot should be allowed to do so. If you are one of those branches. contact the regional office or an NEC member to discuss. The ballot will be a dis-aggregated one*.

Another motion was passed, again overwhelmingly (one vote against), which outlined how we can now take another leap forward in ensuring that we get an even greater turnout and number of YES votes for action in the up-and-coming industrial action ballot.

Borrowing from the incredible Postal Workers campaign, where they smashed through the Tories’ new ballot thresholds, the following action points were agreed:

1) UCU to organise for the forthcoming ballot:

i) An electronic mass meeting and invite GS and Jeremey Corbyn/John McDonnell to speak.
ii) To encourage members to bring their forms into work to pose for a collective ‘posting your ballot paper’ photo.
iii) Regional officials with NEC and reps to help less organised branches.
iv) Materials to be sent out a week before the ballot is launched.
v) An email a week throughout the ballot from the GS to members.
vi) Social media to be used to GTVO.
vii) Encourage Regional committees to organise local pay rallies where possible with other unions.

The timetable for the ballot will be out soon. What to do now:

At a well-attended London Region on Saturday the committee agreed :

Free UCU membership for those in non-lecturing roles

As some of you might be aware UCU has launched a free membership offer to those members of staff in non-lecturing roles. Both at the FEC and London Region delegates raised a number of concerns regarding who the offer actually applies to. If you have any queries about this, contact the regional office. If you have a particular group of workers in mind that you think could apply but aren’t too sure send their JD to the regional office and they will advise.

* An aggregated ballot is one that all members are involved in and where the outcome is binding on all.
Dis-aggregated is where all members vote on national action on a branch by branch basis but the branch that votes against action does not impact on the total vote.

The FEC’s options were limited by the NEC’s previous decision to impose the 50% turnout figure introduced by government on all internal union consultations.