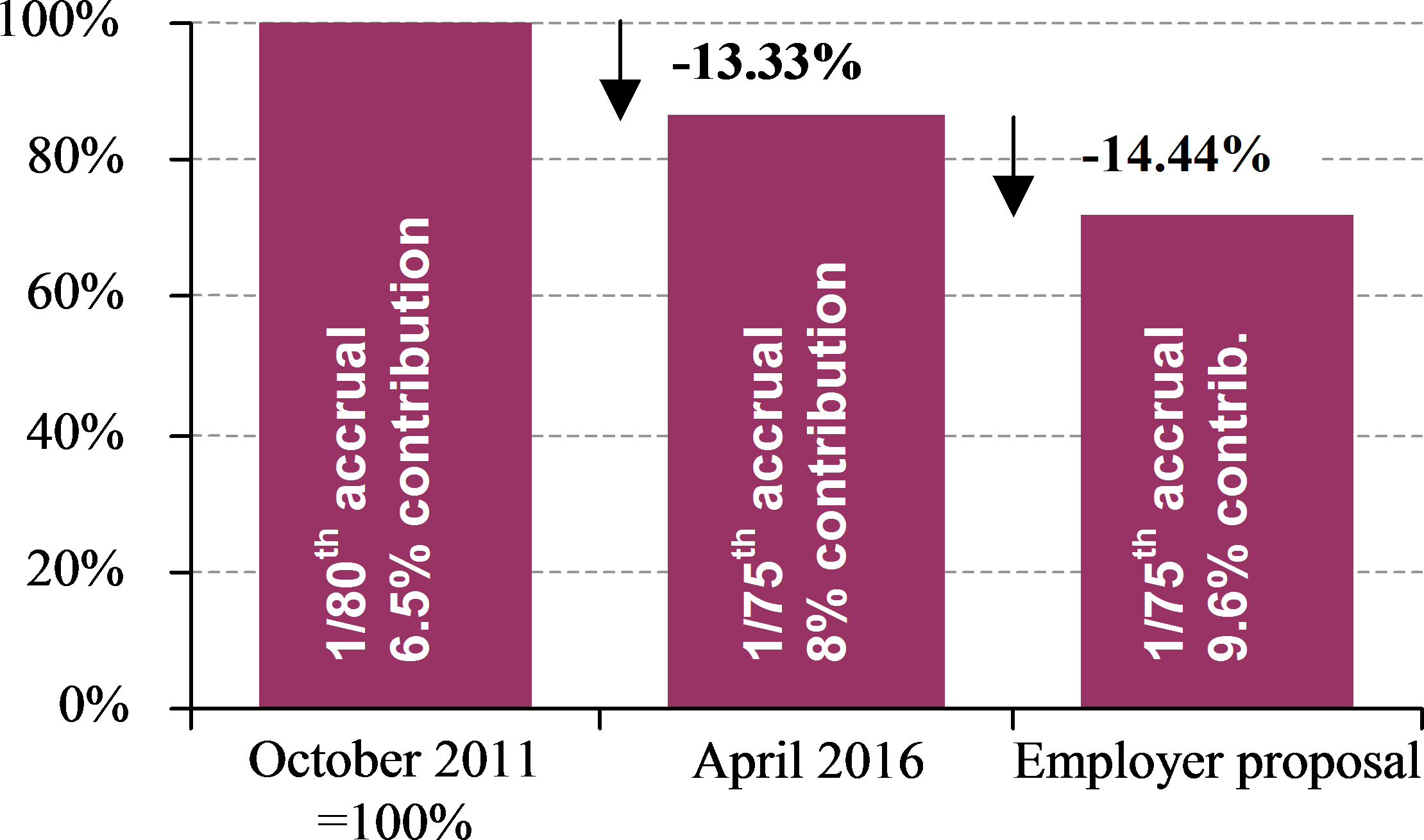 What is at stake

This is what is happening to our USS Defined Benefit pension. If we were to accept UUK’s offer, USS will pay us a pension worth less, pound-for-pound, than three quarters of the value (72.22%) of the 2011 CARE scheme.

And that scheme was a huge cut from the Final Salary scheme that had existed for years. 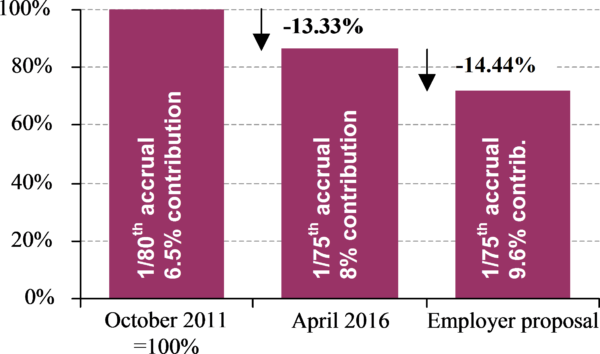 This is a deliberate policy by the employers, working in concert with those in USS and the City who would like to see the back of Defined Benefit. In 2018 UUK used their majority on the Board (and the casting vote of the Chair) to impose Defined Contribution.

The entire case for increasing contributions is predicated on a ‘deficit’ that has been widely debunked. The simple fact is that if the pension scheme were not ‘de-risked’ there would be no projected deficit. ‘De-risking’ (selling off investment assets and buying gilts) began after the employers demanded it in 2014.

This attack is not a one-off. It won’t be stopped by negotiations — however clever the negotiators. Sally Hunt knew that. That’s why in 2017, she used her influence on the HEC to build the strike. She silenced the right wing of the HEC, openly campaigned for strikes and allied with the Left to make sure they took place.

We could have fought and won to commit UUK to No Detriment. Had we done that, we would not have to fight now.

But two years on, USS and UUK are turning their backs on the Joint Expert Panel, the result of the 2018 dispute, ignoring UCU, and demanding 20% more from members — all for the same pension benefits.

Worse, increased employer contributions will inevitably provoke the university employers. Trinity College Cambridge has left the scheme. As costs on them rise, universities will demand 100% DC. And every cut in DB pension value means less for members to defend.

We cannot leave it to the Joint Expert Panel to rescue us. USS is being undermined by market greed.

Our pension is the victim of Higher Education marketisation.

It is no accident that 2011 marks the beginning of the decline for USS, a scheme that survived stock market crashes and paid 1/80th Final Salary for decades. Before 2011 members paid 6.35% employer contributions. After UCU lost that round, contributions were forced up to 7.5%, and Final Salary was closed to new members.

Before 2011 the employers’ surpluses (profits) were small. Universities were not expected to turn a profit. For example, in 2003, HESA reported a sector surplus (both pre- and post- 92) of £65 million.

But by 2016 the sector surplus was £1.5 billion (on stricter reporting standards)!

The mad competitive scramble to recruit undergraduate students and bank £9,000+ tuition fees has set university against university, college against college. It has encouraged them to borrow over £10 billion in capital projects, and it has created winners and losers.

The premise of USS’s stability is mutuality — that the sector works together to provide pensions and the employers together contribute stability to the investment strategy by underwriting the portfolio. This is known as the ‘employer’s covenant’.

But Higher Education competition is destroying mutuality and trust. Why would UCL loan to USS to underwrite the risk of King’s, its competitor down the road? Why would King’s underwrite UCL?

Anyone who thinks that accepting this offer will ‘tide over’ USS has not been paying attention.

Members struck for 14 days in 2018 because they knew that our fight to defend USS was also a fight to defend the future of Higher Education. We had to resist the war of all against all that the sector had become locked into.

In 2016, HE Minister Jo Johnson drove through the Higher Education and Research Act. This allowed universities to declare bankruptcy, as Greenwich School of Management (aka ‘GSM London’) did in July.

No wonder employers are concerned about carrying each other’s risk!

The Tory Government is divided over Brexit. A snap General Election is likely. We have a tremendous opportunity to put Higher Education on the map and put the responsibility for this crisis back where it belongs — in Government. The demand for a Government Guarantee to underwrite USS makes total sense. But we need one now, not when USS is frittered away to nothing.

Since our strikes in HE, Further Education members struck over pay and marched on Parliament against cuts in funding. Our members’ action put FE on the political map and extracted £400 million from a right-wing government led by public school boys!

Taking action in own defence gives members confidence to stand shoulder to shoulder with our EU colleagues and students over Brexit, and stand up to any attempt to divide us in a snap election.

Get organised for Round 2

We have to fight to defend our pensions and pay, and we have to organise the fightback now.

As well as pay cuts, the other symptoms of HE marketisation are rising inequality, casualisation and workload.

We have a fantastic opportunity to bring all of these fights together in the two ballots, uniting both sectors.

The only way to defend our pensions is through strike action beginning in the Autumn Term. We need to approach Get the Vote Out with military seriousness in branch after branch.

We won the first battle, but if we don’t fight now, we will lose the war. We need to mobilise everyone who stood on the picket line in 2018 to organise meetings in department after department — it is time to unite to win the ballot to defend USS, defend pay and defend Higher Education for future generations.