Take back the university – Unite and Fight 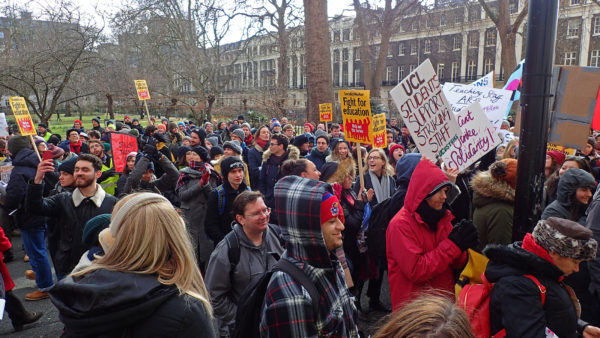 UCU members have achieved something many thought impossible. We bust through the Tory anti-union threshold of 50% turnout in sixty universities. Activists have breathed new life into the campaign to defend USS, and broadened the fight to the post-92 universities, winning ballots on pay, equality, casualisation and workload.

This happened thanks to the flowering of democracy in the union. The 2018 strike movement demanded accountability of union leaders in congresses and conferences. One general secretary election, a turbulent congress, recall congress and democracy commission later and we have a renewed determination to fight at the grassroots.

We also have a new general secretary from the left, and a left-activist HE leadership (see below for next year’s candidates). Now 80% of members in the USS pre-92 universities are on strike. The remainder are in branches whose turnout was less than 10% short of that required – in some cases they were only a few votes short. Many post-92 colleges were also close to the 50% turnout.

A reballot campaign – aligned to the strike campaign – can bring them out.

But branches seeking a rapid reballot have not been supported at HQ. Three weeks after the ballot results came out, we should be starting repeat ballots at the beginning of the strike wave. HEC voted to relaunch the ballot campaign to allow branches to join a second wave of strikes. Branches need to demand a reballot now.

Now post-92 universities have joined the fightback. The ‘four fights’ campaign unites the sector. In total, nearly two thirds of the union’s HE membership are striking in defence of pay, against casualisation, escalating workload and – perhaps most importantly of all – to close the appalling gender and race pay gaps that blight our sector.

Members in post-92 universities were unable to take action in 2018. They were able to deliver solidarity to their pre-92 colleagues. But the astonishing mass strike movement in the colleges inevitably centred on the ‘old’ universities. The action has spread to post-92.

In the 2010 general election, the Lib Dems claimed that scrapping tuition fees was “non negotiable”. Then they did a U-turn to enter a coalition with the Tories. That ConDem government tripled fees to £9,000 a year and part-abolished the block grant. Then in 2014 they removed limits on student recruitment, unleashing the gold rush and war-of-all-against-all we see today.

Since then university management greed has expanded courses and student numbers. Over £10bn was borrowed for new campuses and buildings. The Treasury’s tuition fee debt mountain is now around £100bn, half of which will never be repaid.

University employers are gradually waking up to the reality that this gold rush must come to an end. Augar proposed cutting the home student fee to £7,500 a year. This would wipe out profit margins universities are banking on.

The importance of this general election to change course cannot be understated. Both the Labour and Green Party manifestos call for abolishing tuition fees and bringing the HE market under control.

Despite record surpluses as much as £2bn a year, pay has been cut by 20% in real terms over the last ten years. Fee-market uncertainty encourages expansion at the expense of job insecurity. Workload has skyrocketed. Workload and job insecurity are two sides of the same coin: the whip of the causal contract driving up workload for all.

Market competition and secrecy means UCL does not know what Imperial has borrowed or whether its sums add up, and vice versa. USS depends on a ‘mutuality’ principle (all universities share pension risk in case one goes bankrupt). This is undermined by mutual distrust and corporate self-interest. That is why a government guarantee to underpin the scheme makes sense.

Our demands are ridiculously reasonable. The sector is making record surpluses. In many colleges, interest payments on borrowing exceed the few extra million apiece that would be needed to settle this dispute. But if the Treasury needs to help out, so what? This is a national dispute, universities are a national asset, and we need a national settlement.

In pre-92, if UUK agreed to end the fictional ‘de-risking’ USS valuation model, they would immediately recoup 3.1% of salary costs. USS does not need extra contributions. Between 2017 and 2019, its assets grew by £10bn to £74bn. The increases USS is demanding cannot yield more than £1bn over the next two years.

This strike is a warning shot. Eight days show we are serious. By uniting together we have the power to shut down the whole sector. We may need to strike next year.

Fighting for the future

Our strikes prove that the university is the staff. The ‘academic team’ is the entire staff body, from porter to professor. Education is the gift each generation nurtures and hands to the next. Thus universities are central to ensuring that climate science is implemented, and the world economy is moved onto a sustainable basis.

We stand with our students, and the rest of society. University funding is a pact with society: academic freedom is a freedom of a free society. We stand in solidarity with student and staff protesters in Hong Kong and other countries where those rights are being trampled on. We stand against all who would divide us by race, religion, sexuality, gender or physical ability.

Everyone has the right to benefit from a free education. Its time to unite and fight for the future of Higher Education – and for a freer, more sustainable society for all.