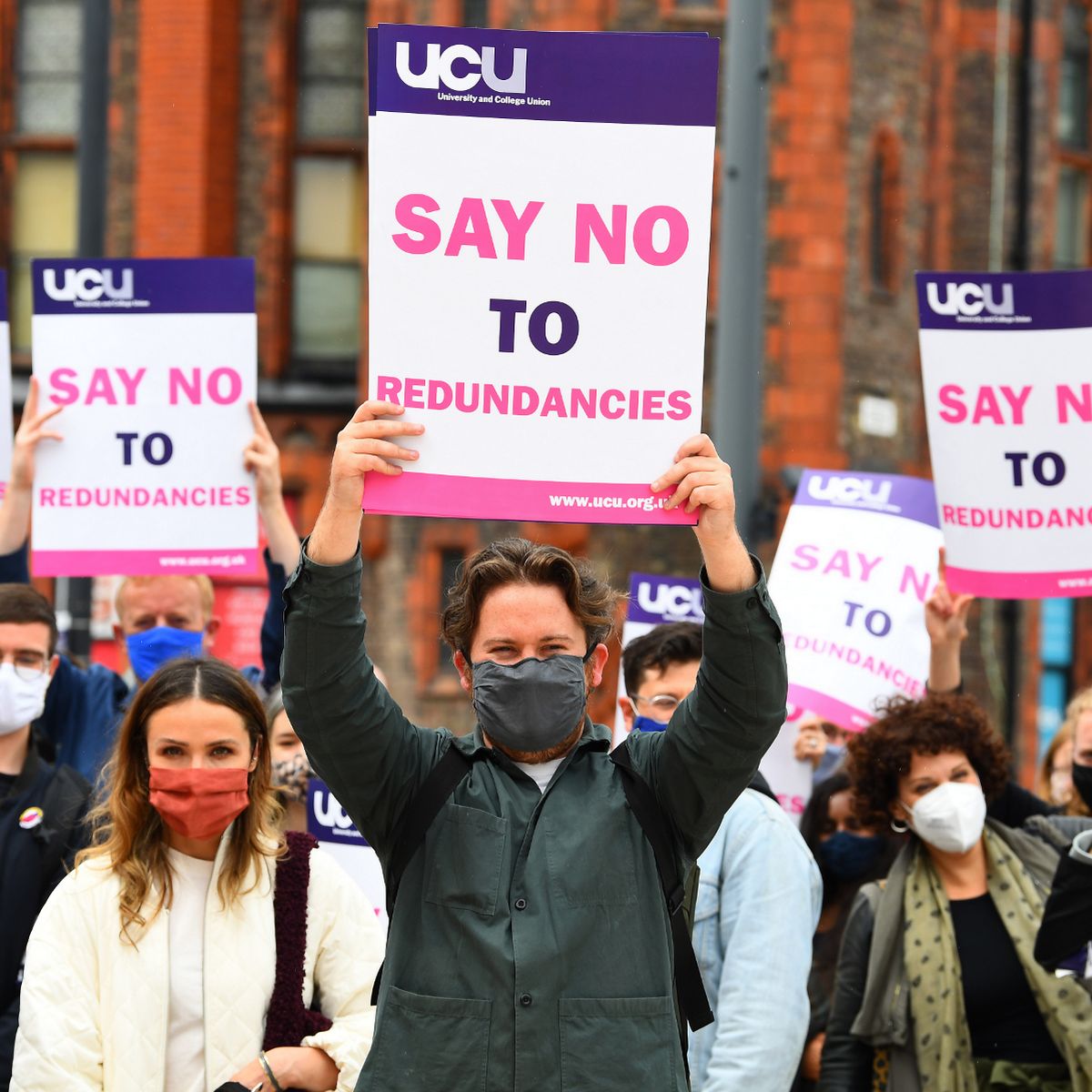 Our higher education institutions continue to be a battleground. Marketisation and competition push our employers to drive down the share of income spent on staffing and continually attack our pay, pensions and conditions.

At the same time, the Tories’ political agenda aims to curtail the autonomy of universities and stifle critical intellectual inquiry in favour of a utilitarian conception of education which prioritises STEM subjects. Decolonisation, anti-racism and solidarity with the Palestinians are all in Johnson’s and Williamson’s sights in their ‘war on wokeness’, as is the continued rolling back and delay on legislation supporting LGBT+ liberation, particularly impacting our trans and non-binary colleagues and students.

The priority for this year’s Higher Education Sector Conference is how our union is going to respond to the intensifying attacks on the working conditions of university staff. The continuing existential threat to the USS pension scheme forms one prong of these attacks. The other is the erosion of the value of our pay and the failure of the employers to address persistent pay gaps, rising workloads and the scourge of casualisation.

Motions HE1-9: Pay, conditions, ‘Four Fights’ & equality across the membership

The first group of motions on the HESC agenda relate to pay and the ‘Four Fights’. We believe it is crucial the union continues to push forward on this groundbreaking dispute – we must resist the separation of its four elements. Pay inequality, job insecurity, pay devaluation and rising workloads are inextricably linked, and one strand will not be solved without addressing the others. Delegates should support HE1’s endorsement of the national pay negotiator recommendations for the 2021-22 pay campaign. These are to declare a dispute if there is no improvement on the employers’ pay offer of 1.5% and the other aspects of the claim, and to launch an industrial action ballot if members reject the offer in a consultative ballot. Even the government’s and the employers’ preferred CPI measure of inflation is now higher than 1.5% while RPI stands at 2.9%. It is likely that any moves to release lockdown will push up prices across the board as companies attempt to recoup their losses.

This year’s claim comes on top of unfinished business in 2020-21 when as a reward for our pandemic efforts we received 0%. Motions HE2-5 all call for re-igniting an industrial campaign around the ‘Four Fights’ and should be supported. Amendment HE2A.1’s call to again link the fight over pay to action over pensions is particularly important. Our ‘dual dispute’ strategy in 2019-20 successfully united members across pre- and post-92 institutions and was only derailed by the onset of the pandemic.

HE6 makes the important point that there is a link between jobs, casualisation and workloads and provides a model for addressing these issues at a national level. HE8 and HE9 address important but different aspects of equality within our union. HE8 calls for us to ensure our Academic Related & Professional Services (ARPS) colleagues have the tools required to organise within the union and workplaces. HE9 introduces policy which solidifies our demands for employers to take the health & safety of black workers seriously and implement suitable and sufficient risk assessment processes to properly protect black members.
We recommend delegates support motions HE1-HE9 and the amendments.

It is make or break for UCU over USS. The clock is ticking before USS Limited impose devastating cuts on the USS defined benefit Career Average Revaluated Earnings scheme, with the connivance of UUK. The 2020 Valuation creates a situation where UCU members will pay more into their Defined Benefit pension than they can ever expect to draw down, either because benefits will be cut or contributions raised, or both. Members will likely then leave the scheme, risking driving the scheme into closure.

More negotiations without industrial leverage will not materially change this. There is no clever technical fix, whether CDC or Conditional Indexation, that will change that equation.

We have to stop the 2020 Valuation being imposed. The only way to do that is through building a fightback with a plan for escalating and hard-hitting strike action. We need to rally around the strategy elaborated in Motions HE11 and amendment HE11.A1 (preferably not HE11.A2) and HE12. We need action in the autumn term, which means a ballot over the summer and getting organised now, otherwise it will be too late.

There is an issue regarding the ‘SWG Principles’. We think that now is not the time for mixed messages and compromises we will live to regret. We call on members to support HE13. This sends a clear message to the employers and our members that we will not compromise in fighting for their pension – which will be essential in getting the vote out and mobilising members onto picket lines.

Members should listen to whether there are any consequentials announced on the basis of Motion HE10. If there are no consequentials, and other motions are treated as amending the report, then vote for HE10 and amend it by supporting HE11, 12 and 13. But if HE10 is treated as causing HE13 to fall, colleagues should vote against HE10 but vote for the other motions.

We ask delegates to vote for HE14. We will need a legal challenge to support industrial action. Its costs are only a fraction of what members will lose. Vote for HE15 – we need governance reform – but this should not be seen as an alternative to industrial action. Vote against HE16 or for remittance, because of problems with Resolves (b) and (c).

This grouping of motions address diverse issues impacting our members, and which go to the heart of our fight to defend post-16 education. HE17 addresses pensions inequality for women and calls on UCU to ensure TPS and USS are fully equality impact assessed, that we commit to fighting damaging changes to both schemes, and for webinars to help educate and empower members around pension inequality. HE18 and HE19 both address the ideological government cuts to ODA research budgets. These cuts were sudden, plunging scores of researchers at all career stages into uncertainty and with their livelihoods snatched away. HE20 highlights the impact of discrimination and casualisation on promotion in HE and calls on HEC to produce tools to help branches to organise around this issue.
We recommend delegates support motions HE17-HE20.

All motions in this section should be supported. HE21 strengthens the union’s commitment to support local disputes, avoiding the current practice of withholding strike pay from disputes which do not meet criteria of ‘significance’. HE23, HE27 and HE34 are all about building a campaign against the threat of the IHRA’s working definition of antisemitism to academic freedom. HE28 seeks to defend the right of staff and students to engage in peaceful protest and lawful picketing on our campuses. These democratic rights are threatened by the corporatisation of HE institutions and the Tories’ Police, Crime, Sentencing and Courts Bill. HE40, as amended by LGBT+ Members’ Standing Committee clarifies and reaffirms the unions’ commitment to defending academic freedom and ensuring the human rights and wellbeing of trans and nonbinary members are not eroded under the disingenuous deployment of ‘freedom of speech’ arguments. Amendment HE40A.2 strengthens the motion with specific examples and actions; however, we recommend delegates support the motion with or without amendments.

HE29 seeks to address the acceleration of the adoption of technological solutions such as Artificial Intelligence and Automated Decision Making in the HE sector in the wake of the pandemic. It is important we equip members to deal with these technologies as universities continue to embrace learning technology in the hybrid classroom – something unlikely to go away any time soon. The theme of learning technology is picked up again in Motion 36, calling for research on the impact and implementation of tech in HE.

There are a number of motions that address ethical issues in the way HEIs operate and expand. HE30, HE31, HE35 and HE37 all recognise intersecting issues that impact our members and our students, and we urge support for these motions. The employers’ organisations are highly unlikely to be in favour of the open negotiation raised by HE32, but the motion should be supported on the basis that the possibility is worth exploring. We are in favour of the recruitment drive in private providers proposed by HE33, and for the attempts to address the various dangers to our working environments and practices arising from the pandemic raised by HE35 and HE36. We welcome HE38’s call to resist teaching-only institutions, the spread of which would be detrimental to both students and staff.

Prepare for the battles to come

HESC provides an opportunity to solidify and sharpen our union’s campaigning at the close of a very difficult year for many. We urge delegations to vote to strengthen the hand of national negotiators and branches, and to prepare for the struggles ahead.