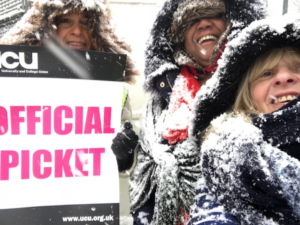 Jo McNeil and Mark Abel were elected as Vice Chairs of the HEC for pre and post 92 sectors respectively. The overwhelming support they received (in the case of Jo the vote was 20:11 while for Mark it was 18:7) is testimony to the success in elections last February for the left. While a small decision in and of itself the influence of the Vice Chairs is important for the way the HEC runs.

The elected HEC chair participated in the meeting by telephone owing to a prior volunteering commitment. The meeting was therefore chaired by the newly elected Vice Chairs. Immediately motions brought by members were placed within the agenda paper so that important issues could be debated fully. As a result a thorough discussion on pensions took place which then led onto the debates over pay. Time was not wasted with filibustering and instead plans for the defence of members were laid.

The FBU’s victory in the courts on pension rights, over age discrimination, is a major victory. It has major implications for all public sector workers, including our members in the various Teachers Pensions schemes, preventing the worsening of pensions for younger workers due to scheme changes. Employers and government will no doubt seek to undermine this victory but we now have an opportunity to build a wider defence of pensions across the whole of the public sector. The TUC have since 2011 abandoned defending pension rights for millions of low paid workers leading to the ending of retirement for many. Now there is an opportunity to rollback this defeatism. With UCU preparing a new ballot on USS (see below) we could quickly become part of a much wider and more powerful wave of resistance against austerity.

HEC agreed to ensure that we do not develop a trading off between pay and pensions. UCU will now seek to replicate the successful initiative in Bradford College which combined two separate ballots on pay and jobs, successfully exceeding the 50% threshold in both ballots. This is important because we will now seek to ensure that casualization and pay inequalities campaign across the whole of the HE sector is linked to our USS pension campaign in a simultaneous ballot in the pre-92 sector. In doing so it demonstrates that UCU’s new leadership is rejecting the compartmentalisation and sectionalism of the sector which on occasions leads younger workers to blame older workers, casusalised workers to blame permanent workers or women workers to blame male workers. When we strike together we win together. That must be our message to all members.

The two ballots will run for seven weeks, starting from 9th September and run until 30th October. The ballots will run on a disaggregated basis allowing branches to add local claims on casualisation and gender pay to the national pay and pension issues. Industrial action will then take place before the end of the first semester if employers do not address all of our pay and pension demands. Pensions are our deferred pay and we must not allow penury in retirement to occur due to falling real wages. There was no plan at all for industrial action brought to the meeting or mentioned in the campaign plan. It was the Vice Chairs who started to put a plan in place, proposed it from the floor and got agreement from HEC. Otherwise there would have been no industrial action strategy in place for the USS dispute.

UCU activists in London Region, USS briefs, Branch Solidarity Network, UCU Left and others are committing to organising a #UCUTransformed conference, provisionally planned for 2nd November, to plan the industrial action. Anyone who wants to get involved should get in contact as planning meetings will begin shortly.

There were other important motions on USS passed particularly critical of the governance failure and changes to the rules of the scheme.

The undermining of contractual status in post-92 institutions was raised and the development of a campaign in defence of the post 92 contract in England and Wales was recognised. Two motions defending the contract and challenging the ever rising number of contact hours is central to a defence of the post-92 sector. UCU’s own advice to branches, failing to recognise the importance of defending scholarship, is being used by employers to ride rough shod over the contract.

Boycott of Senate House over outsourcing of cleaners

Outsourced cleaners at Senate House, University of London, have organised a boycott in their campaign to force Senate House management to bring them back into direct employment with access to sick pay and pensions. This campaign has already been victorious in many of the other London University colleges. While some of our members within Senate House UCU have raised fears over their own position as a result of the effectiveness of the boycott we, as a union, must defend the cleaners. We must also defend our members if management seek to make cuts in response. UCU members have nothing to gain by accepting management lies and instead should demand the solution lies in the hands of Senate House management. Namely, negotiate with the cleaners union, the IWGB, and bring the cleaners in house now.

Finally, the new found atmosphere in this HEC must now lead to a thorough going transformation of the operation of UCU at a national level. We must ensure #UCUTransformed continues at all levels of the union and the branches understand that the national organisation will pull out all the stops to not simply defend their jobs, pay and pensions but push back the marketisation destroying higher education. The radicalisation of members from last year’s strikes continues to find its way into the structures of UCU. We cannot squander these opportunities and the left therefore has a responsibility to work together in delivering for members. We will continue to have plenty of disagreements amongst ourselves but those disagreements cannot lead to division over delivering action. Many have talked about a member-led union. Now we’ve a responsibility to deliver it.