Skip to content
Congratulations to UCU members at CCCG. This is a brilliant victory by your members. Staff working in FE are among the lowest paid in the education sector. This award, alongside the fractionalisation agreement is an important step in ensuring staff are valued for the vital work they do. Congratulations to the governing body in agreeing this bold and progressive step forward and I hope this signals a change in direction that the whole sector can follow. 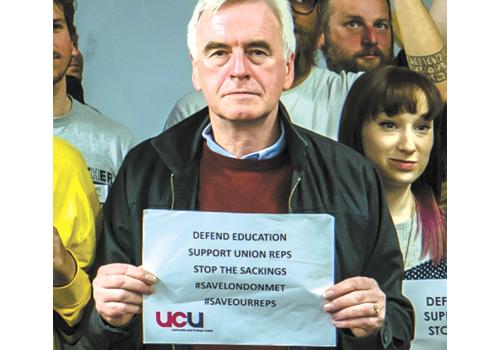 UCU branches met today across the Capital City College Group (CCCG – City and Islington College, Westminster Kingsway College and the College of North East London) and agreed to settle on the 2018/19 pay claim.  After several weeks of negotiations, the governors have agreed a pay offer of 5% to all staff in the group who earn less than £55k. Senior managers that earn between £56k up to £76k will be awarded 3% and those earning £76k+ will not get a pay increase this year.

The CEO has waived his right to an annual bonus.

The 5% award will be back-dated to September and is worth up to £2K pa which works out as up to £140 per month take home and will be put into the December pay packet. This will mean staff should expect up to £600 extra in their December pay packets.

This is an historic deal which will, we hope, give other colleges the confidence to follow. CCCG is the largest group in London and the third largest in the country.

It has been a breath of fresh air working with the new CEO who has a very different approach to industrial relations and a very clear and optimistic vision about how the group can go forward both financially and educationally.  He made clear from the beginning that UCU’s case was ‘irrefutable’. He agreed that reserves could be used to fund a pay award and it was necessary to pay staff a decent wage to motivate existing staff and to attract a future generation to the sector.

He also made a commitment to bring outsourced services back in-house and believes that contracting out such work is losing the group significant revenue.

A 96% vote for strike action with a 63% turnout kicked off our campaign.  Our members braved snowy and rainy picket lines and lobbied the governors with home-made banners, sang their hearts out demanding ‘the money is there we want our share’. We took 8 days of strike action.  What did those eight days of action achieve?

·         Pay: 5% for 2018/19. This is worth £140 extra a month and will be backdated to September and will be in the December pay packets. The CEO has also made clear that the college has an ambition to pay 3% + inflation for the next two years. This agreement we cover all staff working in the group.

·        A £500 one off payment to all staff across the group and after a mass petition campaign management have agreed to look to extend this one-off payment to outsourced staff.

·        Also, UCU after the strike entered into negotiations around creating a new cross college JD/contract for Learning Support Assistants (LSAs). Many LSAs joined the union during the course of the strike.  Whilst they all benefited from the one-off payment and will benefit from the 5% award but because they are on bushiness support or agency contracts did not benefit from the new fractionalisation policy. Negotiations are yet to be completed however positive moves are being made to place all LSAs onto hourly paid and permanent contracts with career development opportunities structured in and fractionalisation.

UCU at CCCG would like to thank all those who supported us through financial and messages of support. Your solidarity made all the difference to our successful fight for justice. We also would like to offer solidarity to the six FE branches that will be striking on the 28th/29th November and all the branches that are re-balloting.

We hope our victory will soon be yours.