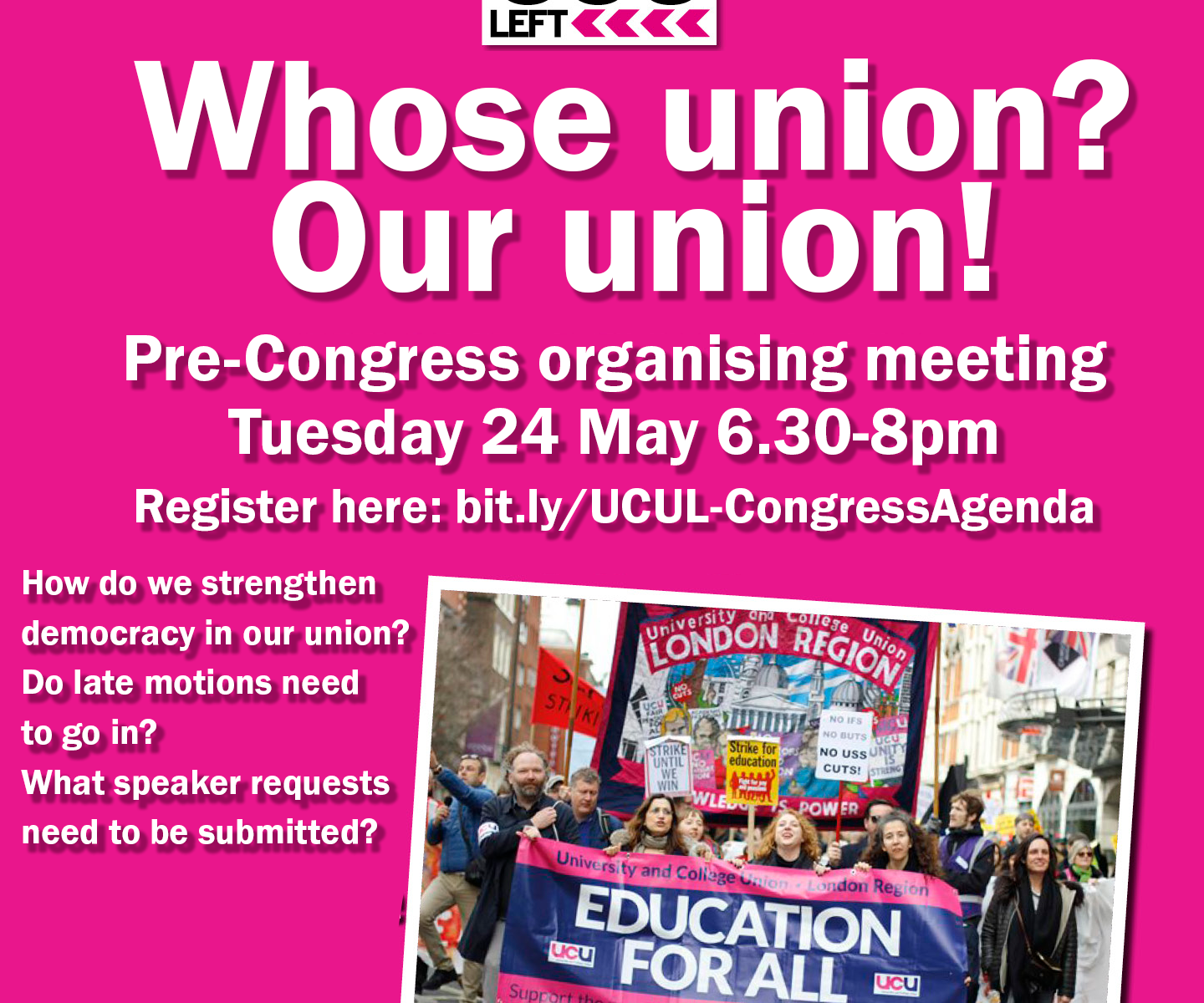 Yesterday a group of UCU branches began marking and assessment boycotts. These branches are now heroically carrying our USS and FourFights disputes until our union can regroup, reballot and take UK-wide action again. Most of them are threatened with 100% pay deductions as our employers try to intimidate them from taking lawful industrial action. It is crucial for our union’s ability to resist attacks to our pay, pensions and conditions that the whole union rallies to support these fighting branches.

Over the weekend, stories surfaced in the Guardian and Times Higher saying that UCU had abandoned a national approach to the USS and Four Fights disputes in the marking and assessment boycott. It is clear that they have seen emails from national officials to branches asking them whether they really, really want to take the action.

These stories leave a bitter taste for union reps and activists who have been fighting tooth and nail to maintain the action in the face of bullying bosses and silence from HQ. Nowhere mentioned in these stories is the fact that branch reps have been thrashing out a coordinated approach in an attempt to keep up the pressure on national negotiations. Branch-to-branch twinning and solidarity organising has been going on apace.

UCU Left has been careful not to present any surface area for those who want to attack the union while trying to open up the debate about how our action can be effective. But the General Secretary’s tactics are undermining our union.

But if our action is undermined, we need to be clear the fault does not lie with members or reps. The blame lies squarely at the feet of the General Secretary and the union machine she runs. They delayed and delayed the calling of Term 3 action to try to undermine it.

The General Secretary made no secret of her antipathy for action. Having failed to plan strike action to have a meaningful impact on employers in Terms 1 and 2, while members were still reballoting, she wrote to all members with a 38-page plan for taking no action for two years except a mass recruitment drive to the union.

Even if her plans had merit in the abstract, they did not fit a situation where the employers had railroaded through hugely damaging changes to the USS pension and the union had made limited impact over pay. That is why motions supporting the GS’s proposals were soundly defeated at the union’s conferences.

Instead motions were passed calling for a marking and assessment boycott, with strike action to back it up, to be called immediately from the start of term. These were not implemented.

Why was the boycott not called in time for the start of term?

When in March members were reballoted for action in the summer term, everyone knew that this was for a marking boycott. Indeed, the short timetable over Easter was officially designed for this express purpose.The ballot closed on April 8. With the obligatory 14 days, in theory at least, notice could have been served by April 22. Even if one adds another week of delays for paperwork, the employers could have received notices of action well before the start of May.

Concerned at the stalling, branch reps on the floor of the second Sector Conference publicly demanded to know what had happened to the notifications. Branches with mandates wrote to UCU officials, demanding they be issued immediately.

In fact the delays in implementing the marking boycott reflected the same approach to industrial relations that characterised the General Secretary’s overall strategy towards the dispute.

In 2017, previous General Secretary Sally Hunt led from the front, campaigning for branches to vote Yes for strike action in a long ballot over December into January. She supported hard-hitting action in Term 2, and it was only when the action started to get out of her control that she tried to call it off. Despite this, members carried the action forward, stopped a sell-out and prevented UUK and USS imposing a 100% ‘defined contribution’ pension scheme.

By contrast, in 2021, instead of asking what action would be required to maximise the chances of winning, current General Secretary Jo Grady and her supporters on the HEC blocked the summer ballot over USS called by the June HE Sector Conference. (This ballot could potentially have been ‘aggregated’, because there was sufficient time to call another disaggregated ballot had turnout not reached 50% and still take action.) This delay meant that no action could be called until the end of Term 1, and it meant that branches had much shorter periods for disaggregated ballots.

Time and again, the General Secretary proposed, and often imposed, forms of action which defied the wishes of branches. In February, action over USS was decoupled from action over the Four Fights in clear defiance of the union’s position. Immediately after a branch delegate meeting which called for escalating action, regional one-day strikes were proposed. An outcry forced that plan to be ditched but we still ended up with two groups of branches striking separately and tokenistically in late March.

This is why branches have been discussing censuring the General Secretary, and why there is a motion for censure in front of Congress. This is not a personal criticism of an individual, but an attempt to hold her leadership, her strategy and her interventions to account. Failure to implement the strategy decided by members is not only undemocratic. It is undermines confidence among members that we can resist the employers.

What can be done?

Branches with mandates are now eyeball-to-eyeball with their employer. On the one hand the employers are trying to take a hard line, with a large number threatening to make 100% pay deductions. On the other they know that if the action is maintained then graduations will be threatened. The very fact that the boycott is limited to a small number of universities means that they will be under pressure to settle. The most urgent task for every activist, every rep in every branch, is to campaign to raise support for branches taking action. Branches need to urgently commit to ‘twin’ with others. And members should be asked to make a serious regular donation to the hardship fund of a branch taking action. If a large number of members donated a day’s wages for each week of the boycott, the action can be sustained and the employers would be compelled to concede.Importantly, the action can still bite, as a marking boycott does not need hundreds of members to be effective. Members are learning that they have leverage. This is why employers are starting to make local offers before too many members realise their power. Already, Ulster University has climbed down from making 100% deductions in the face of a public campaign against the lockout. And Queen Mary management are embroiled in an embarrassing row about recruiting scab labour via an Australian consultancy outfit. University employers are under real pressure, but time is extremely short.

Reballot over the summer – and Reboot the Dispute

With a minority of branches taking action, it was inevitable that any serious stratregy to affect national negotiations would require the union to reballot all members, which Sector Conference at the start of June has the ability to do.

But that leads us back to the question of strategy and leadership. Many members are asking ‘what’s the point?’ Jo Grady was unable to lead the union to a victory last year. As we have seen, the strategy of the union that members voted for last time was not implemented.

The good news is that the union elected representatives on the Higher Education Committee now show a majority of left reps (UCU Left and independents).

With 80% and 90% votes for action and high turnouts, our ballot results do not show a union being defeated. We need to take stock and regroup in June – and then reballot.

The urgency to keep the dispute alive is underlined by the announcement of attacks on jobs and courses at De Montfort, Wolverhampton and Roehampton. We cannot afford to ‘sit out’ the disputes in the way proposed by the General Secretary. That would invite further attacks. Far better is to signal to the employers that we are reballoting all branches individually, and if they announce attacks on branches they will be guaranteed to convince members to vote for action.