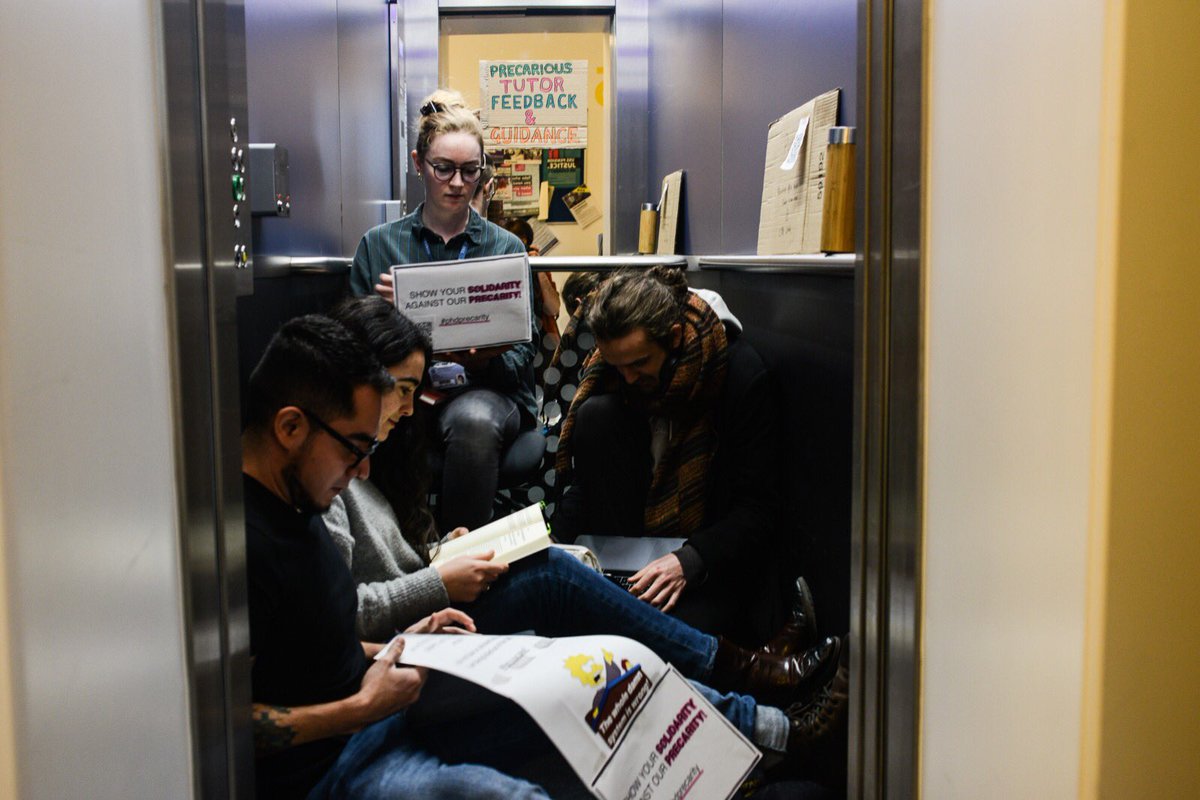 Graduate students at Edinburgh have been organising a creative and highly democratic campaign to highlight the university’s attacks on their working conditions, after managers told research students in the School of Social and Political Science that they would be moved to an under-equipped and under-resourced building across campus from existing post-graduate work space in the Chrystal MacMillan Building (CMB).

Dozens of grad students took part in a work-in on 10 December, using the lifts, toilets, stairwells and management office corridors in the CMB in protest a decision which will increase competition among students over desk space.

We are outraged at the lack of involvement of the PGR community in any decision-making concerning our space. No conversations about students’ needs and the new plans had taken place prior to the decision being communicated to us in September. As the PhD community, we fundamentally disagree with the undemocratic process of decision-making by School management as well as the proposed reduction of PGR hot-desking space based on a top-down interpretation of our needs. The monitoring of our card and network access data is totally unacceptable, and does not provide a sufficient justification for a reduction of space. In response, we have organised ourselves and to date held four extremely well attended, democratically-run meetings, involving over 150 PhD students and creating a space where we can discuss how we understand our needs as PGRs and come up with a set of key demands. They are the following:

The lack of transparency and participation that the School is displaying in matters that affect us as students directly is inexcusable. We should be involved in the decision making processes that affect us, rather than being presented with faits accomplis. Instead, we are being treated as expendable, our contracts made precarious and our office space scarce.”

Following the work-in management made some concessions, admitting that “nothing is set in stone”. Campaign members told UCULeft.org they will be continuing to mobilise in the New Year. Lukas Slothuus, a PhD student in Political Theory said:

This action was incredibly encouraging because it showed the strength of unity and the power of organising. PhD students are usually very poorly organised, both in trade unions and among themselves. We’re breaking out of that situation by organising in a way that brings collective joy and concrete wins at the same time. There is a genuine feeling among our campaign that we will win, and that it will spur us on to many more victories in the future — around things like tutor pay and unpaid labour.”

Grad student organising has brought incredible energy to many UCU branches in recent years, with campaigns tackling the issue of casualisation and poverty pay as well as poor working conditions springing up in many places. Although ‘Where’s Our Space’ is a broad campaign involving grad students both inside and outside UCU, Lukas told us that experiences on the picket lines helped push forward student organising around the issue:

Several of us were part of the UCU strike, and the conversations we had on the picket lines with more senior staff were really encouraging for building the campaign. All the issues we are facing are of course connected — from lack of work and community space to poor pay for hourly-paid teaching staff. It is a sign of the never-ending forward march of precarity and neoliberalisation of the university.

In our UCU postgrad network we have discussed the importance of lowering the barriers of entry into the union for young researchers. There is a danger that the union might be perceived as only for senior academics, while in reality it is us young researchers who are the most precarious and the most vulnerable to pension cuts. There are three crucial lessons to learn from this, in my view: One, to create exciting, effective, and mass-based campaigns for early career researchers. Second, to link our struggles beyond the union into student struggles — the undergraduate students have a lot of concerns that align well with ours. And third, to link up local, regional, and national campaigns. In our Where’s Our Space campaign, we have received countless messages of solidarity from across Britain and proposals from campaigns across many universities to join forces, collaborate, and coordinate. This will be a crucial feature of winning our struggles in the future.”

As UCU Scotland President I send solidarity from UCU members throughout Scotland. Our eight days of strike over casualisation is part of the protest of PhD students and tutors to have decent working conditions. Irrespective of where we are within Higher Education we have a common goal of protecting education from those who treat it solely as a market for exploitation and personal enrichment. We stand with undergraduates, postgraduates and all those working in the sector to defend a collective, unified education sector.”

Send messages of support for the ‘Where’s Our Space?’ campaign on the Twitter hashtags #phdprecarity and #wheresourspace or email wheresourspace@gmail.com