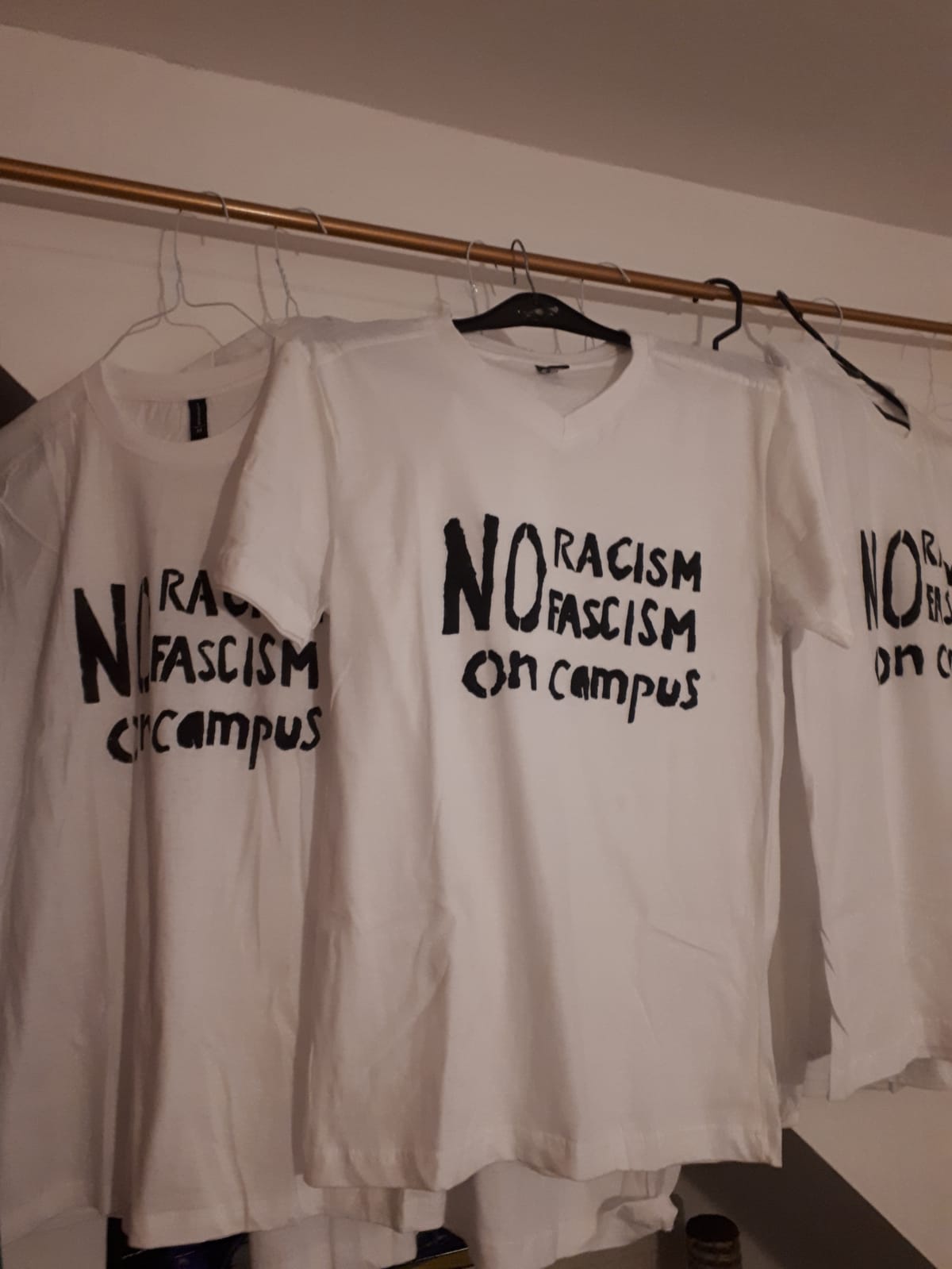 UCU at Capital City College Group (CCCG) in London have just agreed a pay deal worth 5%. 1,700 staff (Business Support as well as teaching staff) will get the pay rise backdated to September and it will be in their Christmas pay packets. The deal is worth £2,000 a year and up to £140 take home per month.

When we first met the CEO, at the outset of our strike action before the summer, he made it clear to UCU officers that there was ‘no money for a pay award above the AoC’s recommendation of 1% and fractionalisation was not a priority for the college.’

In the end the pay deal was one part of a wider package that was agreed including a fractionalisation agreement (see box for details).

Below is an account of how UCU members at CCCG achieved this landmark deal.

Whilst pay and fractionalisation were the issues that members took action over, the anger at the group ran much deeper. Just over two years ago City and Islington College and Westminster Kingsway College merged (College of North East London joined the group a year and half later). UCU across both colleges vigorously campaigned against the merger. We did so on the basis that the merger would lead to rationalisation of resources, a narrower educational offer and make the colleges more remote from the communities they were supposed to serve.

It was argued by the college management and the governors that merger would create a more collaborative model with less competition. UCU argued that mergers, which were taking place across the capital, would lead to more competition not less. Rather than 40 Colleges competing with each other, 6 super groups would now battle it out for students and funding across the capital leading to an intensification of competition.

UCU were proven correct. Whilst we did not stop the merger we did manage to launch a high profile campaign that involved producing alternatives to merger and a mass petition campaign. The vast majority of UCU members and business support staff were opposed to the merger.

Life under merger for students and staff got worse. IT systems failed leading to increased stress in the class room, MIS systems did not function and a ‘stack ’em high sell ’em cheap’ ethos became prevalent.

It was the resulting anger towards a top down management style combined with a ‘measure everything that moves culture’ that created great anger amongst staff at CCCG. It was this anger that fed into the campaign for fair pay and fractionalisation.

The campaign: ‘the money is there we want our share’

Whilst opposing the merger we recognised that bringing together two big and relatively financially robust colleges could make our case for fractionalisation and fair pay even stronger.

Officers understood that if the campaign was to be a success we needed to convince our members that not only could the college afford our demands but in fact not doing so would have a detrimental effect on the teaching and learning within the group.

Secondly, we made the economic case that the money was there to fund our claim. CCCG has a £110m turnover with £36m in reserves. We produced posters with some basic facts: four individuals earned £800,000 between them when it would only cost £1m to fund a 3% pay award to all teaching staff. We publicised the CEO’s pay of £210,000 and the fact that £89,000 in bonuses had been given out to key management personnel in the first year of merger.

The point being made by UCU was simple. Merger had been successful for a small minority, but for the vast majority merger had meant, a cut in wages, an increase in workload and the loss of jobs.

What also helped to build the confidence of membership was the power we had gained by becoming one entity. We now had 500 UCU members organised across 11 different sites that stretched from Enfield in the north through to Soho in central London and Victoria in the South and since the beginning of the campaign the union membership has grown to 612 members – a growth of 22%.

Management attempted to divert our campaign by putting the blame on government. We responded by arguing that whilst we recognised the role of government in slashing FE funding, the money was there at a local level to fund our claim. We made clear that it was UCU’s members who had campaigned for more funding for FE through taking strike action, which on too many occasions, was not supported by college leaders.

We also made it clear that we would work with anyone to get more funds for FE. We argued that this would be easier if the college funded our claim first, allowing us to then go to the government demanding that they pick up the bill.

Officers, understood that while one day strikes play a role and have helped to achieve some gains, they were not going to be enough to win this battle. From the beginning, officers across the group made it clear to members that it would take sustained action to win our demands.

We stretched our 8 days of strike action over two months and lined up our last phase of action to hit GCSE exams in June. Despite attempts by management to make staff feel guilty for striking on exam days, the strike held firm because we had convinced members that it was the government and management that had put students’ learning experience in jeopardy not their action demanding funding for pay and fractionalisation.

We kept up the pressure directly on the governors and CEO through a mass petition of no- confidence in the CEO and two very noisy and extremely effective lobbies of the governors’ meetings.

The CEO ‘retired’ and a new CEO was appointed. Just before we were about to take three more days of action hitting more GCSE exams, management made an offer on fractionalisation, a one-off bonus payment, no deductions for two days of the strike action (see box for details of offer) and an offer of negotiations with the new CEO in the new year on a local pay deal. UCU agreed to suspend action on this basis.

In September 2018 UCU entered negotiations with a new CEO. We started the negotiations making it clear that there could be no quid pro quo, we would not sell the furniture for a pay rise. We would not enter negotiations on anything but pay.

The idea of a three year pay deal was replaced primarily because the governors were not totally convinced that the CEO could deliver his funding model. Instead the College has an ‘ambition’ to pay a 3% award + inflation for the next two years.

The new CEO at CCCG brought in a new and exciting approach to the group and listened positively to UCU’s arguments calling for a change in direction.

His approach was not one that started with the usual threat of higher pay will cost jobs. In fact, his starting point is that without having decent pay, and a more equal pay structure, the college will not be able to achieve the excellence that we all strive for in education. His argument, and one that UCU has been campaigning for, is that we can’t keep putting forward models that look for longer teaching weeks and more hours teaching per week to fund an award (a model that one of the principals put forward and UCU rejected out of hand).

Rather than blaming pay roll costs as the cause of college finance problems, colleges should look at how the other 35% of their funding is being used. It is clear at CCCG millions have been squandered on IT and MIS systems that don’t work, on over lavish central management structures and the fool’s gold of extensive outsourcing and the use of expensive agency staff and consultants.

It is these areas that will be looked at to help fund the college staff pay rise. A process of bringing all outsourced work back in house will now take place. Rather than deploying an estates strategy that looks to raise funds by selling off buildings, a strategy based on introducing innovative new models by using our estates to raise revenue will be deployed.

The funding of the 5% pay award would initially come from the reserves. This was something that UCU campaigned for and had been told by previous CEO/Principals that ‘colleges could not use reserves to fund pay rises’.

The only concern UCU had was over the proposal that fifty jobs go through natural wastage over three years. Whilst this number is relatively small over a three-year period (around six posts per college per year) we were concerned that this would lead to an increase in workload for our members. Management agreed that these would not be ‘frontline staff (lecturers or Business support)’ and that UCU will monitor with HR the posts to go through natural wastage. With this agreement, and an understanding that these jobs would go anyway, UCU agreed to this.

The CEO made an offer of 4% at the last negotiating meeting but UCU negotiators argued that while this was a significant step forward it still would mean that our members had not caught up on the years of pay cuts. UCU put forward the idea that the pay award should be graduated: those under £55k to get 5% those between £56k and £76k 3% and those earning over £76k to receive no award.

The CEO also made an important gesture to rebalancing the college pay structure by waiving his right to a bonus and has taken a 5% pay cut and is looking to a further 5% cut in September.

Our claim was for: a 3% + 3% (inflation) = 6% pay claim and to fractionalisation of all Hourly Paid Lecturers (HPLs) who had been working for the group for three years or more for 12 hours or more per week.

What did our campaign achieve?

Significance and lessons of dispute: