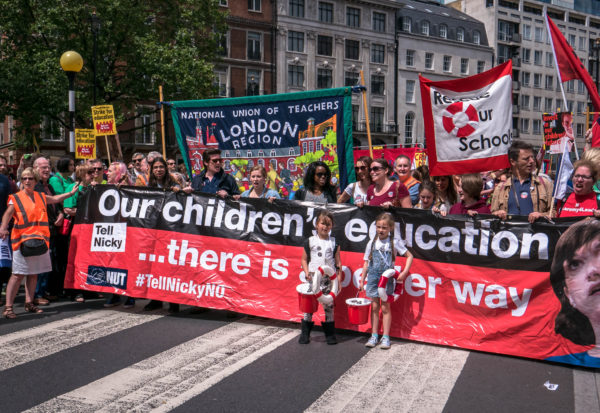 What a magnificent response to the Tory government’s attack on education!

Yesterday’s NUT strike, involving hundreds of thousands of teachers, was an inspirational day of action. UCU members in thirty-three universities, nearly a quarter of all universities, helped make this day an even more important one by taking strike action alongside the teachers.

The reports are still coming in. 10,000 marched in London, 3,000 in Bristol, 750 in Manchester and Birmingham, over 1500 in Brighton, up to 500 in Lancaster, 300 in Cambridge, and there were other big marches and rallies elsewhere. The NUT has also reported that since the strike action was announced the union has recruited over 6,000 new members.

I attended the London demonstration. The demonstrators were young, angry, diverse and determined. There were many funny moments, too. As one of the capital’s many homeless men walked past the demo, slightly worse off after a few drinks, he shouted at the demo, ‘Hey teacher’. Hundreds of teachers on my part of the demo all turned at the same time and spontaneously responded by singing, ‘leave those kids alone’!

On another part of the demo the Iceland football supporters’ chant, the slow build-up of ‘hoo’, was given a go too. It had even more of a threatening tone to it when chanted on a demo against cuts.

A symbolic moment for me came when a man driving a white van, with cropped hair and a flag of St George displayed in the back of his cabin leant out of his window and cheered and beeped his horn in support of the striking teachers as he slowly drove past the demo.

When the thousands of teachers marched into Parliament Square they listened and applauded the speeches enthusiastically. The biggest rounds of applause came at three moments. The first was when a junior doctor announced the result from their ballot – a 2:1 rejection of the government’s offer. The second was when Kevin Courtney, acting NUT General Secretary, argued that it was not immigrant children who were to blame for rising class sizes but government cuts in funding. The third was when John McDonnell announced that Jeremy Corbyn would not be resigning.

The teachers’ strike was over workload and funding, but is part of a dispute sited in the wider defence of education. Coming only a week and half after the Brexit vote the strike took on even more significance . The battle we have all been in since the vote was announced has been to try and ensure that our world is united and not divided by racial hatred, as well as to prepare the working class movement to fight further attacks on our services and communities.

It is very strange indeed to live in a society where all the main political parties are leaderless. The Tories are in a vicious leadership contest. Jeremy Corbyn is under immense pressure from Labour MPs to resign, the Greens are holding their own leadership contest and Farage has resigned as the leader of UKIP. Only the Liberal Democratic Party are not having a contest – but who cares….

What yesterday’s teachers’ strike showed is that there is not a crisis within the movement – we are united. The crisis is at the top of society, where there is a profound crisis of leadership.

It is in these moments in history, when the official leadership of a country is in disarray, that new spaces for real bottom-up forms of democracy, rooted in our workplaces and communities, can begin to develop.

This is why it is important that we do all we can to ensure that Jeremy Corbyn is not defeated in his battle to remain the leader of the Labour Party. His leadership symbolises for millions of working people the desire to take back control of their lives.

We need to build a movement to defend education from the cradle to the grave. 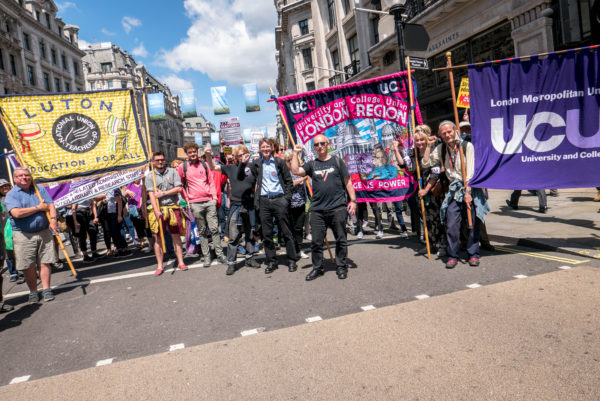 Yesterday was an excellent start to building this movement.

NUT General Secretary Kevin Courtney made it clear to his members that more action will be necessary if they are to be successful.

Mark Campbell, Chair of London Metropolitan University UCU, got an enthusiastic response for calling for more coordinated action in the Autumn term. There is now a real possibility of coordinated strike action between junior doctors, teachers and university lecturers.

Yesterday the NUS and UCU called a national demonstration for Saturday 12th November. We need to make sure that hundreds of thousands turn out for this.

The first step to building for the action in the Autumn will be the People’s Assembly and Stand up to Racism national march in London on Saturday 16th July. The theme for this demo is ‘No to austerity – No to racism’.

There have been arguments, understandably, both within our own union, and within the NUT, about whether it was wise to take strike action when the country is in a political and economic crisis.

Yesterday’s strike was a clear illustration of why it was precisely the right thing to do. It demonstrated that there is a deep desire for unity within the working class and organised labour movement. It was an important first step to shaping the post-Brexit world in favour of working people.

To continue what the teachers have begun will take great determination and effort. But when did that ever stop us?