It is time to get organised to win the industrial action ballot:

Why we need to fight

As we begin our ballot, the Government is weak, split and under attack from all sides.

David Cameron is floundering under allegations about his family’s tax avoidance schemes, Iain Duncan-Smith has resigned and the government has totally failed to respond to the steel crisis.

They face an industrial challenge from junior doctors over new contracts, and from our sister union, the NUT, over forced academies.

Our employers use the Government ‘austerity’ pay freeze to justify holding down our pay. Division at the top increases our chances of success. Opposition from below offers us opportunity for joint action.

Compared to what our salaries were worth in 2009, our pay has fallen by 14.5% in real terms. If we do not take action it will continue to decline.

From April, all members of USS will pay more and get a ‘career average revalued earnings’ (CARE) scheme. Members of the old Final Salary scheme will pay an additional 0.5% of pre-tax salary in contributions. Members of the old CARE scheme pay an additional 1.5%. TPS members were hit by big increases a year ago. Also from April, our National Insurance payments (NICs) increased – from 10.6% from 12%.

At the same time the value of our pensions (which is ‘deferred pay’), has been reduced. The only way we can make up the difference is if our salary increases. We need a pay increase or 2-3% (or, for some TPS members, a lot more) just to stand still!

The employers have offered us a grand total of 1% – a pay cut of between 1% and 4% depending on personal circumstances – before taking into account inflation, which will devalue it even further. Housing and travel costs are still going up, even if headline inflation is low.

The employers can afford to pay more. The Guardian recently exposed the fact that the HE employers are sitting on a £1.8bn surplus as a result of tuition fees. Indeed, whereas much of the public sector is being starved of cash by a Tory Austerity Government, Universities are not poor. Instead they are siphoning funds into speculative capital projects and increasing their reserves with annual surpluses. 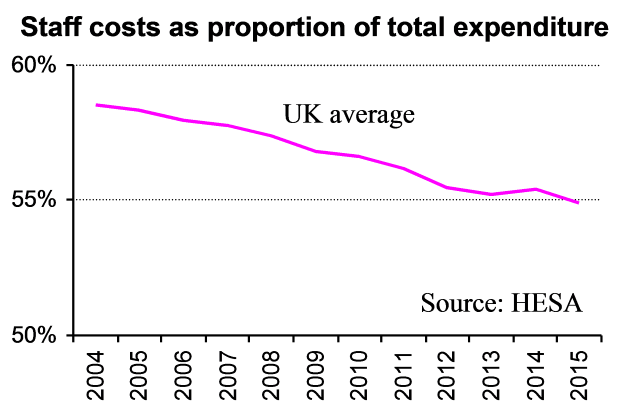 We face a group of intransigent employers who see systematically reducing expenditure on salaries (i.e., paying staff less) as a key strategic aim.

In the 1970s, around 70% of Universities’ total expenditure was spent on pay. Now the UK average is a shocking 55%.

Since 2008 the employers have complained that staff costs are going up. They even say that staff are not losing out from pay cuts because of pay progression (this is of course nonsense if you think about it).

This is untrue. The trend is downward, as the graph shows. Employers are spending less and less on their staff every year. (Indeed, privately, they even boast about this in their accounts.)

Far from staff becoming an expensive burden, the opposite is true. More and more of Universities’ expenditure is going in other directions – new buildings, new campuses, contractors paid out of capital budgets, and other dodgy practices.

Students are paying more for their education than ever before. But that money is not going to pay staff.

The joint trade union claim figure is for a modest 5%. A 5% increase would offset our losses from pension contributions and arrest the long-term decline in the value of our pay.

The employers have offered us a mere 1%. However, the fact that they started with 1% rather than a lower offer as in previous years shows that they are worried about us taking action. Indeed, institutions are internally budgeting for 2%, as anyone who has submitted a research grant recently would tell you.

What else are we fighting for?

Our demands are living wage and minimum rates of pay for all roles, including academic ones, action to close the gender pay gap by 2020, and nationally agreed action to reduce the proportion of staff on casual and zero-hours contracts (and to ensure that these staff are paid the same rates as permanent staff).

The pay of UCU members in HE varies greatly. Some members, particularly those on casualised contracts of different types, are extremely low paid. There are still significant gender and race pay gaps, some of which are tied to casualisation (i.e. that women tend to get more insecure jobs).

Do all staff need a pay rise?

Some colleagues may think they are personally well-paid. What do we say to them?

Some staff, particularly older staff, are on higher salaries. However, if you are significantly better paid than more junior staff then sooner or later the University will come looking to make you redundant! The graph above is the result of years of holding down pay and downgrading the profession. Thus many professors at University College London are finding themselves targeted for so-called ‘voluntary’ severance. If they leave, they are replaced with junior lecturers and teaching fellows on a third to half their salary. The bigger the gap, the bigger the incentive for management to pressure senior staff into retiring early.

In particularly impoverished areas of Britain, having a university job is relatively well-paid compared to other jobs available locally. But exactly the same squeeze is taking place in those institutions as elsewhere. It does not benefit the low paid in the region for university staff to accept a pay cut! The employers just pocket the difference. Lower paid staff in a local University means less money circulating in the local economy.

More generally, as the graph shows, if we don’t fight over pay, the employers get away with paying less overall, and take our ‘generosity’ for granted. The rate for the job falls and all staff lose out. If we do fight, we can raise everyone’s salaries, including the lowest paid.

A fight for the future

There is widespread resistance to the Tory Government’s ‘Austerity’ programme. Public pressure and campaigning by groups like Disabled People Against Cuts prevented the cuts to disability benefits. FE lecturers in Scotland won a significant victory after only a few days of industrial action.

There is huge support for the junior doctors. We need to relate to this growing sense of anger at the injustice of pay cuts and austerity. The junior doctors’ and teachers’ disputes in England, and the FE lecturers’ victory in Scotland, shows that there is support for a well-funded public sector.

We have an opportunity to join with doctors and teachers for a broad campaign in defence of pay and the public sector. Our case for a pay increase in HE is obvioiusly connected to the wider question of who should pay for austerity – tax dodging corporations, politicians and bankers – or the majority of the population compelled to work for a living.

We are the custodians for Higher Education for future generations. Fighting over pay means defending realistic job prospects for the next generation, one already burdened with student debt. Many of our students are our future colleagues. If we stand up and fight over pay we will be a force to be reckoned with over the Tories’ Green Paper and their forthcoming White Paper and HE Bill.

We are fighting on pay, casualisation and equality. We are also fighting to defend and improve Higher Education in the interests of everyone in society. We need to make this argument publicly and confidently.

We can fight and win. To do so we need to organise. The first step is to Get the Vote Out.