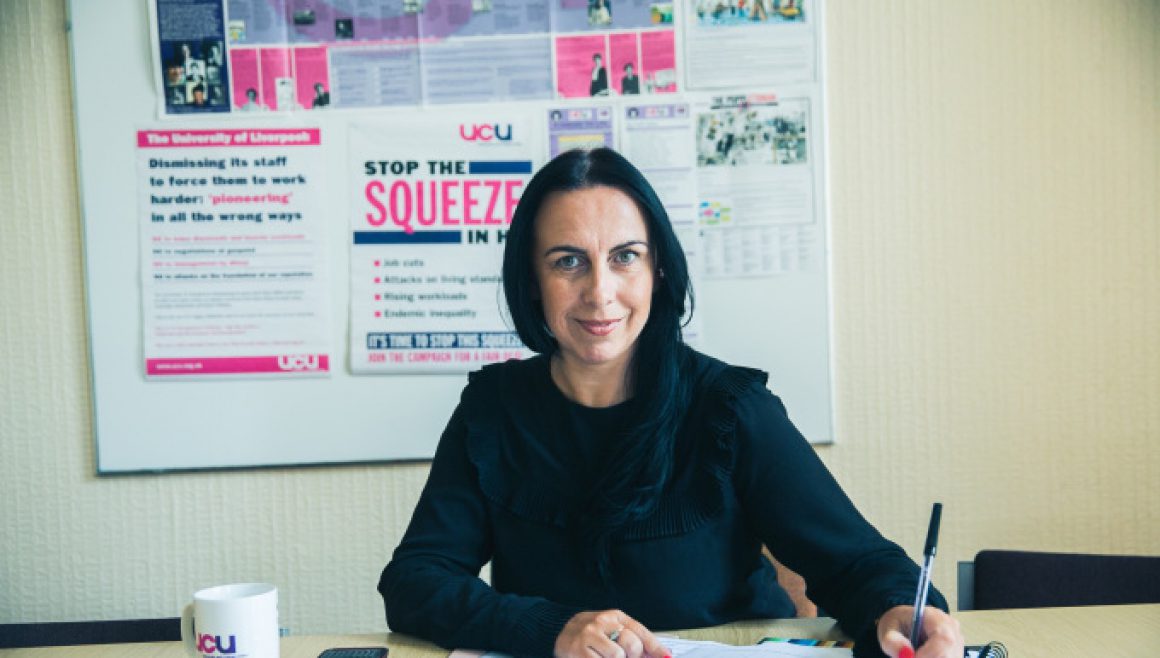 Collect signatures to support Jo’s nomination in standing for general secretary.
The signature sheets can be downloaded at UCU website here: https://www.ucu.org.uk/media/10168/General-secretary-election-2019-nomination-form/pdf/Gensecnominationform.pdf
The completed signature sheets need to be sent to Jo at her home address this week so she can then forward them to UCU HQ before April 8th.
The deadline for posting nominations to Jo is THIS FRIDAY 29th MARCH.
Please email Jo at j.mcneill@liverpool.ac.uk for her home address.

It is clear that the post-sixteen education sector faces enormous challenges. In Further, Adult and Prison Education we face the consequences of budgets that have been cut by 40% in the last five years. In Higher Education we face the rampant increase of marketisation, cuts in pay and pensions, job losses and our professional autonomy under attack.

It will take more campaigns like the one we participated in over USS and the one we are seeing at the moment in FE, if we are to be able turn back the tide of regressive education policies and funding deficits.

I believe we can do this. But it will take a leadership that understands industrial tactics and not only supports effective action but one that that is prepared to see these fights through to victory.

This is why I will be putting myself forward for the position of General Secretary of UCU.

We need a genuine grassroots candidate who is not tainted by the mistakes of the past. I ran against Sally Hunt two years ago and won 41% of the vote, I ran on a platform of change and that change is now needed more than ever. With one current paid official already standing, we now need a candidate who is not disconnected from our membership, will always be accountable to members and someone who will step up and transform UCU.

Finally, I would like to thank all those who voted for me in the VP election. The combined vote for the left was 64%. A united campaign around one left candidate would have a good chance of success in this new election. I believe I am that candidate.

My name is Jo McNeill, and I am standing as a candidate for UCU General Secretary.

I stood for General Secretary against Sally Hunt as a rank-and-file candidate, calling for a change of direction, and received 41% of the votes.

I am an ordinary member of our trade union. I have worked in our sector for most of my adult life, and joined UCU as soon as I was eligible. FE and the University of Liverpool gave me a second chance. I have been working in Higher Education in Widening Participation and Fair Access since my MA. I am currently UCU Branch President at the University of Liverpool and in my fifth year on NEC.

I am an activist: I want our union to stand up for ordinary members, something I do each day, every day.

In that election the vote went three ways. It is testament to the non-sectarian nature of my support that the majority of my supporters voted for the other left candidate, Vicky Blake second, and it was my second preference votes which ensured that she won.

This is an introduction to my campaign. All members will receive a copy of my full election address with your ballot paper in April. Between now and then I will circulate a series of blog posts addressing issues our members are facing. These will be tweeted out, shared on my facebook page and emailed to branches.

To get going, I have put a short analyis and explanation of why I am standing on this blog.

If you are interested in what I have to say, ask your branch officers to share my posts with you or contact me direct on: j.mcneill@liverpool.ac.uk

Turnout in the last election was under 13%. It’s vital that you let your voice be heard, whichever way you decide to vote.

You can keep up to date with my blog: jomcneillucu.wordpress.com