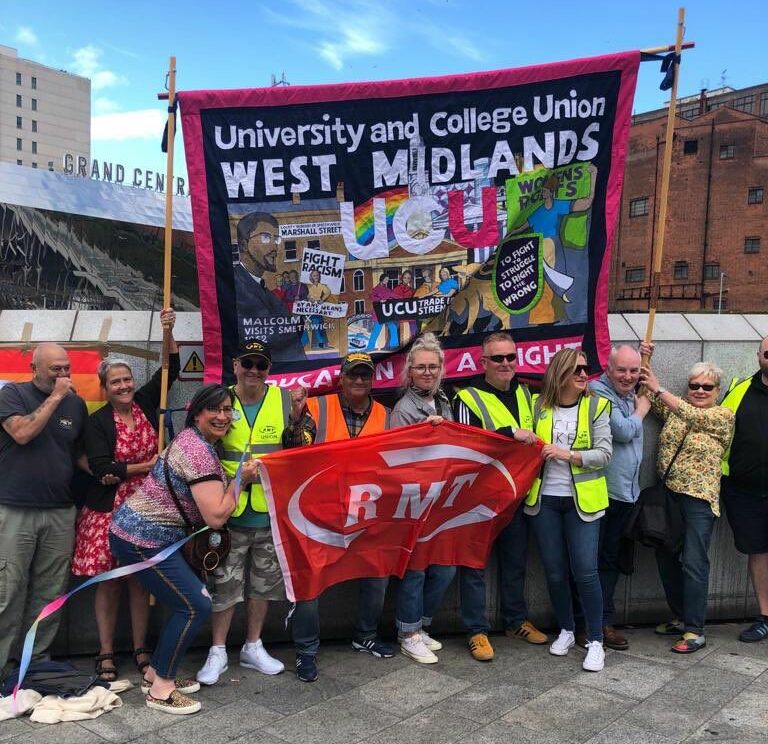 In the wake of three days of national rail strikes, Higher Education delegates met on Monday to discuss next steps in the UCU’s Four Fights and USS disputes. The Branch Delegate Meeting was set up in such a way as to provide the grounds to avoid initiating the summer ballots that our recent Sector Conference had called for, and to delay or even avoid the involvement of UCU’s HE membership in the growing industrial challenge to the Tories over the cost of living crisis.

We were offered a series of hollow excuses as to why the ballots had not been authorised by HE Officers already. We were told that it was more democratic to wait for a full HEC which could be preceded by a BDM than for the officers’ group to make the decisions.

The problem with this argument is that there was no decision to be made by HEC. Conference is the sovereign decision-making body and all that is required from HE Officers is for those decisions to be implemented. And there is nothing democratic about a BDM at which delegates are invited to overturn democratic decisions made only three weeks ago. Unlike at Congress and Conference, branches had no say in the questions which were voted on at the BDM, one of which was the General Secretary’s ‘pause and reflect’ strategy which had already been rejected by three recent Sector Conferences.

Perhaps the worst argument was the claim that branches themselves often regret decisions made at Conferences and seek to overturn them. The last BDM, when the ‘threshold branches’ were asked if they really wanted the ten days of strike action passed at the April SHESCs, was cited as an example. This amounted to justifying undemocratic behaviour by pointing to a previous instance of the same offence. That BDM resulted in the fracturing of the disputes and left branches with a mandate no choice but to try and win local gains from the marking and assessment boycott.

It was claimed that motion HE6 called for summer ballots on the existing terms of the disputes, which legal advice had identified as a problem. But not only did HE6 stipulate no such thing, no details of the legal advice were divulged.

Despite all these manoeuvrings, many delegates expressed their frustration with the way that these disputes have again been handled. The delegate from Wolverhampton argued powerfully that delaying UK-wide action meant abandoning branches currently facing mass job losses and course closures to their fate. Many branches refused to put the questions from HQ to members either because they objected to their undemocratic implications or because there wasn’t time to do so. The contributions from branches expressed a range of responses to the questions obtained through a wide variety of mechanisms. Nevertheless, UCU’s bureaucracy hopes that this will give HEC enough leeway to be able to justify overturning Conference policy.

To cap it all, when it came to the votes, there was no option to abstain, so delegates with a mandate to refuse to answer the questions on democratic grounds were denied the ability to do so. Instead, they were advised to email UCU HQ!

Despite the unforgivable delay, it is still possible to run long ballots over the summer which would allow branches to take action during induction weeks or at least early in the autumn term. The case for a summer ballot has got stronger since Congress. Not only have the RMT strikes transformed the public conversation about the ability of workers to challenge the Johnson government, but other groups of workers have either already won industrial action ballots or are preparing to run them. Airline baggage handlers will take action soon, post and telecom workers will start receiving ballot papers this week, while even criminal barristers are taking strike action.

Crucially, our HE colleagues in Unison are balloting now over the 2022-23 pay claim. June’s Sector Conference also passed a motion calling for better coordination with the other campus unions. Do we really want to be finding ourselves crossing Unison picket lines in the autumn because we have not balloted in time to join them? Joint action with our colleagues in other unions is the way we improve our leverage over the employers.

We do not have the luxury of delay. Record inflation of 10%+ is eroding our pay now, hitting our lowest paid, casualised, Black and women members hardest. Talk of waiting until our membership density has improved is nothing more than evasion. Other unions are fighting now. We need to join the fray.