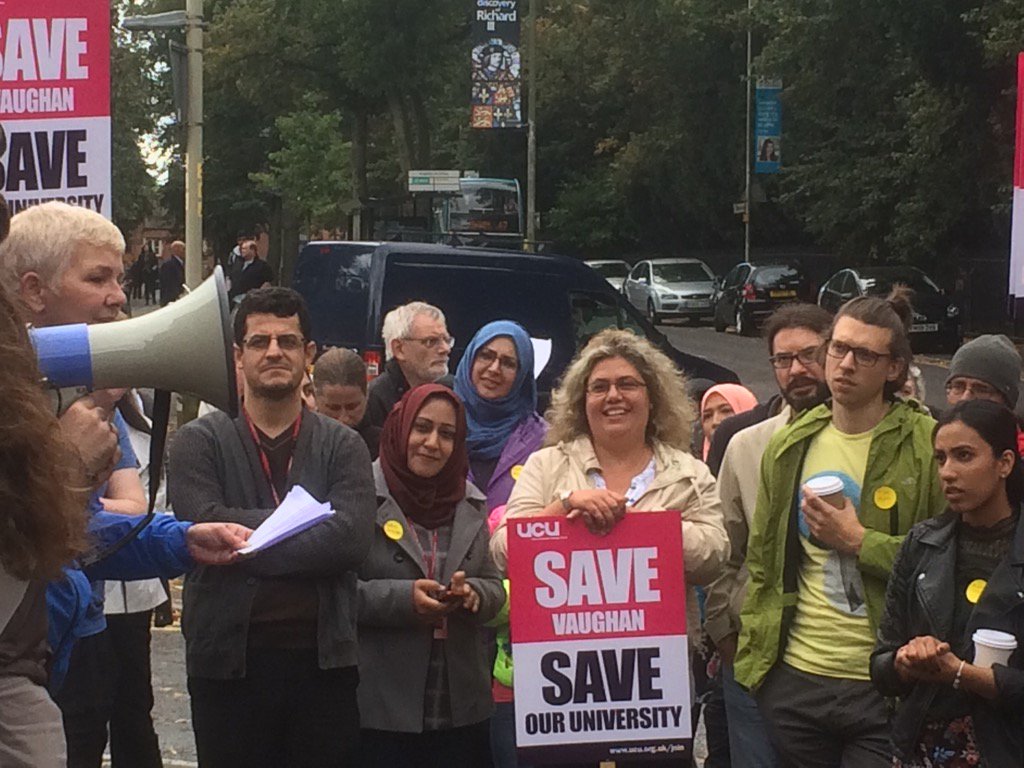 UCU at University of Leicester declared an official dispute with the university leadership team on 31 July over the threat of compulsory redundancies. In April the VC stated that the university wished to make 150 staff redundant (10% of staff costs). Staff were told that job cuts and closures had to happen quickly because of a looming financial crisis.

University Council confirmed they plan to close the Vaughan Centre for Lifelong Learning on September 16, despite a campaign against the closure which was widely supported by students, the local community and by Jon Ashworth, MP and the Leicester council. Student recruitment at the centre was halted before the university started its ‘consultation’ period with staff.

There are threatened closures that will result in hefty job losses in Criminology, Physics and Astronomy, and Natural Sciences. In the Mathematics department, all 15 academics on teaching and research contracts have to reapply for their jobs. All areas of the university are under threat and, despite over 90 staff leaving voluntarily under VSS, LUCU know the figure of overall job losses will be much higher than the 150 the university claims will be shed.

Leicester UCU have carried out an alternative financial analysis that shows the financial crisis – which the university leadership team is using to justify these redundancies – is manufactured. VC, Paul Boyle has made his affiliations clear, awarding an honorary degree to David Willetts earlier this year and sponsoring Leicester Mercury Business Executive of the Year Awards, where Mark Thatcher was the invited speaker.

LUCU have told the university leadership team that if it removes the threat of compulsory redundancies and stops forcing academics to reapply for their jobs then the union is willing to talk with them about a plan for institutional change that would enjoy the support of staff and students alike.

Unless these threats are withdrawn, LUCU will begin an indicative ballot of members for industrial action. The branch will also potentially call for a global boycott of the university by ‘grey-listing’ Leicester. LUCU members are currently organising on a department-by-department level to run a campaigns against job losses and closures among peers, students and supporters.

Branches and members who want to support colleagues at Leicester can send messages of support to: ucu@leicester.ac.uk

Sign the petition ‘No Redundancies, No Confidence’, which currently has over 3,000 signatures: Click here for LUCU petition.