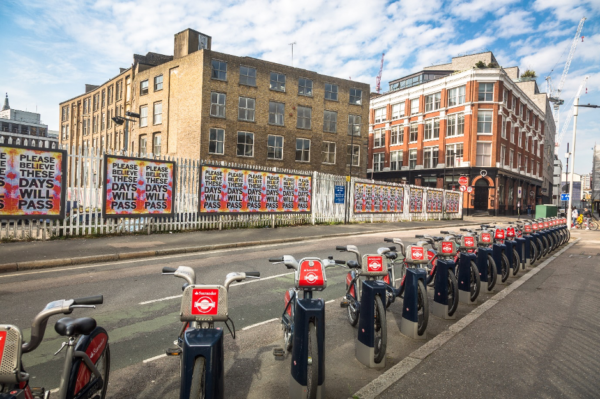 London is a pretty scary place to be at the moment as the death toll in the capital, like New York, continues to climb.  My daily exercise takes me through some of the richest real-estate on the planet. As I walk through the city of London towards the Thames, I pass the Cathedrals of Capitalism: gargantuan financial institutions that have sprung up in the last thirty years; glass and metal edifices that tower over the London cityscape.  The bars surrounding them, which would normally be thronging with suited, confident and very wealthy young men (and some women), are now silent.

As I continue to meander through the deserted city streets towards the Thames, the only people I see are the homeless and the Deliveroo bike riders. On one of my walks in the early weeks of the lockdown, I saw a young man ready to jump from one of London’s bridges in a suicide attempt. A passer-by was calmly talking to him in an effort to deter him, as the emergency services arrived.

Four weeks into the lockdown and there is growing concern about the way Johnson and the government have handled the Coronavirus crisis. As the death toll reaches the 12,000-mark, hospital workers and social care providers still do not have the PPE they need. Testing is still nowhere near what is needed to ‘search and destroy’ the virus.

It is a scandal that the government have airbrushed the deaths of the elderly who are in care out of the official figures.

The government are still, in reality following their original disastrous ‘herd immunity’ approach. Boris Johnson was forced into the lockdown as he has been forced into the minimal testing programme.

The consequences of this flawed strategy are that poor working-class people from BAME backgrounds are three times more likely to be hospitalised than white people.

In the US, where Trump is following the same strategy, black and Latino people in New York City are dying at twice the rate of white people, according to preliminary data released on Wednesday by the city.

But is this just sheer incompetency on behalf, of the government or does their negligence reflect a more systemic failure?

Last week the media gave a lot of column inches and air time to an article that appeared in the Lancet written by scientists from UCL about how school closures make no real difference to containing the spread of the virus. The article was quite rightly rebutted by scientists from Imperial College who argued that the research takes the school closure programme in isolation from the rest of the strategy.

The argument though is not really about the science. It is pretty obvious to most that reopening places of mass gatherings like schools, colleges, and universities would only increase the spread of the virus.  The attention given to this article reflects a bigger and more central concern of the establishment – the collapse of the economy.

There is a battle taking place in Britain – lives versus profit. This battle is mirrored in the tensions between Rishi Sunak and Matt Hancock. Big business is applying pressure on government to bring the lockdown to an end as soon as possible. The truly scary Home Secretary, Priti Patel, used her first appearance at the daily briefing to exploit fears for children’s safety. But her message about a rise in online child sexual abuse was little more than a piece of back-to-work propaganda dressed up as child protection.

It is quite clear that the government thought their slogan of, ‘Stay home, protect the NHS, save lives’ would not apply to most workers, who would instead continue to work. That is clearly what was intended by the government’s refusal to shut down many non-essential workplaces such as construction sites and has been reinforced by Johnson’s daily dose of Churchillian style rhetoric.

But this is not what has happened. Workers have fought to stay at home.

They have understood from all that they had been told about the virus that the key is self-isolation and have understood the importance of social distancing which is impossible in many workplaces. In many colleges, schools and universities it the collective power of workers that have forced these and other institutions to close, and we will have to use this power again to keep us all safe.

We owe nothing. They owe everything…

As the crisis continues some companies will continue to make profits out of the crisis.

As the body count rises, others are working out ways to protect their markets and bottom lines.  Marx and Engels in 1848, writing in the Communist Manifesto, explained the contradiction that lay at the heart of capitalism.  They praise capitalism for being the most advanced mode of production in history. For the first time humans had arrived at away of organising society that had the potential to rid it of disease, poverty and to provide for everyone’s needs.

They explained, however, because of the way that capitalist society was divided into classes where a very small minority owned the means of production who accumulated to compete, the potential of capitalism could never be realised. They explained that the social relations of society become a fetter for the further development of that society.

Capitalism can spend billions on weapons but millions of people live in overcrowded conditions or have no home at all. Capitalism has created the ability to produce enough food to feed everyone on the planet and the ability to transport it to anywhere in the world within hours. But, according to the World Health Organisation, every hour of every day, 300 children die because of malnutrition. It’s an underlying cause of more than a third of children’s deaths – 2.6 million every year.

The coronavirus is not just killing us but it’s destroying the economy too. The government have had to act to save capitalism – to keep it alive. They have spent billions on ensuring that it survives so that the system can get back to business as usual.

The Office for Budget Responsibility predicts that the economy could contract by 35% with unemployment rising up to two million. The government and the employers are already warning us that we will have to pay the price for such huge borrowing commitments by government.

But why should we?  We owe nothing. It is working people that have saved millions of lives and have got round every obstacle that government have placed in front of them. In fact, the bankers, financiers and government owe us for keeping them alive. Why should we be the ones that have to pay through losing our livelihoods?

There is no reason why the banks could not write off all the debt owed by government and by working people.

Rather than a state intervention to keep capitalism and its priorities alive we should be demanding that we want intervention to completely re-model our society from the bottom up.  The driver of this new model should be working people’s needs rather than maintaining an already fabulously wealthy minority’s profit.

‘All that is solid melts into air’

So wrote Marx and Engels so poetically in the Communist Manifesto.  They were referring to how in the midst of the industrial revolution all the old certainties, values and morals simply vanished. New ones were brought in to reinforce the new ways of producing and working.

With the outbreak of COVID-19 a magic money tree has been found. The rail system can be nationalised, privatised companies can’t run our NHS and care services effectively. Performance measurement, league tables and exams can be abolished and the sky does not fall in. And factories can be re-tooled overnight to produce usefully necessary products that keep people alive, like ventilators, rather than products that kill.

Workers have always dreamed of an alternative world to the one that brought us to where we are today. I recently attended a film premier of a new documentary about a group of workers in the 1970s working for Aerospace who drew up a radical plan of what their skills could be used for. It became known as the Lucas Plan. Unfortunately, their vision was never realised but it showed what an alternative could look like

For many people the attempt by government to shore up the system has begun to bring in focus a different vision of what society’s priorities should be and a model that puts our needs over their profits.

It has become painfully clear to many that the government, the hedge fund managers, the bankers and the CEOs are not the ones that are vital to keeping us and our families alive. The pioneers of this new model are already in waiting; the bus drivers, the health workers, the teachers, the shop workers, the refuse workers and the constructions workers to name but a few – in short, the key workers. The people who have always ensured that society functions but now they have awoken to the power they have.

No return to the past

First It was the fear of revolt by working people as they made clear that they were not going back to the poverty and squalor of the 1930s after the sacrifices they made in the war which brought change. As Quintin Hogg, a Tory minister famously told government at the time, ‘give the people reform or they will give you social revolution’.

The second outcome was that the first opportunity the working class were given they unceremoniously kicked out of office the ‘hero’ of the hour, Churchill and instead elected a Labour Government by a landslide.

Yes, it could even mean the truly uninspiring and dreadful Sir Keir could get swept into office on the backs of working people’s rage and fear of going back to the dark days of austerity.

Also, like workers during the Second World War they are having to be resourceful to survive and have to rely on their own collectivity and solidarity to survive. As we have seen throughout history, even in the most difficult of situations workers have always found ways to fight back.

Many of our trade union leaders, predictably, have lagged behind this mood of defiance. Relying on Tory trade union laws and bureaucracy as an excuse not to generalise these instances of revolt, their first instinct is to repudiate those taking this action.

As some of our leaders clamour to be a part of Johnson’s national campaign they have left the door open for employers to go on the offensive at a local level, leaving workers unprotected and dying. UCU must ensure that it is fully behind the growing movement of twining and solidarity with hospitals to campaign for PPE.

We need to challenge our own employers who are using the crisis as an excuse and opportunity to push through their own agendas. The managerialism, the petty rules, the limited ambitions of the education policy makers have all been brought into sharp focus during this crisis. We must demand whilst we are working from home that we do so through our good will and must not to be forced to work as if we are in normal times. No one on a casualised contract must lose their jobs.

UCU must oppose any re-opening of colleges or universities before it is safe to do so. UCU must write to the government demanding that  a set of criteria is agreed with the union before we go back.

We will need to make clear to them we will not accept their ‘business as usual’ model, not now nor after the Coronavirus crisis is over. We also need to make clear that we won’t allow Johnson, Sunak, Patel, Gove or Hancock to put profit before our lives.

Millions of working people have demonstrated their heroism in this crisis which has not been matched by their political leaders. The system is tragically failing millions of people. The deception that the system works fairly for everyone has been exposed as a lie.

We must break the shackles of illusion.