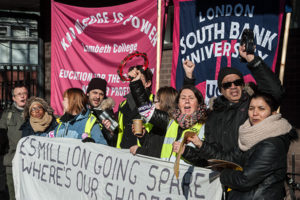 UCU Left Steering Committee would like to notify supporters and members that Mandy Brown (Lambeth College) has stepped down from Secretary of UCU Left following her movement back into higher education as a student. Mandy has been a stalwart and formidable fighter for workers’ rights throughout her time as a lecturer in FE.

Mandy played a leading role in transforming our union into one that is prepared to fight back against austerity, injustice and for education for all. From Action for ESOL, contract and pay strikes at Lambeth College to the role she played as London Region UCU Secretary working to build action across both FE and HE on pay and on pensions, she has been the central organiser. People will remember the demonstrations in London during the great USS strike, in snow, sleet and freezing weather. Mandy was instrumental in ensuring the fight for migrant rights was, and remains, at the heart of UCU’s agenda. The union’s affiliation to Care4Calais was built through the solidarity visits to the refugee camps, meetings and actions that she helped to instigate alongside NUT activists.

Jo McNeill (Liverpool) and Mark Abel (Brighton) will attempt to fill her shoes. Mandy will be sorely missed by her friends and comrades for her tireless hard work and political organising and will be missed by members across the sector. Whatever she does in the future we know she will continue the fight for socialism.

We all wish Mandy well in her future studies and send her our very great thanks. Send her your own message: Mandy on twitter @BelleTolls