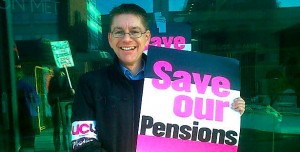 Mark Campbell works as a lecturer in computing at London Metropolitan University. He has been on the UCU Co-ordinating Committee at London Met for the past ten years, where he has played a central role in the many battles that UCU has fought alongside the other campus unions and the student body to defend jobs and course provision.

Mark has served on the National Executive of UCU for the past four years, and has played a prominent role in helping to develop active campaigning strategies for the union. He has also represented UCU at successive TUC Congresses.

As an active socialist Mark has pledged that if elected he will only draw the salary he currently receives at London Met with any increases that the union wins for its members. The remainder of the General Secretary salary will be donated to the union’s strike fund

This election takes place against the backdrop of the greatest assault on living standards and public services that we have faced in generations.

Our union faces a huge challenge to defend post- 16 education and we need to ensure that we are ready for the fights ahead.

30 November showed the potential to win on pensions. However, the latest offer on TPS still leaves us paying more to work longer for less.

Our NEC rightly voted to reject the offer alongside our sister unions the NUT and PCS, and agreed to make firm proposals to other public sector unions for more co-ordinated action, with a UK wide strike in early March..

✪ defending pensions and resisting real terms pay cuts across FE and HE;

✪ replacing the discredited Institute for Learning (IfL) with a voluntary member-led body;

✪ reforming governance – we are educational institutions, not businesses.

To address these issues we need to look to our organising and industrial strength. It follows that we need a strong and democratic union: well- organised branches, and well-trained officers.

We need as many members as possible involved in the union’s democratic structures – from local branch activity to attending regional committees, Congress, and our HE and FE Sector Conferences. Our National Executive Committee must reflect all of the union’s constituencies fairly and equally.

I am standing for General Secretary because I believe we can fight back, and we can win. We need an alternative vision of the privatised, market- led system that the current government wants to impose on education and society as a whole.

A vote for me is a vote to build a union that can meet these difficulties, a union that is representative of all the diversity, talent and strength of our membership.

This is taken from marks election leaflet which can be found here, a number of people have already endorsed Mark as their preferred candidate in the up coming election, you can see what some of them have said here and endorse Mark’s candidacy here.