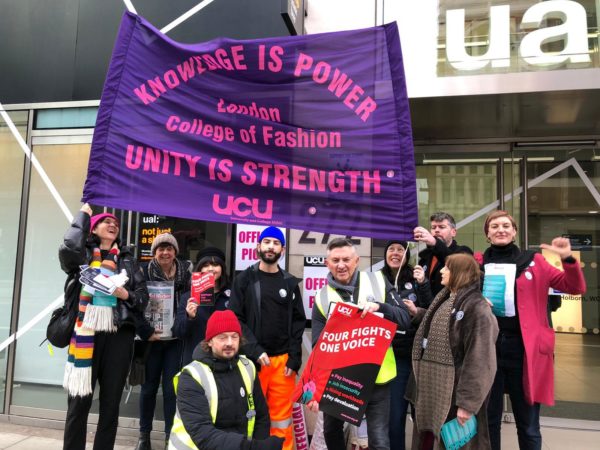 UCU members in Higher Education have voted overwhelmingly to reject the employers’ offer to settle the Four Fights dispute. 61.2% voted Reject, 38.8% to Accept on a 30% turnout.

This is an important result. UCU members have decided that the offer was not worth all the sacrifices that we made, including the 22 days of strike action. They are right — the offer gave no guarantees on casualisation or gender pay, speaking only of ‘expectations’ that employers would engage in, using existing consultation arrangements to ‘move in the right direction’. There was no commitment to ban zero hours contracts, despite such contracts being illegal in some countries. And there was no requirement to come to local agreements with unions or even to engage with them properly if there were not existing mechanisms to do so.

On race pay there was virtually nothing, and the employers insisted on treating workload allocation only under existing provisions regarding stress and health, rejecting our demand that workload models should be agreed in every institution. And, of course, there was nothing on pay.

In the context of huge and savage assaults on jobs, with potentially hundreds of thousands of casualised jobs going — and many already have — plus attacks on pay and conditions, a reject vote is exactly the right message to send to our employers. It signals that members still want to fight against the effects of marketisation, now exacerbated by Coronavirus, on a UK-wide basis, not institution by institution.

At last, a Higher Education Sector Conference (HESC) has been called to draw up a national response to the attacks on jobs, pay and conditions being pushed through by institutions under the cover of Coronavirus. Whether we revive the terms of the 4 Fights dispute or draw up a new claim in light of the latest attacks as the HEC motion suggests, is a secondary question.

We need a national strategy in defence of HE and our jobs.

This needs to include a commitment to fight all job losses, starting with casualised workers and against all worsening of terms and conditions. It needs to include the demands of the 4 Fights in relation to casualisation, workloads and an equality pay claim, and address the intersectionality of the pay gap whilst strengthening the emphasis on the race pay gap and employment of black staff.

Crucially, it needs to reject the idea of pay cuts implicit in HQ’s ‘Jobs First’ strategy. This is a policy that has never been endorsed by union members, but it would erode terms and conditions, and fracture national pay arrangements without defending jobs, especially of casualised staff.