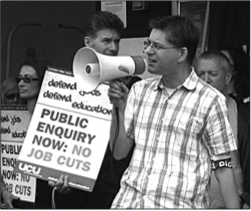 s a member of the UCU Coordinating Committee at London Met for the last ten years I have been in the forefront of our continuing fight to defend jobs and courses and played a significant role in our successful 18-month contract dispute, and union recognition dispute.

An active and committed trade unionist all my working life, I joined NATFHE in 1997 whilst hourly paid at the University of East London.

UCU has a key role to play in mobilising an effective defence of publicly-funded, socially inclusive, higher education. To do this we need to:

Defend pay and pensions, resist job losses and increased workloads. The employers aim to roll back wages and pensions, shed staff in subjects that don’t fit their market priorities, and intensify the workload for those left to pick up the pieces. UCU need to reject attempts to make our members pay for an economic crisis we are the victims of.

Be prepared to take effective, coordinated, industrial action to defend our universities from Government austerity measures and local management cut-backs and ‘restructuring’.

Defend academic freedom by using the union’s power to defend members’ academic independence from the strictures of the REF and from the ‘pedababble’ of academic audits.

UCU must defend our members’ freedom to set their own research agendas and disseminate results in ways they deem appropriate, to design and implement teaching free from the interference of employer-led boards. We must reassert collegiality and democracy in university governance.

Value all our members and campaign hard for our most precarious – hourly paid lecturers, Graduate Teaching Assistants, and junior researchers – all currently on a variety of exploitative casual contracts.

Build strong, democratic, member-led branches that reach out to all our potential allies on campus and across society for whom the Government’s assault on post-16 education, and education’s reorientation toward business training, is a betrayal of hope and an assault on an inclusive and democratic society.

Have a union leadership that is fully accountable to members and which actively implements democratic decisions taken at our branch-based delegate Congresses and HE Conferences.

Biographical Information, including service to the union

Please also vote for me for general secretary, and for Angie McConnell for Vice-President (FE)