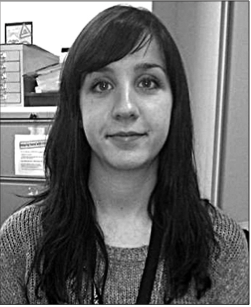 I am a 24 year old hourly paid lecturer at Westminster Kingsway College and have been teaching for three years, mainly in Additional Learning Support and A Level Sociology. I joined UCU and the branch encouraged me to become involved as a new member and hourly paid lecturer.

Since 2010 I have been the Casual Workers Rep on branch committee, a member of the union’s Young Members Steering Group and a regular delegate to London Regional Meetings. I
at all levels of the union. We need a unified approach to stamp out casual contracts, for the benefit of every UCU member.
am also a member of UCU’s Anti- Casualisation Committee. I have been a delegate to Unite Against Fascism Conference and this year I was proud to be a delegate to UCU’s Annual Congress.

With the huge success of November 30th and increasing membership we should be proud of UCU’s lead in the fightback across the public sector.
We should defend the education we provide, whilst demanding a better education for all.

With devastating cuts facing FE the threat of increased casualisation is becoming critical for hourly paid lecturers (HPL) and Agency staff but also for permanent staff.

Employers are increasing the proportion of casualisation, which could help drive down wages and conditions for all working in the sector. It is essential that UCU supports every member.

It is important to raise the profile of the anti-casualisation campaign at branch, regional and national level. Within my branch, I have been supported by a network of reps campaigning to fractionalise staff. I’m active within the London wide anti- casualisation campaign which unites FE, HE, HPL and permanent staff.

At UCU’s Annual Congress I helped move Anti Casualisation Committee motions ensuring the campaign was driven through at all levels of the union. We need a unified approach to stamp out casual contracts, for the benefit of every UCU member.

If elected I will regularly report back to the Anti Casualisation Committee and London Region and work with the HE casualisation rep to ensure anti-casualisation issues are up front in the union’s bargaining and campaigning agenda.

I am a UCU Left supporter, believing UCU must be a democratic member- led union based on strong branches. Therefore, I’ve supported the successful lesson observation boycott at Westminster Kingsway College, which required a high level of membership involvement.

I oppose IFL fees and as a new teacher want to defend pension rights and sustain the scheme for those retiring sooner.

In the huge fight over pensions, wages and job cuts, we must listen to and involve members and show a clear lead in organising to win.
Leaflet downloads are available from here.